UNSC starships[1][2] were Human starships operated by the United Nations Space Command (UNSC) and it's various branches and forces.

In the UNSC, ships can also be operated by different departments and branches. Warships like the UNSC In Amber Clad were often operated by the UNSC Navy.[3] UNSC Navy ships were deployed by UNSC Fleet Command.[4] In the case of the UNSC Swift Justice, it was operated by the Incident Response and Investigation division of the UNSC.[5] The UNSC Department of Commercial Shipping also operated a number of Freighters.

The UNSC Department of Commercial Shipping operated its own identification codes for freighters that were primarily used in COM transmissions.[12]

UNSC ships were organized into fleets; specifically numbered expeditionary fleets and named defensive fleets. Further down, ships were arranged into battle groups.[13] As well, squadrons were a type of tactical grouping for support ships early in the Covenant War,[14] but by the end of the war were relegated to a type of administrative grouping.[13]

Often, naval groupings had a flagship from which commanding officers lead their groupings from.

It is expected of all navy ship personnel to participate in working parties. The working parties help with routine maintenance and replenishment.[15]

UNSC Starships were often given a Ship Director, an AI who could manage much of the ship's tasks with the Captain's authority. Generally, these AI were "Smart".[17]

Children were sometimes born on board UNSC ships as well, with children being born on the UNSC Savannah and the UNSC Grafton.[21]

Several procedures affected the operations of UNSC ships as well. Prior to crash landings, active cryo pods were to be ejected into space.[22] The Cole Protocol also affected the possible destinations of ships.

Navy personnel UNSC ships often follow old naval tradition. Boarding a UNSC warship is considered a ceremony, not a formality. When boarding a ship, the boarder requests permission from the officer on deck. The officer on deck will reply with a curt "Very well".[15]

"Dead fleets" or "paper fleets" are maintained as tradition and to honor those who died while serving. Inadvertently, some starships will be attached to these fleets by bureaucratic error. Many crewmen regarded this as a bad omen.[13]

The Infinity being repaired over Earth while an Autumn-class is completing a float out.[23]

The UNSC generally had construction facilities in orbit of planets. Tribute, and Mars had ship building yards.[24][29] Reach also had its own ship breaking yards that decommissioned ships were sent to.[30] Earth as well had orbital facilities for repairs and float outs.[23] The UNSC Cradle on the other hand was a mobile Refit station that could travel to ships.

A cleaved Forward Unto Dawn, exposing the deck layout.

Design guidelines for ships emphasize that the command crew should have visibility of the surrounding exterior area of the ship. This is usually achieved through windows on the bridge.[31]

UNSC ships have an internal deck naming structure. On most ships, the Hangar deck is considered Zero Deck. Decks below that are "belowdeck" and are numbered in descending order starting at First Deck. Everything above the hangar deck is a "level", starting at Level One and going in an ascending order.[32]

Facilities to create simulated War Games training sessions could be found on several ships. Though they were mostly on post-war vessels and most prominently on the UNSC Infinity.[33]

Cryo chambers were an important feature that allowed the crews to travel large distances without aging as much. Cryo facilities were often large and individual chambers displayed crew member names.[37]

Crew quarters on UNSC navy ships vary by ship type. Halberd-class light destroyers crew quarters were cramped[42] with members being allocated a single sleeping pod that would sometimes need to be shared when the ship has additional crew.[31]

UNSC ships had docking capabilities, though the exact details are dependent on what the ship is docking with. Stalwart-class light frigates were capable of docking with Moncton-class orbital weapon platforms.[8] Class-L flash-docks routinely held frigates and corvettes, though the UNSC Pillar of Autumn was able to use one.[30]

The MAC of a Stalwart-class frigate.

A number of UNSC vessels, particularly those under the control of the UNSC Navy are equipped with weaponry.

MACs are massive coil guns that are used to accelerate multi-ton projectiles at extremely high velocities. These projectiles were a super-dense ferric (iron) tungsten shell.[43]

As an example, frigate based MACs are capable of firing their slugs at roughly 30,000 meters per second.[43] UNSC Infinity has miniature MAC guns along its hull, to compliment its built in, larger MAC guns.[44] 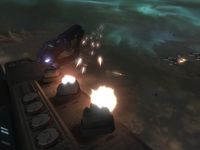 D77H-TCI, a model of the ever present Pelican Dropship.

Attached to various UNSC vessels are a number of small craft. Some were operated by other branches of the UNSC. The F-41 Exoatmospheric Multirole Strike Fighter, for example, was most often operated by the UNSC Air Force.[45] The ubiquitous Pelican was operated by several branches including the UNSC Marine Corps.[8]

Some starships, like the UNSC Pillar of Autumn, had lifeboats for the crew. The most known ones were the Bumblebee series.[46]

The time of the Insurrection saw a number of class additions and developments to the UNSC's fleet. In 2493, the Valiant-class super-heavy cruiser entered service. Though serious cost problems over five years cast doubt in the class' future.[47] At some point in the Insurrection, a new carrier, the Orion-class assault carrier, was built to help with ground operations.[48] One of the last known class additions during the Insurrection was the Halcyon-class light cruiser. In 2510, the class first entered service.[49]

A few UNSC starship classes during the Human-Covenant war.

Course of the war[edit]

"We returned to Harvest with enough firepower to assault the vaults of heaven."
— Preston Cole discussing Battle Group X-Ray at the Battle of Harvest.[50]
Main article: Massacre of the Outer Colonies

In 2525, the UNSC would strip away the CMA's naval resources and give them to NAVCOM.[51] As well, the UNSC would begin to take over the Colonial Administration Authority in the midst of the Human-Covenant war. With these additions, the UNSC received several different types of ships. This included the CAA's Springhill-class mining ship[52][53] and the Diligence-class from the CMA.[54] Both of which would be brought back to service or continued service such as with the UNSC Kronstadt and the CAA Heavy Burden.

Impressive fleet actions characterized the early war. 40 ships of Battle Group X-Ray fought a single Covenant vessel over Harvest,[55] over 100 ships saw action in the Battle of Alpha Aurigae[50][56] and another 70 clashed with the Covenant at the XI Boötis A system.[50] However these actions were tempered by large losses in each; 13 ships destroyed at Harvest,[55] 37 lost at Alpha Aurigae,[50] and 30 destroyed at XI Boötis A.[50]

The war saw combat losses far outstripped shipyards' abilities to build replacements for both military and commercial ships. Trade restrictions were also put in place to limit the risk that slipspace travel represented to remaining colonies.[57] Over the course of the war, the Fleet of Particular Justice destroyed 120 ships[58] and 185 UNSC capital ships were destroyed by Writh Kul's Dagger of Mercy.[59]

End of the war[edit]

The UNSC Iroquois and a frigate staring down the Second Fleet of Solemn Accord over Sigma Octanus IV.

By the final year of the war, a majority of the UNSC's ground forces had been consolidated at Reach and at Earth. For many colonies, it was only the ships of the navy that were reminders of the UNSC and gave aid to those cut-off. Though in many instances, the Navy couldn't afford the loss of ships and personnel, often leaving these colonies to their own devices including destruction by the Covenant. No appreciable differences could be seen in expeditionary and defensive fleets as the UNSC lost the ability to conduct offensive naval operations. Navy AIs by this point were still assigning ships to squadrons, though at that point they were administrative groupings that had lost meaning over the course of the war. As well, numerous fleets only existed on paper, having been destroyed in lost sectors years prior.[13]

With over 152 ships present at the Battle of Reach,[60] a large number of these ships were destroyed. This included many capital ships such as the UNSC Trafalgar, the flagship of the Epsilon Eridani Fleet and pride of the Navy.[61]

Starting September 5, 2552 all remaining UNSC starships and their fleets were consolidated under a single command grouping under the UNSC Home Fleet.[62] Numerous ships arrived at Earth on October 20, 2552.[63] The ships above Earth would then go onto engage Covenant forces when they arrived the same day with a very large contingent of UNSC vessels and fleets that was later destroyed by overwhelming Covenant reinforcements on November 17, 2552.[8][64] By the end of the war, the plethora of UNSC starships had been reduced to only a few hundred.[65]

The UNSC Infinity-class supercarrier, the largest UNSC vessel, and the Autumn-class heavy cruiser.

Following the Human-Covenant war, the surviving UNSC starships were brought back to Sol to be repaired, refitted, and counted.[65]

A variety of starship classes and several ship improvements that were created during the war finally became commonplace. The Autumn-class heavy cruiser, the Strident-class heavy frigate and the Infinity-class supercarrier were all added to the fleet. All three have shielding,[66][67] an unprecedented addition to UNSC ships.

As part of ongoing offences, UNSC Strident-class frigates and Anlace-class light frigates were being deployed to the Outer Colonies to route out Covenant remnant occupiers.[24]

During the Created's Reclamation, many UNSC starships were disabled by Guardian Custodes.[68] Some ships, were ripped out of Slipstream Space with the activation of the Guardians, like the UNSC Nereid.[69] Shipboard AIs from numerous starships also defected to the Created.[68] 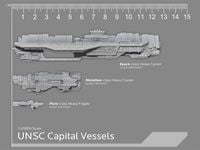 A few UNSC warships and their sizes compared to one another.

Several types of support ships that were used include the stealthy Prowler and its subtypes. Other stealth ship classes existed including the Chiroptera-class subprowler. There was also the incredibly small sloop. Another type of ship that was used by the UNSC was the Calypso-class exfiltration craft. Following the UNSC's take over of the CAA, the Springhill-class mining ship helped build materiel for UNSC forces.

The UNSC employs a number of warships including frigates, destroyers, cruisers, and corvettes. The Vindication-class was unique as it was a Battleship, an uncommon warship in UNSC ship design and classification.

UNSC carriers were among the largest, most heavily armed ships the UNSC possesed. Two carrier classes were so large that frigates could dock with them; the Punic-class supercarrier and the Infinity-class supercarrier.[72]

Concept work for the "UNSC Frontend".

A few UNSC craft have appeared in officially created, but non-canon materials. The UNSC Andraste was a ship that appeared in a piece of concept art for Halo 3.[74] The UNSC Frontend, an M-class carrier was the center piece of a cancelled idea for Halo Wars 3. The UNSC Olympus[75] and the UNSC Sword of Ascalaphus was concepted for Halo Infinite.[76]

In Halo 4, the Charon-class UNSC Forward Unto Dawn is depicted as a modified Strident-class. This depiction is non-canon.[77] The Strident-class itself is also depicted differently across multiple media.