The Art of Halo Infinite

The Art of Halo Infinite is an artbook which released on December 14, 2021, that focuses on Halo Infinite. It documents the artwork included in the game, and the process it took to create it, starting at the concept art phase, all the way through until the game launches. It features a cover created by Nicolas "Sparth" Bouvier, and was published by Dark Horse Books. The book was originally listed as set to release on December 29, 2020, though following the delay of Halo Infinite was listed as releasing on June 29, 2021 and then listed on December 31, 2021 - however, these dates were placeholders given by Amazon, with the book's proper release date later announced in September 2020.[2][1]

For the September 2021 Technical Preview, a number of concept art files used as loading screens internally were accidentally kept in the Flight files. Rather than delay the release, 343 Industries opted to release the files for free download alongside several previews of the book's interior. These files can be found in the gallery section below, or in the blog post linked here.[3]

An additional deluxe edition variant of The Art of Halo Infinite was additionally released, containing several art prints and a unique cover and slipcase inspired by the MJOLNIR GEN3 armor worn by John-117.[1][4]

The unique cover on the deluxe edition contains an additional text message in the print, recounting the successful completion of Operation: WOLFE, as depicted in Halo: Shadows of Reach; 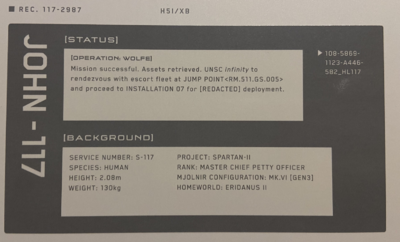