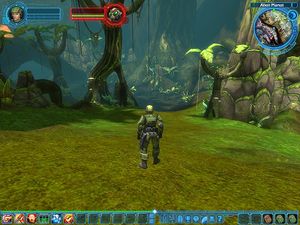 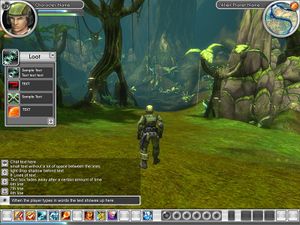 "Ensemble has been wanting to make an MMO for a long time. That was in production for a long time. The Halo IP was a great IP to launch an MMO with. Microsoft... hasn't had the best track record with those.
And we worked on it for a long time--we had staffed up an almost-40 person team. And then there was some reorganization at Microsoft, and the new bosses thought it wasn't the best idea anymore. It had actually been green-lit, and then it got cancelled after that."
— Dave Pottinger[1]

Titan was the codename for a canceled Halo massively multiplayer online role-playing game (MMORPG) developed by Ensemble Studios between 2004 and 2007.[2] Following the project's cancellation in 2007, Ensemble Studios focused all of its resources into developing Halo Wars.

Titan was a prototype game developed to compete against Blizzard Entertainment's World of Warcraft. The project was internally cancelled in mid-to-late 2007 with no formal announcement of its development by Microsoft.[3] The game was to have been set in the Forerunner-era.[4]

Around 40 staff in three teams worked on Titan while other Ensemble's staff focused on developing Halo Wars, though one team remained on the project for six months.[1][3] During the early stages of Titan's development, Ensemble took inspiration from World of Warcraft's general structure and gameplay.[5] The project was said to be radically different in the later stages, exploring then-novel concepts and gameplay additions such as "heroic stylized artform" and cover system (later used in Star Wars: The Old Republic), and public quests (later used in Warhammer: Online).[6] Instead of mana points as used in World of Warcraft, a character's special ability energy was referred to as psion.[7]

By the time of the project's cancellation in 2007, Ensemble had a server infrastructure for the game, a World of Warcraft-scale gameplay zone and many of the vehicle and gunplay mechanics in a playable state.[8]

During the game's development, a number of concepts were produced by Ensemble Studios. The full concept art gallery can be viewed here.

In 2008, user "goneisgone" uploaded an album of images of the Titan prototype to a Flickr gallery. These images are archived below, and can also be found here. Ensemble Studios employee Shannon Dees additionally uploaded several images to her Tumblr blog here.[9]