(Redirected from Kat-B320)
This article is about the SPARTAN-III. For the creator of the SPARTAN-II program, see Catherine Halsey.

"In recognition of this, her unparalleled brilliance, we honor her as the true genius of Noble."
— The Monument to Noble Team.

Lieutenant Commander Catherine-B320,[4] otherwise known by members of her team as Kat, was a SPARTAN-III commando of the UNSC Naval Special Warfare Command, attached to Special Warfare Group Three of the UNSC Army.[3] She fought alongside other members of NOBLE Team under the designation Noble Two during the Fall of Reach in 2552.

Kat was born in Monastir, New Harmony in 2530. Her father was killed in action on Harvest and her mother died of cancer in 2536, so she was raised by her grandmother, a retired Army General; this fact made her conscription into the SPARTAN-III program politically inconvenient.[1] However, when Kat's grandmother was killed during the fall of New Harmony, ONI seized the chance to induct Kat as part of Beta Company.[1] Along with the rest of the company, she was initiated and began training circa 2539.[5][6][Note 1] Because of her skill and potential, she was marked for a special assignment shortly after her augmentations, and was eventually taken out of the general population of Beta Company by Kurt Ambrose and Franklin Mendez after Operation: CARTWHEEL, not long before the disastrous Operation: TORPEDO commenced.[1][7] When NOBLE Team was formed sometime later, Kat, Carter-A259, and several other Spartans were assigned to the unit.[1][8]

On April 22, 2552, Kat put together an operation to destroy the Ket-pattern battlecruiser, Sanctity of Purification, maintaining position above a city on Fumirole.[4] The operation was successful, but at the cost of Thom-A293. The operation also cost Kat her right arm, which was replaced by a robotic prosthetic.[2] Kat clearly has no problem working with the arm, which she moves just as naturally as her real one, even continuing to hold her M6G pistol in her dominant right hand. Both Kat and Carter took responsibility over the death of Thom, unable to admit that the death of the SPARTAN was his own fault. Thom was replaced on Noble Team by SPARTAN-B312 a few months later, just prior to the Fall of Reach.

At some point during her career, Kat developed a bypass system for the MJOLNIR armor's safety limiters on their actuators and "muscles", allowing a short burst of superior performance at the expense of the suit's coolant systems, leading to overheating.[9]

Kat returns the data module she stole from Visegrád to Dr. Halsey during Noble Team's debriefing at SWORD Base.

The SPARTANs of Noble Team participate in an operation to investigate a communications blackout at the Visegrád Relay, a mission that led to the first confrontation with Covenant forces on the planet.[10] During the operation, Kat recovered a data module containing Professor Laszlo Sorvad's "latchkey discovery" from the Relay's console and uncovered an unfortunate discovery; the Covenant had successfully deployed their forces on Reach.[10] The discovery led the team to SWORD Base, currently under siege by Covenant forces and their corvette.[11] Kat and Noble Six engaged the Covenant forces on foot and repelled them off the site and the airbase. The team was debriefed by Dr. Catherine Halsey following the attack, and Kat returned the module containing Sorvad's data.

The destruction of the UNSC Grafton by a Covenant Sh'wada-pattern supercarrier, Long Night of Solace, after the battle prompted Carter and Kat to reassess the situation. Recognizing the presence of the supercarrier as a large threat, Kat suggested to Noble Team to reconfigure a slipspace engine into a makeshift slipspace bomb, which would destroy the supercarrier immediately.[14] Carter, along with Kat, Jorge-052 and SPARTAN-B312, helped UNSC ground forces repel Covenant invaders from a UNSC base, which housed the Sabre Program Launch/Research Range. Noble Team was separated from this point, with Jorge and Noble Six participating in Operation: UPPER CUT while the rest focused on groundside operations.[14]

At some point during the Fall of Reach, Kat and the remaining members of Noble Team assisted the UNSC in repelling the Covenant from civilian population centers. They reunited with Noble Six during the Siege of New Alexandria and helped in the neutralization of Covenant jammers and the evacuation of ONI personnel.[15] Soon, Noble Team was hailed by its superior, Colonel Urban Holland, and was ordered to destroy Sword Base. The team was forced to enter a radiation bunker to shield them from the Covenant's glassing of New Alexandria. As Noble Team exited the elevator and ran towards the bunker, a Sangheili Field Marshal of the Devoted Sentries in a Phantom overhead shot Kat through the head with a needle rifle, killing her instantly. When the surviving members of Noble Team were extracted on August 26, Carter carried her body out of the bunker.[15] 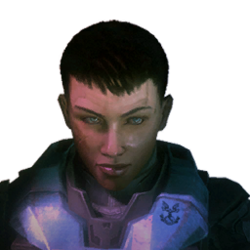 Kat generally exhibited a sardonic attitude and had a dry sense of humor. She was described as brilliant, athletic,[1] an inspired tactician and exemplary combatant. She was also noted for her skills as a cryptanalyst and a hacker; allegedly, there had not been a system yet that she has been unable to crack. According to Colonel Urban Holland, she had a habit of occasionally investigating classified intel more than her superiors would like her to. Her ability to acquire and digest information has been described as "supernatural"; more than once, she was able to read a situation, working with information many would find overly limited.[4]

Kat shared a close bond with Noble Team's leader, Carter-A259 due to the two being the only survivors of the original roster of Noble Team.[1] She acted as Carter's second-in-command and was fiercely loyal to him and the team. Carter greatly valued her tactical input and planning ability and was particularly upset about her death. Much like Carter, Kat blamed herself for Thom-A293's death while it was apparent that neither was responsible; according to Colonel Urban Holland, Thom died because he pursued a group of enemies by himself rather than waiting for backup.[4]

Kat wore MJOLNIR Mark V armor with an Air Assault helmet upgraded with a Command Network Module. She wore FJ/PARA shoulders on either arm and had a Tactical/Hard Case utility on her left thigh. Kat also notably sported a robotic prosthetic in place of the right arm she lost during an earlier operation.