New Alexandria was a metropolitan city located on the supercontinent Eposz, on the human Inner colony world of Reach.[2] The city was located on the shores of an ocean.[3]

The New Alexandria starport, with the city center in the background.[5]

In the city center, a central MagLev train line connected some of the buildings, terminating at the Nomolos Tower. Closer to the city's cargo port, numerous container transport tracks crisscrossed in the space between the lower levels of the buildings. Three space elevators as part of the Delphi Triple-Strand Network were located on the ocean north-west of the city. Notably, the city was also the location of the UNSC's Fleet Command Headquarters and the ONI Olympic Tower.[1] Two known areas of the city are Downtown New Alexandria (which housed the Sinoviet Center) and Lower New Alexandria (which was home to Caracalla Park).[6]

Throughout the war with the Covenant, the population of New Alexandria largely lived carefree under the assumption that the attacks occurring in the Outer Colonies would never happen to them.[7]

The city became the target of a Covenant attack during the Fall of Reach in 2552, which resulted in the five-day Siege of New Alexandria. Although several civilian transports successfully evacuated the city thanks to the efforts of Noble Six, the city was ultimately glassed by the Covenant.[1][5]

At some point after the Human-Covenant War the city was reconstructed to some effort, and a statue to Noble Team was built at Hősök tere as a memorial.[4] 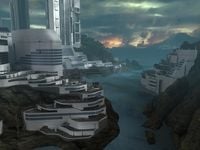 The city was governed by the New Alexandria City Council.[5]

Unlike on Earth, where most cities have grown across the centuries and often feature a mix of architecture from different eras, New Alexandria and Reach's other cities were "planned communities"; the buildings and infrastructure were prefabricated units designed and built into a cohesive urban habitat from the start.[8] The city's architecture and overall design reflected this; conventional streets were a rarity, and a large part of the city consisted of massive high rises of sleek design.[5] Connecting the skyscrapers were lofty, garden concourses letting pedestrians have scenic travel paths.[6]

New Alexandria was apparently known as "Manassas" during the development of Halo: Reach.[9][10] However, New Alexandria and Manassas were turned into separate locations.