"We are outnumbered and we are outgunned but our spirit is stronger. Wars may be fought with weapons, but they are won with soul."
— Ilsa Zane

The New Colonial Alliance (NCA) is an Insurrectionist group that was founded by UNSC Admiral Mattius Drake some time prior to January 2553.[1] 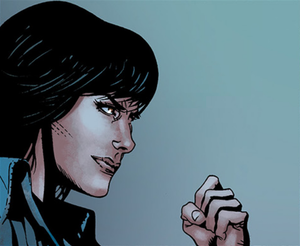 Ilsa Zane, the leader of the group that attempted to capture Infinity.

In January 2553, elements of the NCA led by SPARTAN-IV defector Ilsa Zane infiltrated the UNSC Infinity disguised as construction personnel and captured most of the bridge crew, using them as hostages. They then secured the ship's bridge in the hope of capturing the prototype UNSC flagship, threatening to vent the ship's atmosphere and kill everyone aboard it.[2] The attempt was foiled by Spartan forces aboard the Infinity and the boarders were all killed or captured. The prisoners revealed Admiral Drake as the organization's leader.[1]

Prior to March 2558, Captain Daniel Clayton, the illegitimate son of war hero Captain James Cutter, joined the New Colonial Alliance. Clayton served as executive officer to Rear Admiral Horatio Temkin, the UNSC's ambassador to Sanghelios, giving Clayton access to classified information.[3] The captain informed Shipmaster Vata 'Gajat, a Sangheili mercenary from Jul 'Mdama's Covenant faction about the negotiation attempts between the Sangheili and Jiralhanae on Ealen IV. 'Gajat's forces foiled the negotiations when they attacked during the middle of the summit. Spartan Vladimir Scruggs, one of the Spartans deployed to protect the diplomats, was actually a double agent for the NCA and was tasked with killing the lead negotiators.[4]

As the ex-Covenant mercenaries distracted the envoy's bodyguards, Scruggs killed Spartan Fireteam Jackknife and the Jiralhanae and Sangheili warriors accompanying him. After informing Clayton of the act he informed Commander Palmer that the area was secure. Scruggs then took Fleet Admiral Terrence Hood hostage. Though he did not compromise his employer, Scruggs tried to convince Palmer that he knew of secretive machinations behind the UNSC and the Arbiter's inability to make peace with his enemies. Palmer killed her turncoat comrade before he could reveal anything further. Following the battle Fleet Admiral Hood and Captain Lasky of Infinity discussed that Scruggs could not have been the informant who led 'Gajat to Ealen IV; they realized that the security breach involved someone with much greater security clearance.[4]

After their failed assault on Ealen IV, 'Gajat and Captain Clayton lured Admiral Hood and the UNSC Infinity into a trap. They launched a freighter, the Pilgrims' Pride, which sent out a distress signal that was later picked up by Infinity. When Infinity arrived in the Artesia-702 system, it found the damaged freighter leaking atomic matter with faint life signs aboard and tugged the ship into one of its deployment bays. An ambush was sprung within the bay when the freighter set itself to self-destruct and multiple UNSC aircraft exited its cargo bay. The attack was repelled and Infinity later discovered the assault crafts used were from the UNSC Spirit of Fire.[5] Infinity tracked the freighter's origin to Oth Lodon where it found a Covenant space station operated by NCA forces. Captain Clayton revealed himself and his motives to Lord Hood and fired on Infinity with the station's energy projector.[3]

After firing several times the cannon overheated, forcing Clayton and the others to wait to bring it back online. The station then detected several OF92 Booster Frames and he ordered the station's smaller arms online. He asked 'Gajat to keep Infinity busy until they brought the cannon back online. 'Gajat however, questioning Clayton's vision, decided destroying the ship would get his faction more notability than working for Clayton. Five Spartan-IVs boarded the station and seized control of it, ordering everyone to freeze. Clayton told them not to listen, asking the Spartans if they knew who he was. One of them said they did know him and knocked him out with their sniper rifle for killing his friend Paul DeMarco during the Battle of Ealen IV. 'Gajat was killed when the Spartans aimed the station's energy projector at 'Gajat's ship. Clayton and the others were captured and brought aboard Infinity, and Clayton was transferred to Midnight Facility.[6]

On the remote human colony of Conrad's Point, the NCA rebels and mercenaries were undisciplined and being poorly led by an unidentified colonel. The colonel would be relieved of command when Ilsa Zane arrived on the planet. Zane organized the rebels into a more formidable force, operating ruthlessly and killing anyone who didn't carry their weight. Under her command the NCA forces on the colony started to prepare for war with the UEG and accumulated a large amount of nuclear weaponry. In 2558, a Forerunner Guardian was activated on the colony, causing large-scale destruction to one of its cities. All NCA forces on the colony were sent to secure the site of it and sought to search the ruins for clues of the Guardian's next site of attack. Not willing to let the Guardian site fall into the NCA's hands, ONI tasked Commander Maya Sankar to go undercover as the insurrectionist leader "FERO" and gather information by infiltrating the NCA, with the help of the AI Black-Box. After rendezvousing with her contact Ari Rezneck, they moved into the NCA encampment and discovered that the insurgents were celebrating the apparent death of Spartan-II John-117. ONI discovered Zane's presence in the camp and had warned Sankar of an incoming UNSC airstrike. Gaining what information they could, they attempted to leave but the camp was put on lock down and were then approached by Zane herself. Zane revealed both of them to be ONI operatives, killed Rezneck, then attempted to kill Sankar but was halted when the airstrike began. As the compound was bombarded, Sankar fled the planet and Zane with her NCA forces attempted to stop her but failed.[7] Tracking down Sankar's group to Laika III, Zane and her NCA forces shot down her ship and pursued her, intending to kill Sankar and then secure the planet's Guardian to use as a weapon against the UNSC.[8] During their pursuit, they encountered UNSC and ONI forces and engaged them as the Guardian started to rise.[9]