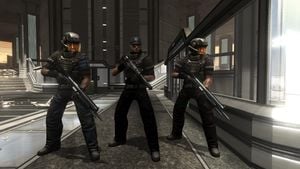 Police officers from the New Mombasa Police Department, one of the many human law enforcement agencies.

Law enforcement agencies, often referred to as police and sometimes termed civilian security forces,[1] are civilian organizations involved in the prevention of crime and apprehending criminals, maintaining public order, as well as other duties. These establishments are found on nearly all worlds within the Unified Earth Government's sphere of influence.

In the early 26th-century during the Insurrection, the law enforcement in Promesa became reputed for corruption amidst a multi-faction conflict between them, various Insurrectionist factions, and UEG peacekeepers.[2] The Colonial Administration Authority employed an organisation known as the CAA Marshals to serve as frontier sheriffs throughout the Outer Colonies.[3]

During the First Battle of Harvest, Utgard Constabulary officers patrolled the Utgard Mall. Two constables named Finn and Lars were the personal bodyguards of Governor Thune.[4]

Arcadian Patrol officers defended the colony of Arcadia from the invading Covenant forces during the Battle of Arcadia in 2531.[5]

The New Mombasa Police Department had a significant role in the defense of their city during the Battle of Mombasa, where they cooperated with UNSC Marines in various operations around the city.[6]

A riot officer in Hunt the Truth.

During the First Battle of Harvest, constables of Utgard Constabulary wore helmets, riot plating, and were armed with stun devices and plastic shields.[citation needed]

They often use lighter weaponry than military personnel, though in some circumstances there is overlap.

During the Human-Covenant War, police forces were known to employ military weaponry for the purposes of assisting UNSC forces in the defense of their cities against the Covenant invasion. During the Battle of Mombasa, NMPD officers working alongside the Marine and ODST units deployed into the city employed M6C/SOCOM handguns, M90 shotguns, M7S SMGs and MA5C assault rifles among other weapons.[7]

Law enforcement units were also known to employ the "Peacekeeper" variant of the Cyclops exoskeleton for riot control purposes,[10] with NMPD employing its own specialised "Sector 12" variant equipped with a riot shield.[11] Most units, however, would be destroyed in the war once pressed into active combat duty.[10]

Law enforcement agencies in some instances will use air vehicles as well. The D77C Pelican is manufactured for law enforcement needs, though the NMPD has their own offshoot of the design known as the D77C-NMPD Pelican.