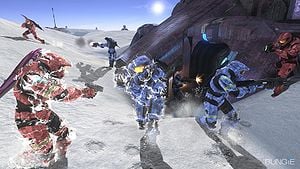 The shields on a pair of Mark VI MJOLNIR armor suits flare after taking damage.

Energy shielding is an advanced defensive technology making use of a field of energized particles that wraps around a surface, which deflects objects that attempt to impact the surface. Most energy shields are able to deflect various forms of damage, from material projectiles to directed energy streams. Several UNSC, Covenant and Forerunner vehicles, devices, and armor systems make use of energy shielding to protect users from harm.

Humans have used energy shield technology for a relatively brief amount of time. The earliest known example is the "bubble shield", a protective device developed and deployed by the Office of Naval Intelligence's Beta-5 Division,[1] which has been in service since at least 2544.[2] The Beta-5 Division also utilizes the "drop shield", a similar device which, despite being less resilient than the bubble shield, is capable of regenerating organic tissue through unknown means.[1]

Near the end of the Human-Covenant War, ONI scientists successfully reverse-engineered the technology used in Kig-Yar point defense gauntlets, leading to the technology's incorporation into the Mark V MJOLNIR Powered Assault Armor and all later iterations of the series. Energy shielding technology had previously been tested with the Grenadier variant of the MJOLNIR Powered Assault Armor/Mark IV,[3] though these tests were not successful.[4] The UNSC also reverse-engineered an "armor lock" plug-in module from functionally identical Covenant technology. In conjunction with the MJOLNIR armor's lock-down system, this device emits an impervious shield barrier that can deflect all small arms fire and can shed attached plasma grenades. The SPARTAN-III Headhunters wear an advanced version of the standard-issue Semi-Powered Infiltration armor which features energy shields that are similar to those of MJOLNIR, though the shields share power with the suit's active camouflage module.[5] With each new generation of armor, the shields were improved, an Unidentified master gunnery sergeant commenting that the Mark VI's shields were "much better than the Covenant tech we used for the Mark V."[6]

The UNSC has also developed energy barriers which are used to separate pressurized areas, such as hangar bays, from the vacuum of space. One of the UNSC's most recent breakthroughs in energy shield development came with the creation of the FSS-1000 Sabre orbital fighter, which is the first human spacecraft known to use energy shields. The post-war Mantis is another UNSC vehicle that utilizes energy shields. The post-war successor to the Longsword and Sabres, the F-41 Broadsword, is equipped with energy shields, though not powerful enough to travel through Slipspace.[7] Some warships also received shields post-war, with at least the UNSC Infinity, its embarked frigates, and the Autumn-class heavy cruiser possessing energy shielding.[8] 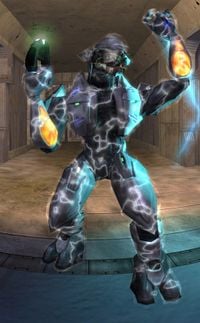 The Covenant make extensive use of energy shielding technology. Nearly all Covenant starships larger than a dropship use energy shields and several ground-based structures use shields as well. Many Covenant warriors are equipped with energy shields.

Most Sangheili, many Jiralhanae, and some high-ranking Unggoy and Yanme'e are equipped with energy shields that are integrated into the wearer's armor, or, in the latter case, carapace. Kig-Yar warriors use energy shield gauntlets that protect them from most oncoming fire but leaves them vulnerable to flanking attacks and grenades. The Covenant often use Huragok to provide energy shielding to troops on the battlefield. The Covenant also utilize overshields, which provide additional layers of energy shielding to the wearer, and energy shield regenerators. Sangheili and Jiralhanae warriors sometimes use armor lock systems, from which the UNSC technology was reverse-engineered; Jiralhanae are able to use this technology even without power armor.

Though the Hierarchs are not meant to encounter combat, their anti-gravity chairs emit powerful energy shields. They are able to deflect all forms of projectile, plasma, and explosive weaponry and seemingly never become depleted. However, one can simply walk through the shield. The shield used by Tartarus, the Chieftain of the Jiralhanae, was much different and seems to have to be actively turned on. His shield could deflect nearly all attacks save for those of a captured beam rifle. A similar, though much less potent, technology is often used by Jiralhanae chieftains; this "invincibility" device lasts only a matter of seconds, though it renders the user impervious to small arms fire. The device can also be used by personnel who do not otherwise possess energy shielding, such as UNSC Orbital Drop Shock Troopers.[9]

Nearly all Covenant vessels are protected by highly resistant energy shields. These shields can withstand an impressive amount of firepower and can recharge very quickly. Covenant vessels' shields can absorb almost all missile fire, including hundreds of Archer missiles and even a low-yield Shiva-class nuclear missile, although Shiva nukes will usually deplete their shields, making them vulnerable to smaller weapons. The only UNSC weapons capable of penetrating a Covenant starship's shield are the Magnetic Accelerator Cannons. Even then, ship-based MACs take multiple rounds to drop the shields; only high powered starship or a "Super MAC" round from an orbital defense platform can penetrate a Covenant ship's shields in one hit.

Covenant starship shielding does have a notable flaw, however: Whenever a starship launches a plasma torpedo or pulse laser, a small section of the energy shield must drop to allow the weapon to fire. Otherwise, the energy released would detonate on the inside of the shields, damaging the ship.

While projectile weaponry is generally ineffective against Covenant starship shielding, directed energy weaponry can disable shields with relative ease, in much the same manner as Sangheili energy shields. Another way to disable the shipboard energy shields is through the use of a large-scale electromagnetic pulse.[10]

The Covenant's Type-31 "Seraph" fighters are typically equipped with energy shields, though this does not seem to always be the case.[2] R'shwupa-pattern Phantoms are equipped with powerful shields that can deflect cannon fire but are vulnerable to missiles due to their lower velocity.[11]

The Covenant also use energy shields as hangar bay doors. These devices prevent the evacuation of atmosphere from the hangar bay and deny unwanted entry and exit. They can be phased in such a manner that atmosphere remains in the hangar bay while single ships can enter the vessel.[11]

Few Covenant ground and air vehicles are equipped with energy shields. The most notable exception is the Shua'ee-pattern Locust, a repurposed mining platform that is used as a "building killer". The Type-30 Locust emits a spherical shield that can resist most high-impact projectiles. However, this shield is rather weak and will dissipate under concentrated fire, exposing the Type-30 Locust's vulnerable hull. Type-32 "Ghost" assault vehicles and Type-26 "Wraith" tanks, while almost universally unshielded, can be retrofitted with energy shields that deflect most projectiles. The D'nomlhe-pattern Banshee, the post-Covenant War successor to the Type-26 Banshee, features numerous improvements, one of which is the implementation of energy shielding.[12]

The Covenant make extensive use of stationary energy shield devices. One of the most common is the energy barrier, which is used to cordon off restricted areas and to deny enemy movement within invaded cities.[13] This technology can also be used to form anti-vehicle barriers; though vehicles and projectiles are repelled by these barriers, human and Covenant soldiers can pass through them on foot.[14][15] Smaller-scale barriers, including man-portable ones, are often used to provide cover during firefights.

Pre-fabricated Covenant bases are often outfitted with shield generators; multiple shield generators can be installed at a base to provide incrementally greater protection.[16] The Covenant sometimes use enormous energy shield domes to cover large areas, such as bases. These domes sometimes have no apparent power source,[17] though they are also used on teleportation spires, which are commonly used during invasions.[18] These shield domes are susceptible to high-intensity plasma.[17] While Covenant aircraft can pass through these shields unharmed,[17] UNSC aircraft that pass through the field receive a powerful electromagnetic pulse and suffer catastrophic systems failures.[18]

Some Shade turrets are equipped with energy shielding. Some lighter versions have only frontal shielding, while anti-aircraft models have multi-directional shielding. 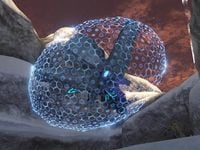 Many Forerunner constructs make use of energy shielding. Standard Forerunner Sentinels are encased within an ovoid energy shield that can withstand moderate damage, while the much more powerful Sentinels from the Onyx Shield World possess spherical golden shields that activate whenever a fast-moving projectile approaches. The larger Enforcers possess three-part energy shields that protect their photoreceptors and chassis from frontal assault, but do not protect against attack from any other angle. The majority of Forerunner energy shields seem to consist of a translucent bubble composed of hexagonal patterns, as opposed to the wraparound shields typically used by the Covenant and UNSC.

The Didact's ship, Mantle's Approach possessed powerful energy shields: they were able to withstand Earth's super MAC platforms with no damage. Infinity's specialized fore MAC guns were able to penetrate them, but only caused minimal hull damage. The Didact also used shields to protect his Cryptum on Requiem and the Composer's control area on Mantle's Approach. Cortana was able to fool the former shield with an override code and overload the latter with her rampant personalities.

The Forerunners made ubiquitous use of hard light technology, consisting of solidified photon-boson fields shaped into any desired form,[19] such as light bridges. Hard light was also used to create infantry-issue shields.