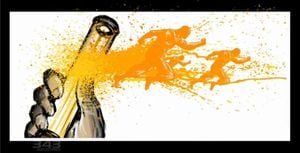 Rumbledrug is the informal name used to describe a drug or cocktail of drugs used to vastly increase a subject's physical strength and resistance to injury.[1]

Rumbledrugs became notorious for their use during the Insurrection, most notably on Hellas and Fumirole. On both worlds, they were used by rebels in a vainglorious attempt to fight SPARTAN-IIs. Unencumbered by the body's normal safety limits, subjects were capable of feats of enormous strength, but the subsequent lack of control and mental instability together with the immediate physiological damage meant that users often died long before they ever laid hands on an actual Spartan, but not before doing tremendous damage to themselves and anything that got in their way.

During the events aboard the UNSC The Heart of Midlothian the ship's AI Mo Ye instructed ODST Sergeant Michael Baird to take a type of Rumbledrug, known formally as a Waverly-class augmentor. The augmentor was a cocktail containing a derivative of phenylcyclohexylpiperidine, an artificial slow-release synthetic adrenalin and a rapid coagulant. She also had him take a beta-blocker to keep him focused. Mo Ye, who at the time was unable to harm human beings, was only able to tell Baird about the drugs because he had already suffered fatal injuries, thus meaning the drugs were working to extend his life, rather than shortening it.

Based on its description, it is likely that Lieutenant Badia Campbell utilized a Rumbledrug when she turned on the bridge crew of the UNSC Midsummer Night in 2535.[2]