This article is about the 343 Industries internal game pitch. For space fighter craft in the Halo universe, see space fighter. 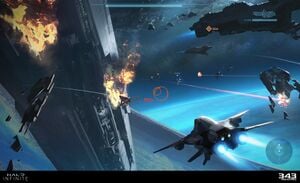 "This was a fun one. This is a mock up image of what a space fighting game would look like. A lot of the inspiration came from the Sabre Mission in Reach and how cool it would be to have that be a full game. Very early on during the development, we formed groups and had a week to make a playable prototypes of some of the things we would like to see in Halo. Can't remember everyone that participated but some were Ryan Roth, Brian May, David Heidhoff."
— Josh Kao discussing the prototype.[1]

Halo: Starfighter[2] was an internal pitch developed by a team within 343 Industries early during the development timeframe of Halo Infinite (c.2015-2018). During this period, multiple teams were formed within 343 to spend a week making playable prototypes of potential fun ideas to take Halo gameplay in the future. The prototype was intended to take the concepts behind the Sabre space fighter combat section in the Halo: Reach campaign level Long Night of Solace and expand upon them into a full game. Released concept art showcases a space battle between F-41 Broadswords and Is'belox-pattern Banshees with Phoenix-class colony ships in the background.[1]

The unveiling of this pitch by concept artist Josh Kao provides additional context to a poster showcased in a 343 Industries recruitment advertisement in June 2018.[3] The poster, partially-obscured, showcases a part of the word "Star" alongside what appears to be a UNSC pilot helmet overlaid on a Misriah Armory logo.

The Starfighter project was worked on by a number of 343 Industries staff including (though not limited to) Josh Kao, Ryan Roth, Brian May, Kevin Schmitt[4] and David Heidhoff,[1] alongside writer Jeff Easterling, who wrote some lore for the project.[4][5][6]

When initially uploaded to ArtStation, Josh Kao named his post "Halo: Last Star Fighter" in reference to the 1984 film The Last Starfighter,[1] before later updating the post name to the project's proper title.[7]