A pilot is a person who can operate and maneuver an airborne or space-borne vehicle. 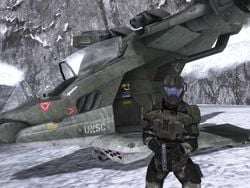 A UNSC pilot next to a Hornet.

There are pilots in all main branches of the UNSC Armed Forces: the Air Force, Navy, the Marine Corps, and Spartan Operations. Large crews of Navy crewmen operate and maintain UNSC starships; the command and control of the vessel is carried out from the bridge. Many UNSC aerospace craft can all be operated by just one pilot, as can Bumblebee lifepods. During the Human-Covenant War, human pilots typically had significant tactical advantages and often outnumbered their Covenant equivalents in early engagements, though were often moot against the technological superiority of Covenant fighters such as the Seraph.[1]

UNSC Air Force pilots wear fatigues with teal-toned camouflage and white chest armor. The suit lacks the additional armor plating worn by most Army troopers or Marines on the knees and shoulders due to space constraints in their vehicles' cockpits. On missions in a vacuum, the suit can be sealed off and an enclosed standard combat helmet is worn with it.[2][Note 1] Additionally, a type of helmet has been specifically developed for UNSC Air Force pilots. This helmet is presumably used in normal missions while the combat helmet is worn on operations where direct combat, such as boarding action, is expected.

While only select UNSC personnel operate space-borne and airborne craft, all marines of the UNSC Marine Corps are seen to demonstrate prowess in operating all UNSC ground vehicles - Scorpions, Warthogs, and Mongooses, and even the Covenant Karo'etba-pattern Ghost as well. ODSTs also operate their own Single Occupant Exoatmospheric Insertion Vehicles.

In late 2552, Marine dropship and Falcon pilots wore ballistic helmets with a golden visor and an Integrated Helmet and Display Sight System for remote-control of on-board weaponry.[3][4] The rest of the outfit is the same as that of the Marine infantrymen. In November 2552, Marine pilots were seen wearing the same body armor as that of a Marine but with a sealed helmet with a blue visor reminiscent of a modern fighter pilot's helmet. The chest armor is also equipped with an additional control panel.

More modern craft such as the F-41 Broadsword feature full cyberlink interfaces for augmented pilots, inertial compensators to negate the effects of high-G maneuvers and targeting fotware compatible with VISR interfaces.[5] MJOLNIR Powered Assault Armor has seen several different pilot-centric armour configurations, with the Mark V and GEN2 platform hosting a compatible version of the air force pilot helmet. Then GEN2 platform has seen a larger variety of suits intended for pilot use, with the AVIATOR designed for compatibility with a wide range of UNSC aerospace craft. Other variants include FOEHAMMER, which induces full-body paralysis similar to that observed by Covenant Seraph pilots, ICARUS, VALKYRIE and VECTOR. The STINGER variant was also designed for in-built compatibility with the AV-49 Wasp. 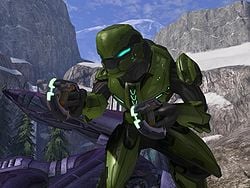 The Sangheili Flight harness is optimized for combat pilots.

As an enormous spacefaring empire, the Covenant hosts a large number of client species capable of piloting crafts. Groups of Jiralhanae or Sangheili can operate a spaceborne Covenant ship, such as the Ket-pattern battlecruiser or the Varric-pattern heavy cruiser, by operation of holographic consoles at the control bridge of the warship. As with all Covenant technology, the Huragok assist in the technical maintenance of warship systems.

A single Jiralhanae or Sangheili can pilot a single person attack fighter as well as Phantom and Spirit dropships, with the pilots of the Seraph fighters drawn from the ranks of the Obedientaries.[1] To Sangheili, strikecraft such as the Seraph were considered war chariots used to attain personal glory, with any military purpose considered secondary. These Sangheili, hope to accumulate enough acclaim to be allowed to serve on the ground, with the vehicles themselves not worthy of recognition, simply tools to be expended in battle. Sangheili pilot training emphasises cooperation and mutual support, though Sangheili pilots have the tendency to split off and hunt individual targets without assistance.[1] In battle, Seraph pilots were organised into Talons of eight or more pilots. Each Talon was then split into hunting pairs while on a mission.[1]

On the other hand, Jiralhanae pilots have a different relationship with their machines, with pilots jealously guarding those they had claimed and giving them secret names. Clan sigils and Forerunner glyphs are hand-carved into the hulls to signify battle honours and damage scars, and the pilots of each ship formed close-knit packs that ate, fought and died together. Brute pilots were not afforded the training given to their Elite conterparts, but their human pilots soon learned to fear them the most.[1] Though uncommon, Unggoy are also known to be able to pilot Banshees, albeit clumsily.[6]

Covenant strikecraft pilots connect to their flight systems using direct neural interfaces, which employ very minimal safety cutouts or filters. The pilot's body is rendered immobile to prevent self-injury and agony is inflicted in exchange for superior control of the ship. The Sangheili enter battle-meditation before completing the machine link protocols to control the pain, while Jiralhanae pilots embrace the interface burn to trigger their own focus.[1] In addition, the Sangheili-developed Flight harness also features a hyper-wave link for cleaner craft interactions and a mouth piece that retains a multi-port for use with older Keljiric-pattern Tarasques and N'weo-pattern Gigass. The more compact deltoid armor has less of an impact on the elite's range of motion in the cramped compartments of subluminal space craft and reduces overall fatigue in multi-phase interdiction missions. The less cumbersome cage utilizes aligned composites to postpone the onset of fatigue and the explicit primary environment multi-port is less restrictive than older helmet multi-port.[7]

Sangheili often disliked piloting of dropships such as the Spirit, preferring to leave the task to Kig-Yar and Unggoy instead.[8]