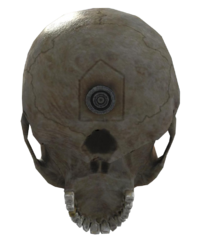 The neural interface on the back of a human skull.

The neural interface, commonly known as a neural implant[1] or neural lace,[2] is a type of technology used by both UNSC[3] and Covenant.[4]

The basic function of the standard neural interface is to act as a "friend or foe" indicator, so that radar signatures will pick up the owner's signature and identify it as friendly. This way, the wearer appears as a "yellow" blip on the motion tracker of another soldier's heads-up display and friendly fire is less likely.[3] Additionally, the implant can be used to track and home in on its wearer in the event of capture by enemy forces, for example. While normally detectable under layers of rubble or rock, the signal is no longer reliable several meters underground.[5] More advanced models issued to key personnel possess a number of additional functions, including connections to data networks, enabling the wearer to coordinate with other command personnel as well as AIs and securely access sensitive data.[6] War Games training simulators employ the participants' neural interfaces to provide them with simulated sensory input to make the training scenarios more authentic.[7]

Expensive and requiring complicated surgery when first introduced, neural interfaces and their mediating computing systems could be fitted in a simple outpatient clinical procedure by 2557. High-bandwidth interfaces can be paired with advanced expert systems to augment – and even bypass – the human motor system, reducing the physiological stress of high-performance combat exoskeletons to levels that do not require extensive skeletal reinforcement. This innovation, initially a secondary line of research during MJOLNIR’s early days, was crucial for the SPARTAN-III and SPARTAN-IV programs.[9][Note 2]

Covenant strikecraft pilots connect to their flight systems using direct neural interfaces, which employ very minimal safety cutouts or filters. The pilot's body is rendered immobile to prevent self-injury and agony is inflicted in exchange for superior control of the ship. The Sangheili enter battle-meditation before completing the machine link protocols to control the pain, while Jiralhanae pilots embrace the interface burn to trigger their own focus.[4] In addition, the Sangheili-developed Flight harness also features a hyper-wave link for cleaner craft interactions and a mouth piece that retains a multi-port for use with older Keljiric-pattern Tarasques and N'weo-pattern Gigass. The more compact deltoid armor has less of an impact on the elite's range of motion in the cramped compartments of subluminal space craft and reduces overall fatigue in multi-phase interdiction missions. The less cumbersome cage utilizes aligned composites to postpone the onset of fatigue and the explicit primary environment multi-port is less restrictive than older helmet multi-port.[11]