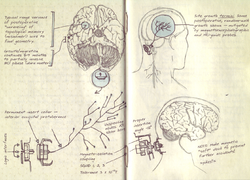 Diagrams of the SPARTAN neural interface as drawn by Dr. Halsey.

In addition to the standard functions of a neural interface, the SPARTAN neural interface is unique in that it is designed to allow an AI construct to directly interface with the Spartan's brain. Therefore, the AI resides in both the armor and the wearer's mind; essentially, it exists in both places at once. The interface allows the AI access to most of the suit's internal systems, though the Spartan has override control. The AI is capable of significantly improving the data transfer rate between the motor cortex of the Spartan and the MJOLNIR's processing unit, further improving the Spartan's already lightning-quick reaction speed. The Smart AI Black Box interfaced with Naomi-010 during their assault on the Piety, utilizing the connection to experience the world around them as the Spartan did, while simultaneously maintaining his own, objective perception via the Mjolnir's helmet cam.

The AI's data crystal chip is inserted into a socket near the base of the Spartan's skull through a slot in the MJOLNIR armor.

Victor-101 of Black Team was equipped with the upgrade at some point before the Battle of Line Installation 1-4,[1] though it was most notably issued to John-117 upon his reception of the Mark V MJOLNIR armor during the Fall of Reach in August 2552 in order to allow him to mentally interface with the smart AI Cortana.[2]

At least a few other Spartans followed suit as Naomi-010 was equipped with a Spartan neural interface by February 2553[3] and Frederic-104 had one implanted by July of that year.[4] However, this was likely done in Naomi's case due to her work with Black Box as part of Kilo-Five. In Fred's case, it was in preparation for him to work with the dumb AI Damon, something that he was less than thrilled to be ordered to do due to Fred's bad experiences with Intrepid Eye.[5]

The interface is also a standard addition to the Spartan-IVs' augmentations.[6]