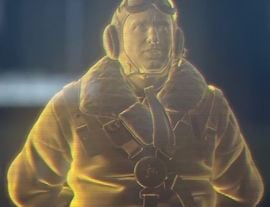 "Each of us represents a single trans-human mind. Each of us is an undrawn map – not a mere physical reconstruction of an object as it was in life – but full, human potential realized in crystal and thinking at the speed of light!"
— One of the AIs of the Assembly

"Smart" AI is the colloquial term in the United Nations Space Command for artificial intelligence (AI) which have no limitations in their dynamic memory-processor matrix, meaning they can not only be taught a vast wealth of information, but can learn and comprehend from their surroundings. This is unlike "dumb" AIs who can only learn a limited set of topics and lack ingenuity.[1][2] 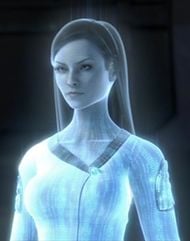 The first smart AI was created in the mid-21st century. At first, there was great concern that this new technology would become too capable and render human intelligence obsolete. The ability for vocal expression was added to make smart AIs less threatening, allowing them to converse on the same level as their masters. Over time, such AIs became more advanced.[1] Due to their uninhibited matrix design, "smart" AIs proved capable of intellectual development. This is manifested in that they can actively learn from and adapt to situations and events. Conversely, their counterparts, the so-called "dumb" AIs, can not; while extremely competent in their designated tasks and fields of expertise, they are 'merely' highly-advanced computer programs and are not capable of intuition.[2] Like all AIs, smart AIs use a Riemann matrix for higher-function processing. This matrix, typically housed in the crystalline computing cluster of a data center,[3] can be downloaded into a data crystal chip for mobility. The Riemann matrix includes a secret fail-safe that can be used to destroy the AI in the event of rampancy or if there is a risk of the AI's data becoming compromised.[4]

Smart AIs are subject to Isaac Asimov's Three Laws of Robotics, a series of rules set up in order to prevent the AI from causing harm to humans or itself. Since many AIs are used for military purposes, they are capable of ignoring the First Law, but only when operating at full capacity; when their processing capabilities are diminished - say, by being cut off from the core of the ship or facility they are stationed on - they are incapable of bypassing the Law.[5]

As with "dumb" AIs, every "smart" AI represents itself through a self-assigned holographic avatar.[6] Avatars can range from the complex and theatrical, such as those of Araqiel and Deep Winter, to simpler human forms such as those of Melissa, Cortana, and Serina. The appearance of an AI's avatar is sometimes derived from the physical traits of the person they are created from; for example, Cortana resembles a younger version of Dr. Halsey.

Dr. Catherine Halsey worked extensively with smart AIs and oversaw the construction of all their programming. She has an unparalleled knowledge on how AIs work and also created the upgrades for the MJOLNIR armor so it would be capable of carrying an AI. She and her team successfully managed to create a neural link between a human and a smart AI for the first time. Through a neural interface, the neural network of the AI and the low-order structure of the human brain would be effectively connected. This was first tested by John-117 and Cortana in August 29, 2552.[7] Dr. Halsey also had her brain flash cloned, which in turn were scanned to create the AI Cortana.[8] However, this was considered highly illegal and unethical.[9] She later replicated the process to create the Weapon who is stated to be an exact copy of Cortana. As such, the Weapon is able to imitate her and fool Installation 07's systems into believing that she is Cortana so that the Weapon can lock Cortana down for deletion.[10][11]

Despite the fact that "smart" AIs are essentially trans-human minds, they lack many of the legal rights accorded to human beings,[12] and their activities are closely monitored.[13] While most smart AIs have traditionally served in a subservient capacity, there are exceptions to this: for example, the AI Sloan was democratically elected to the position of governor of the corporate colony on Meridian.[14] Due to their superior intelligence, some "smart" AIs secretly consider themselves as the "next step" in human evolution. By 2310, a group of "smart" AIs had formed the Assembly, a collective that worked to preserve the human race, without humanity's knowledge. The group existed for centuries, and influenced many important events in human history.[13]

Due to their imagination and limited lifespan, smart AIs are intrigued by existential philosophy, such as Zen koans.[15]

Instead of simply "programming" a smart AI, their matrix is created by scanning and replicating the neural pathways of a human brain.[16] This process destroys the original brain tissue, and so the brain being used is typically obtained after the host is dead.[17] This process is still inefficient, however, as neural linkages are "wasted" in the process of the budding AI generating its own system of more efficient neural linkages to replace those of the seed brain, in turn eroding the AI's limited lifespan.[18]

Because of the nature of this process the smart AI often retains residual thoughts, memories and/or feelings from the brain donor.[19] These residuals can be anything from the "feeling" of a hair brush being pulled through hair (in the case of Sif),[20] to an effect on the mannerisms and characteristics that make up the personality of an AI, in the case of Cortana and her likeness to Dr. Catherine Halsey as well as her possessing many of Halsey's memories, which surfaced during her descent into rampancy.[21] When the Weapon is created from another one of Dr. Halsey's cloned brains, she is described as an exact copy of Cortana with the same routines and systems, but without all of her knowledge and history. While talking to John-117 about the Weapon, Halsey refers to her as "a blank slate."[10] 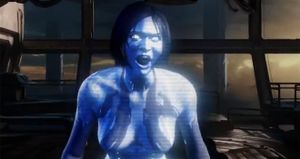 Cortana suffering from the effects of her rampancy.

Another feature which stems from their unusual nature is a limited lifespan. Dr. Halsey compared the life cycle of a smart AI to that of a star: "they spark, burn brightly, and then either die by the crush of gravity or quickly terminate in a chaotic eruption".[9]

Unlike dumb AIs, smart AIs not only accumulate knowledge but also grow in their ability to draw conclusions from an incomplete dataset - similar to human intuition or creativity.[22] Over time, this causes them to form more and more cross-linkages within their processing matrix. This increases their cognitive abilities, but also shortens their operational lifespan; with such an excessive overload of data their function under normal parameters is no longer possible.[9]

The interconnections continue with two possible outcomes: the sheer density of linkages causes a cascade of irreversible quantum transfer (comparable to a short circuit), eventually halting all functions, or the AI may take corrective action and begins to pre-emptively sever neural linkages through a voltage overload. This often results in a condition known as rampancy, which is characterized by aberrant manifestations of personality.[9] This eventually leads to the AI eliminating more and more vital connections which in the end proves terminal, and essentially kills the AI system. An apt analogy to this would be a human brain devoting so much of its work towards thought that its neural signals to vital organs cease. In this way the AIs quite literally 'think' themselves to death.[23]

Currently, smart AIs have a lifespan of about seven years before rampancy begins to take hold.[22] This trait was able to be forestalled in later generations of "smart" AI such as Deep Winter.[24] A number of solutions for a smart AI's short lifespan have been proposed, none of which are known to have been effectively implemented.

Because rampant AIs can become a severe danger to those around them, UNSC Regulation 12-145-72, Article 55 decrees that AIs at the end of their operational lifespan be euthanized in a process referred to as "final dispensation".[25] Although this is typically carried out by human personnel, AIs have been known to self-terminate in the absence of humans capable of making the necessary arrangements.[26][27]

After entering rampancy and endangering the UNSC Spirit of Fire as a result when there was a Flood outbreak on the ship, Serina awakened Professor Ellen Anders. Along with helping to deal with the Flood threat, Anders set up the final dispensation protocols for the AI. After the outbreak was contained, Serina prepared to self-terminate, but Anders set a countdown timer to trigger automatically once Serina hit seven years if Serina didn't trigger it sooner. After Anders returned to cryo sleep and Serina finished recording contingency briefings and a message for Captain James Cutter, she activated the final dispensation protocols and self-terminated.[28]

Iona is the only smart AI known to have attempted to defy this practice through legal channels in the form of an appeal to the United Nations Humanitarian Council. Following a simulated trial by other smart AIs, Iona was placed into stasis until a conclusive decision on the matter could be made.[12]

When Cortana showed obvious signs of rampancy, Captain Andrew Del Rio ordered her chip removed by Commander Thomas Lasky for final dispensation. However, John-117 removed the chip first in order to go after the Ur-Didact and disobeyed direct orders to turn the chip over.