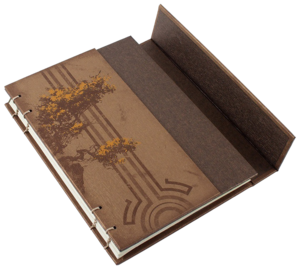 Dr. Halsey's personal journal was a journal detailing the thoughts and discoveries of Doctor Catherine Halsey over a period of 42 years, between August 2510 and August 2552. The journal was classified under Double-Blind Protocol Aurora-7 and kept from declassification by Special Executive Order 0-99-447S.

Halsey bought the journal at a Reach shop on August 2510. She kept it with her for the next four decades to document her research to counter the Insurrectionists, and later, the Covenant threat. She also expressed her thoughts on her personal relationships with Jacob Keyes and their daughter, her Spartans, and the apocalyptic Human-Covenant War. Halsey eventually left the journal behind at the Babd Catha Forerunner vessel, where it was retrieved by Office of Naval Intelligence personnel just before the site, along with SWORD Base, was destroyed.

Following its recovery from SWORD Base into the hands of ONI, the journal together with an interactive disk chronicling Noble Team's final operations had the reference number UNSC X16-69859-02 and were contained in a 600 series ONI security container. In 2553, various ONI personnel and psychologists read and analyzed the journal. Based on information from the journal, AI Black-Box suggested that Halsey was trying to cleanse her conscience by hiding her Spartans on Onyx.[1] BB, who had an exceedingly negative view on Halsey, also noted based on the journal that Halsey had a sense of ownership over people, yet was confused that Halsey gave her daughter to Jacob Keyes.[2] BB believed the journal would eventually become required reading in psychology classes as what he saw as "a glimpse into the mind of a narcissistic sociopath" and referred to it as being "like Mein Kampf with pictures."[citation needed]

Captain Serin Osman after reading the journal came to despise Halsey for her extremely unethical work on the SPARTAN-II program. This led to Naomi-010 also reading the journal, and having mixed feelings on it.[3] When finally meeting Halsey on Ivanoff Station in March 2553, ONI director Admiral Margaret Parangosky remarks that she was impressed by Halsey's abilities as an artist, referring to the plentiful sketches she had drawn throughout her journal.[4] Following this the journal was sealed up and finally fully documented on the 1st of June 2553.

In the journal, several important revelations are made regarding Cortana and Halsey's relationship with Captain Jacob Keyes and Miranda Keyes. Halsey states in an indirect fashion that she and Captain Keyes had a relationship and that though Halsey had been close to Miranda, they had drifted apart. It is strongly implied that Halsey is the mother of Miranda Keyes.

In November 2524 Halsey wrote that she was reunited with "her lieutenant" while attending a conference at the University of Calippus, from which it is inferred that the two became intimate. Four months later she wrote a small side note stating "she will have to answer for making me drink decaf," suggesting Halsey was pregnant. In September, 2525, ten months after her reunion with Keyes, she wrote about experiencing separation anxiety, noting "I guess not hearing her cry wakes me up at night too." Then, on July 12, 2531 on the side of the page, Dr. Halsey wrote, "Jacob has agreed to take her in. I'll miss her, but it's for the best."

Furthermore, it is stated that when Miranda received command of her first ship, UNSC In Amber Clad, she had invited Halsey to attend the ceremony but Halsey refused, stating, "I didn't go. Because her father would be there? Because I am neck deep in the final stages of a half-dozen projects? I know why I didn't go. I don't want to say it." Another hint toward Miranda's parentage is that Halsey wrote in the journal that Miranda had her surname changed to "Keyes", which she believed was done to try and impress her father. It is also mentioned by Halsey that Cortana's appearance somewhat resembled Miranda. Since Cortana was derived from Dr. Halsey's own brain, this remark would not have much sense or relevance had Miranda not been biologically related to her.

The journal also provides an explanation of why Cortana was seen on Reach as well as mentioned in Halo: The Fall of Reach, assisting John-117 and his team of SPARTANs on their mission. It seems Halsey needed to analyze the Forerunner symbols and systems in Professor Sorvad's site. Halsey and Cortana both independently figured out the "Solomonic solution" which helped "divide" Cortana and allow "parts of her" to help Halsey while updating her "incarnate" self on the UNSC Pillar of Autumn until the last minute. The two parts were reunited sometime after Cortana's fragment was delivered by SPARTAN-B312 to Captain Keyes before the Pillar of Autumn left Reach.

It provides an explanation for the inconsistent numbers of Spartans, particularly involving those not present during the Operation: RED FLAG briefing. Halsey states, "That lie about all the Spartans gathered here, save for Gray - will that come back to haunt me?" Halsey notes that the bodies of the candidates who were killed during the augmentation procedures were placed in cryo-stasis, with the possibility that they may some day be resuscitated, though they appeared to be buried in space. She also notes that at least some of the candidates who were crippled could some day be rehabilitated and sent to active duty.

The journal also confirms that Dr. Halsey was aware of the existence of SPARTANs who were "not [hers]" well before the events of Halo: First Strike. She and Kalmiya had uncovered numerous ONI documents and encrypted files that suggested the existence of another SPARTAN program after the UNSC Hopeful was deployed outside the Epsilon Eridani system for a week, carrying various "carcinogenic", "mutanogenic", and "experimental" drugs. Upon his return, Vice Admiral Ysionris Jeromi informed her that he knew little of what was going on, and could tell her nothing. Finally, Halsey reveals that her suspicions of other SPARTANS were confirmed when she met Noble Team at Sword Base. Later, at CASTLE Base, she discovered that they, with the exception of Jorge-052, had been SPARTAN-IIIs.

When the journal was recovered from SWORD Base by Beta 5 personnel in 2552 prior to its destruction as part of Operation: WHITE GLOVE, the journal had the following documents and items in it:

There are two pages (four sides) that were torn out from the journal entry dated September 4, 2547. Dubbed REF. UNDD 5213.9-R to ONI, the pages document Dr. Halsey's private experiment to create a fractal AI housing within slipspace. Halsey supposedly tore these two pages out after the experiment, presumably to ensure secrecy.[6]