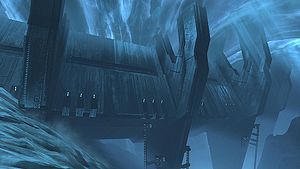 A section of the ship visible within the ice caverns

"Commander, you're wondering what your Spartans died for? They died for this."
— Dr. Catherine Halsey to Carter-A259

This ship of Forerunner design was embedded within the Babd Catha Ice Shelf on Reach circa 97,445 BCE, with debris from its crash spread out across the Eposz region.[1] Positioned at a tilted angle, the vessel appeared to be roughly disk-shaped, though its true size was concealed by the glacier in which it was embedded. Parts of the ship were visible in an ice cavern underneath SWORD Base, as well as a nearby mountain range. The interior of the ship housed a holographic data terminal.[2][3]

The ice cavern housing most of the vessel was home to one of Dr. Catherine Halsey's labs and had evidently been under excavation by the Office of Naval Intelligence for some time.[2] By summer 2552, ONI had marked a number of artifact sites that seemed to form a trail leading from CASTLE Base, the site of the Menachite Forerunner complex, to the immediate region of SWORD Base, suggesting that the ship was outbound along this trajectory when it crashed.[4]

According to Dr. Halsey, the ship held secrets that could turn the tide of the Human-Covenant War — a "latchkey" discovery that Halsey compared to the inventions of the conical bullet and the Shaw-Fujikawa Translight Engine. However, when the Covenant began attacking the facility on August 29, 2552, the decryption was only partially complete. Using Wolf Spider turrets, the Spartan-IIIs of NOBLE Team were able to hold off the Covenant long enough for Halsey to finish the decryption. The ship, along with SWORD Base, was completely destroyed by an explosive charge.[2]

Through Cortana, Dr. Halsey was able to retrieve navigation data from the Forerunner ship; this data contributed to the discovery of Halo Installation 04.[5][6] After the Human-Covenant War, the Starfire VISR was developed to decrypt the data extracted from the ship, but it would take decades before even a fraction of the site's archived secrets were decrypted.[7]