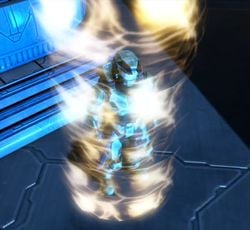 Slipspace translocation,[1] more commonly known as teleportation, is a method of travel that allows the user to travel nearly instantaneously between locations. This is achieved through the use of slipspace as a travel medium, without the use of a conventional slipspace drive. The Forerunners were the first known civilization to make extensive use of teleportation technology. Later on, this technology was reverse-engineered by the Covenant. Following the Human-Covenant War, the United Nations Space Command began to experiment with translocation as well.[2]

There are several known variations of slipspace translocation technology. In its most commonly encountered form, slipspace translocation does not actually "teleport" its users by dematerializing them and re-building them in another location; rather, it encases them in a compressed slipstream field, transporting them from one position to another almost instantaneously. This happens much in the same way that a spaceship uses slipspace to travel between star systems - time passes for the individual, but due to the short distances involved it is negligible.[1] The uncertainty errors involved in translocation and the shift between dimensions can cause sensations of being put back together again "from a million pieces" after a transition.[3] In addition, the process typically causes feelings of nausea and disorientation on humans.[4]

In some cases of Forerunner translocation, the individual being teleported is indeed disassembled, transported and reassembled at a different location; a Forerunner artifact recovered by the UNSC from Requiem was known to do this.[5]

The effect left behind from an individual's translocation

One of the most basic forms of translocation system is the teleporter, a device that allows transit between two fixed points. The Forerunners used several types of teleporters as a form of transport on their various installations, including the Halo Array and the shield worlds.[6] These teleportation devices vary widely in design; the shield world Requiem featured a static array of slipspace portals that would pop out of the ground upon activation, whereas some older Forerunner structures (such as a stone building in Ontom, Sanghelios) included portals that were completely invisible until traveled through.

Many Forerunner facilities are also equipped with teleportation grids, which enable transportation across the installation without the use of teleporters,[7] instead using a network of "telemetry clusters" placed throughout the installation to keep the grid operational.[8] Forerunner warriors also employed teleportation systems when deploying to the battlefield.[9] Promethean Knights are capable of translocating over short distances.[10]

The Forerunners also built slipspace portals, a large-scale application of translocation technology. Portals allow transporting enormous amounts of mass—ranging from spacecraft to megastructures, such as the Halos—between two fixed points, across interstellar distances.[11]

A Forerunner artifact recovered from Requiem was capable of translocating individuals who interacted with it; Dr. Henry Glassman of the UNSC Infinity was teleported from the Infinity to the inside of Requiem after touching the device.[5] Some time later, SPARTAN-IV Gabriel Thorne was also translocated by the artifact, being teleported to The Cauldron.[12]

The Covenant also managed to reverse-engineer Forerunner translocation technology to a limited degree, using it in their spire battlefield installations, which contain a teleportation system linked to a nearby capital ship, used to transport dropships or other vehicles to the ground.[13] The anti-gravity chairs used by the Hierarchs are known to possess short-range teleportation devices as a form of defensive measure.[14]

The UNSC has begun experimenting with its own slipspace translocation technology, based on reverse-engineering Forerunner technology by ONI, with the MX-1050 Quantum Plane Translocation Marker-Local/Hybrid deployed to transport assets immediately from hostile environments to a receiver node elsewhere. Currently, using the device on organic matter is forbidden due to safety concerns.[2]

In most of the Halo games, the effects associated with teleportation involve an intense yellow-orange glow and similarly colored rings that surround the object being teleported. In Halo: Reach, the glow is more subdued and blue-purple in color and closely follows the shape of the teleported object.