"I suspect we are forcing the Humans into a tighter arena than they care to fight in—soon we may be able to use the Sharquoi."
— A cryptic mention of the Sharquoi shortly before the Battle for Earth[3]

The Sharquoi are a race of powerful creatures that were biomechanically altered by the Forerunners to fight the Flood. While the Sharquoi are little more than animals on their own, the Forerunners implanted them with devices enabling them to be mentally controlled en masse by a single individual via the vertex, a central neural interface. Left in stasis following the Forerunner-Flood war, a number of Sharquoi were later found by the Covenant, but were rarely used in combat as the Covenant lacked effective means of controlling them.[1] After recovering the vertex from Installation 00, the Jiralhanae Chieftain Hekabe intended to use hundreds of thousands of the creatures in his own plot to gain power. Though he nearly succeeded, Hekabe's plan was foiled by Spartan-II Gray Team, the Surakan Militia Volunteers and Rojka 'Kasaan who destroyed the hive and all of the creatures within using a HAVOK tactical nuclear weapon.[4]

While evidently of natural origin, the Sharquoi were modified by the Forerunners to serve as shock troops against the Flood as they were found to have a curious resiliency against the parasite.[5] Control collars were used to control the Sharquoi like a hive of insects via a neural control device known as the vertex.[6]

Sometime after the Writ of Union the Covenant discovered the Sharquoi and inducted a limited number of them for combat, but largely kept their existence a mystery to the average Covenant citizen.[7] Near the end of the Human-Covenant War, a Sangheili expressed to his commander that humanity's corralling following the Fall of Reach might allow the Sharquoi to be deployed soon.[3] The San'Shyuum had intended to use the Sharqoui during the Battle for Earth, but never got the chance to deploy them.[1]

While many former Covenant members believed the Sharquoi's status after the war was unknown[8] at least two hives had remained untouched by the Covenant. A former Sangheili Shipmaster seeking asylum provided useful intel of the Sharquoi to the UNSC by replicating Covenant murals for them in hand-drawn sketches. Later the UNSC and the Sangheili crew of an ex-Covenant destroyer were able to locate on a remote world the Sharquoi hive once controlled by the Prophets. During the mission ONI personnel accidentally released a single Sharquoi that resulted in the deaths of 50 out of the 100 ODSTs that had been deployed. The hive was subsequently razed with nuclear weapons and then glassed by the destroyer to ensure that none of the Sharquoi would ever again pose a threat.[6]

During the Battle of Installation 00 in late 2552, the Jiralhanae Chieftain Hekabe had managed to find the vertex using the distraction of the arrival of High Charity and the spread of the Flood. However, it took Hekabe six years to understand the writings that came with the device and use it to locate the Sharquoi hive on Carrow which had hundreds of thousands of the creatures. By using the Sharquoi on Carrow against the Surakan Militia Volunteers and the Sangheili, Hekabe planned rule over that world and then eventually others as well. Hekabe was able to take advantage of Thars 'Sarov calling him in for help to excavate the Forerunner structure and awaken thousands of Sharquoi under his control through the vertex. After his ships were destroyed, Hekabe captured human freighters that were not slipspace-capable and used them to capture Thars' grounded ships to use the Sharquoi to attack the worlds of his enemies.

In a desperate attempt to stop Hekabe, Governor Ellis Gass, Fleetmaster Rojka 'Kasaan and SPARTAN-II Gray Team launched an attack on Hekabe with a makeshift EMP canon created out of a repurposed M68 Gauss cannon and the core of a HAVOK tactical nuclear weapon. Hekabe was defeated and Ellis took the vertex for herself, having the Sharquoi kill Hekabe. To keep her people safe, Ellis used her control of the Sharquoi to draw them back into their hive while directing the Sharquoi aboard Sangheili vessels to crash them to end the threat they posed. Once the vertex realized what Ellis was up to, it fought back and she lost control of the Sharquoi, but not before she successfully returned the surviving Sharquoi to their hive. Ellis then detonated the HAVOK, destroying the Sharquoi hive and killing the hundreds of thousands of creatures inside. Later scanning by the UNSC frigate UNSC Welcome to the Snipehunt confirmed the destruction of the hive and all of the Sharquoi within. However, the UNSC planned to keep an eye on the desert in case any of the Sharquoi had managed to escape before the HAVOK was detonated.[4]

Sharquoi are a large cyclopsian species. At five meters tall they are even larger than Jiralhanae and Mgalekgolo, and are considered more dangerous than either of the two.[1] Sharquoi have small heads for their body size, and are not very intelligent when they are not connected to their technologically-enabled hive mind.[6] They have trunk-like legs and hands bigger than a Jiralhanae's head. Above each of the hands are large bone spikes at least a meter in length. Sharquoi are covered in grey, leathery skin over heavily bunched and corded, muscles. In place of an eye the Sharquoi have light-grey bony tissue used for echolocation. They have razor-like teeth that jut over their jaws.[7] Sharquoi blood is purple.[9] Sharquoi are strong enough to rip Sangheili and Jiralhanae limb from limb,[10] incapacitate a Spartan-II in MJOLNIR Mark V, flip M12 Warthogs into the air,[11] and destroy M400 Kodiaks with their bare hands.[12] Sharquoi are also incredibly durable, capable of taking a 14.5×114mm round to the head, or a M19 missile to the chest, without dying.[11] However, they are susceptible to continuous fire from heavy weapons, multiple headshots from a SRS99-S5 AM sniper rifle, and decapitation from a Type-1 energy sword.[1]

Sharquoi are mutated humans that serve the Covenant.[13] 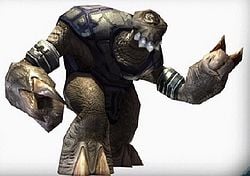 A render of the Sharquoi

The Drinol, as it was originally known[15] was planned to be in the third-person shooter version of Halo prior to Bungie's migration to the Xbox market.[16] The Drinol was essentially a recreation of the Drinniol from Marathon, an enemy unit referred by the eponymous ship's crew as Hulks. The Drinol was a close match to the Drinniol in both appearance and combat role. Though modeled and animated during the development of Halo, the Drinol was cut from the game.[17] It was later planned to be included in Halo 2 as the Sharquoi, but was eventually removed from the game once again.

The Sharquoi are mentioned briefly in Conversations from the Universe, a pamphlet included with the Halo 2 Limited Edition. This remained as the sole reference to the Sharquoi in Halo canon until the 2017 novel Halo: Envoy, which elaborates on the creatures' nature. The novel even makes clear references to the early placeholder and concept art for the creatures (seen below), including a mural featured in the early cinematic cutscenes for Halo 2.[1]