"Gotta give her credit for her shout-out to the Yonhet, though. I mean, nobody remembers those guys."
— Edward Buck on the Yonhet.[5]

The Yonhet are a humanoid sapient species associated with the Covenant. They are part of what is commonly known as the Covenant fringe, a collection of various species that used to serve the Covenant's interests in various peripheral roles. Named after their home moon of Yonhe, they are known as traders and smugglers.[4]

When the Yonhet first came into contact with the Covenant, they were viewed as militarily insignificant. With a relatively small population, there was little value in drafting the Yonhet as full signatories to the Covenant Empire. However, their skills at acquiring a large variety of items that were considered difficult to locate gave them flexibility and a high degree of tolerance within the Covenant. The Covenant did not doubt the Yonhet's loyalty due to their devout acceptance of the "Great Journey", although there was an element of cynicism to their adherence to the Covenant faith.[4]

The Yonhet were added to the Covenant fringe, a collection of species that provided various strategic and infrastructure-related advantages to the Covenant, but were militarily and politically insignificant. Many Yonhet remained in hiding during the Human-Covenant War, both because they felt it was a fight that was not theirs, and the growing scale of the conflict had made exploration and trade much too dangerous and difficult for them.[4]

With the Covenant's demise as the end of the war, the Yonhet began to emerge in hopes that the coast was clear enough to make a profit from the fleeting peacetime and political uncertainty. Taking advantage of the chaos and confusion of the Treaty period, fledgling warlords of Covenant remnants turned to the Yonhet to take advantage of their natural skills, giving some Yonhet individuals trusted roles. Others were not as fortunate as some avaricious warlords instead oppressed and enslaved them.[4] Some Yonhet were sold into slavery by Kig-Yar.[6]

While Yonhet appeared to be humanoid species, they were among the more unapproachable and misunderstood. Male Yonhet are hairless with milky-pale skin, deep-set eyes with sagging skin beneath, and drooping mouths lined with short, sharp teeth. Their foreheads are wrinkled in deep folds, although their cheek and brow bones are sharp and prominent. Their heads sport strange pocks and markings. The Yonhet have two sets of slit-like nostrils cut into a wide nose, as well as a series of gills along their jawline.[3] 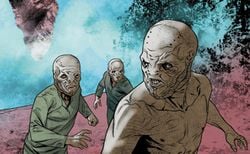 The Yonhet seem to possess an innate talent for the acquisition of various difficult to find items. They are also noted to have a natural skill at "sniffing out" Forerunner relics, and despite their predisposition for trade and smuggling being in some ways similar to the Kig-Yar, many Sangheili consider the Yonhet more reliable.[4]

The native language of the Yonhet is known as Yonhetian, and many members of the species also speak the Covenant's trade pidgin.[4] As a distinguishing trait, Yonhet seemingly refer to themselves in the third person in everyday speech.[2]