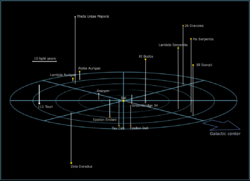 Under the administration of the Unified Earth Government, humanity has surveyed and colonized several hundred worlds across a portion of the Orion Arm of the Milky Way galaxy over 200 years of superluminal travel via slipstream space, following nearly three centuries of expansion across the Sol system. The planets under the jurisdiction of the UEG, together with humanity's homeworld, are collectively referred to as "Earth and Her Colonies".[1]

Over 110,000 years ago, humanity was an advanced, spacefaring race, and had colonized thousands of worlds across the Orion Arm of the galaxy. However, after being exhausted by the parasitic Flood and eventually suffering a disastrous defeat against the Forerunners in the human-Forerunner wars, the Forerunners forcibly regressed humanity to a Tier 7 species and all traces of this advanced civilization were erased.

The concept of space colonization was born out of the need to expand human habitation outside of Earth to prevent overpopulation, to alleviate the consumption of Earth's resources by conducting planetary mining on other worlds, and to better understand the universe as human civilization expanded. Various approaches were suggested to achieve this, such as colonization efforts of the Moon and Mars, building facilities on orbiting asteroids and creating artificial platforms.

The first recorded success of human colonization in the modern age was made in the later half of the 21st century, more specifically in 2080. The Moon and Mars saw humanity's first expansion, followed by a number of asteroids and the natural satellites orbiting Jupiter. The rapid pace of interplanetary colonization was driven by commercial interests more than the efforts on the part of national governments: Earth bio- and nanotechnology corporations sought to conduct scientific research unhindered by Earth's international law as well as its gravity. Mars, in particular, quickly became an important hub of leading-edge science and industry, and would continue to be so for hundreds of years, particularly in the area of spaceship manufacturing. Advancements in terraforming technologies transformed many of the formerly inhospitable planets and moons of the Solar System into worlds capable of sustaining life.[2]

Despite these successes, the efforts did not solve Earth's overpopulation issue. It eventually led to political unrest, contributing to the formation of political movements promising independence from the national governments on Earth and the perceived oppression by the United Nations.[3] Operating across the colonized worlds and orbital platforms of the Sol system, the Frieden movement and the Koslovics were the most prominent of these rebel factions. Beginning with a Frieden attack on the United Nations Colonial Advisors in the Jovian Moons and the subsequent UN response, battles were fought over the colony worlds—as well as Earth itself—from 2160 to 2170, culminating in a UN victory in the Interplanetary War. The outcome of the space wars led to the establishment of the Unified Earth Government as a centralized governing body tasked to ensure Earth's influence over the colony worlds and a powerful, united military force known as the United Nations Space Command.[3]

The technological innovation of the Shaw-Fujikawa Translight Engine in 2291 sprung the human civilization into the space-faring age, allowing them to travel beyond Sol system. Half a century later, the UEG constructed its first line of colony ships - led by Odyssey - to initiate the expansion of human habitation, relieving the growing pressure of overpopulation on Earth and the off-world colonies across the Sol system.[3] To manage governance in the extrasolar colonies as well as to ensure their security from pirates and other threats, the UEG established the Colonial Administration Authority and the Colonial Military Administration in 2310.[4] Two centuries later, both bodies would be marginalized—the latter due to widespread insurgent sympathies in its ranks—and eventually absorbed into the UNSC's emergency military government in 2525.[5]

As faster-than-light travel was still new and highly expensive, potential colonists were subjected to rigorous physical and mental testing to determine their suitability for the extrasolar colonization programs. As such, the colonists who formed the basis for the 210 first-wave colonies settled before 2390 formed humanity's elite; these worlds would later be known as the Inner Colonies. Earth and the Inner Colonies soon became the political and economic basis of the UNSC as humanity began expanding to the Outer Colonies.[3] For humanity at large, this was a time of unparalleled prosperity and optimism which has later come to be referred to as the "Golden Age" of human colonization,[6] a period which would eventually come to a violent end in the later years of the 25th century.[7]

Colonial expansion continued and by 2490, UEG colonial space encompassed over 800 colonies in the Orion Arm, including planets, moons, asteroids, mining facilities, and relay stations.[8] The success of colonization of the Outer Colonies made the Inner Colonies the primary stronghold, both military and economic, though they relied heavily on raw materials supplied by the Outer Colonies. During this period, the planet Reach (orbiting Epsilon Eridani, right on Earth's metaphorical doorstep) became the UNSC's primary naval yard and training academy. Reach was a major producer of warships and colony vessels, as well as a training ground for covert operatives and Special Forces.

The Inner Colonies' reliance on the Outer Colonies prompted the Unified Earth Government to maintain its hold over the Outer Colonies, but it inevitably began to lose its ability to do so as the Outer Colonies eventually surrounded the core worlds and far surpassed them in number. The overbearing influence of the Earth government, enforced by the UNSC and, initially, the Colonial Military Administration, led to a growing secessionist sentiment among Outer Colony citizens. The more radical elements of this movement took up arms against the UNSC, sparking a series of brushfire wars—collectively known as the Insurrection—in the late 2490s.[7]

On April 20, 2525, contact with the Outer Colony, Harvest, was lost. After failing to re-establish contact with Harvest, the Colonial Military Administration sent a scout ship, the Argo, to investigate. Contact with the Argo was subsequently lost after the ship arrived in the Harvest system, plunging humanity into a deadly war with an alien hegemony known as the Covenant. Harvest was bombarded from orbit in a process which would come to be known as glassing, marking the beginning of a 28-year war with the Covenant. During the war, hundreds of human colonies were destroyed and billions of human civilians and military personnel were killed by the Covenant. The conflict would see the near-annihilation of the Outer Colonies by the mid-2530s, with the Covenant flooding into the Inner Colonies until they destroyed humanity's military stronghold of Reach in 2552. The Inner Colonies narrowly avoided annihilation before the UNSC finally achieved victory against the Covenant in the same year, but communication and unity among Earth's surviving colonies had been utterly compromised amidst the galaxy-wide devastation.

Following the conclusion of the war, an extensive reconstruction process began in order to rebuild humanity's shattered colonial empire. By 2589, glassed colonies like Reach had been re-terraformed to some degree and open for re-settlement.[9] However, the absence of the Covenant threat also marked a resurgence in insurrectionist and secessionist activity, with worlds including Venezia rejecting Earth's offers of cooperation, accusing the UNSC of abandoning them during the war.[10] The UEG and Sangheili both administrated Joint Occupation Zones where the Shadow of Intent participated in combined anti-piracy operations with UNSC forces between May 6th and June 1st.[11] In early 2558, the region experienced in upsurge in Jiralhanae raids due to the Jiralhanae's dwindling resources.[12]

While the Unified Earth Government is technically a confederation of equal, independently-governed worlds, this is not true in practice;[13] the interests of Earth and the Inner Colonies weigh more heavily in the government's decision-making than those of the Outer Colonies. This has led to tensions and even civil war between the UNSC and the outer settlements,[14] which many of the Inner Colonies relied on for their foodstuffs and resources.[3]

Various organizations exist to provide military defense for the colonies. The Colonial Military Administration was created to act as a unified security force for the colonies but was eventually sidelined due to widespread corruption. The CMA's role was taken over by the United Nations Space Command, which many colonists resent due to its perceived draconian influence. Some colonies maintain their own territorial defense forces, including Sedra's Colonial Guard, as well as the Gao Republic's military. Anti-UNSC sentiments are not uncommon among these organizations, some of which—such as the Venezian militia—are openly secessionist. The UNSC also operated its own Colonial Militia program to train colonial citizens to deal with emergencies as well as local rebellion.[15]

Many colonies are named after locations on Earth, while others receive more descriptive or abstract names. Some worlds are only known by their astronomical designation, with the name of the star the world orbits followed by a numeric designation most often rendered in Roman numerals. On some colony worlds such as New Jerusalem, the capital city shares its name with the planet, as it is common for a colony's initial population center to be considered synonymous with the colony itself.[16]

As of 2490, human-controlled space encompassed around 800 colonized sites, including planets, moons, asteroids and various other outposts. The colonies ranged from heavily-populated and economically, politically and strategically significant worlds to struggling pioneer outposts which could barely sustain 10,000 colonists. Some worlds were terraformed to greater degrees than others depending on the local conditions and presence of indigenous life.[13] Many of the colonies were firmly under the influence of the UEG with some seeking to secede from humanity's empire.[3] The worlds are generally divided among the stable Inner Colonies and the more numerous and restless Outer Colonies, and are highly diverse in terms of culture; some worlds have their foundations in the cultural heritage of a single Earth nation, while others have more varied population bases.[17] After the Human-Covenant War, some worlds became even more heterogeneous with the emigration of former Covenant client species to the human sphere.[18]

The Inner Colonies encompassed a region of space in at least a 10.5 light-year three-dimensional radius from Earth. Beyond that were the Outer Colonies. Other colonies were established even further - Coral, at 42 light-years;[19] and Madrigal, which lay in the 23 Librae system, 83.7 light-years from Earth.[20] Despite its relatively short distance from Earth, at approximately 12 lightyears, Harvest was considered the furthest Outer Colony in 2525, at six weeks of Slipspace travel away from Madrigal and two months from Reach.[21] Despite its relative scale, humanity's empire takes up only a minuscule portion of the Milky Way galaxy itself, with most human-colonized systems existing within a bubble of several dozens of light-years around Sol in contrast to the overall scale of the galaxy which is 100,000 light-years in diameter.[note 1] However, humans often use the word "galaxy" in colloquial speech when describing humanity's sphere of influence.[22]