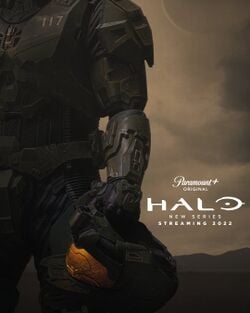 Promotional image of Halo: The Television Series set in the Halo Silver Timeline.

The Silver Timeline is an alternative timeline of the Halo universe that exists separately to the core canon of the franchise.[1][2][3] Differences from the core canon include: The Rubble surviving, a greater emphasis placed on WHITE TOWER, the existence of Silver Team and their members, Madrigal wasn't glassed by the Covenant in 2528, and different physical appearances for many characters. [1]

The Silver Timeline was named after the in-development codename for the The Television Series - Silver, a name also shared with the protagonist Spartan fireteam of the series.[1][3]

The Silver Timeline was not created to dismiss core canon, but was created to help give space, and to protect both the core canon and the TV show's story, allowing each iteration to best suit the medium for which it was developed.[1][2][3]

Silver's canonical details differ in a few ways from the core Halo canon (though not as drastically as the ongoing Fractures events featured in The Master Chief Collection and Infinite) for reasons that will be explained in the first season of the The Television Series. It features "familiar" and "new things" to the universe, though with some details changed to suit the needs of the television story.[3]