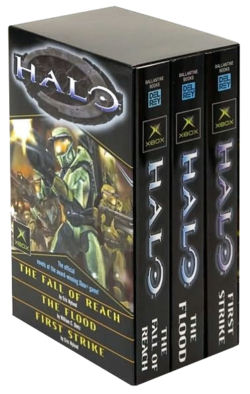 A box set of the first three Halo novels.

The Halo novels are books that have expanded heavily on the Halo universe.

The Halo novel project was initiated with the intent of establishing an "expanded universe" for future content. Contrary to popular belief, the project was overseen by Microsoft Game Studios Franchise Development Group and not by Bungie Studios (though they were given a significant degree of creative control).[1][2] The relationship between Bungie and Microsoft was somewhat rocky at this time,[3] with the former resenting Microsoft's creative interference in the Halo story and nearly having the first novel, Halo: The Fall of Reach, canceled.[4]

Although the novels have always been considered canonical,[5] the stories they told were generally regarded as distinct from the Halo games' stories in some respects, with both games and the "expanded universe" forming their own standalone narratives.[6] Additionally, there were sometimes creative differences between Bungie and the novels' authors;[4] for example, Bungie's writing staff disliked the notion of Avery Johnson's immunity to the Flood introduced in Halo: First Strike[5] and retconned the circumstances of his survival in the Halo Graphic Novel. However, Bungie would nonetheless introduce several elements originating from the novels into their games; an example of this are the Orbital Drop Shock Troopers and the orbital defense platforms.[4] Following the advent of 343 Industries and their philosophy of expanded connectivity between Halo media, the writing process of the novels has become more extensively intertwined with the planning of the stories of the games and other fiction.[7]

The first three novels were published by Del Rey Books. Microsoft Studios' next publishing partner was Tor Books, which published all Halo novels from 2006 to early 2014. The three initial Halo novels were reissued by Tor in 2010. While mostly unchanged, the new versions feature additional content and several alterations. In 2014, 343 Industries entered a contract with Gallery Books as the publisher of subsequent Halo literature.[8]