This article is about the battle during the Human-Covenant war. For the battle in 2558, see Second Onyx conflict.

The Onyx Conflict[2] was a military engagement between the Forerunner Sentinels of the planet Onyx, United Nations Space Command (UNSC) and a fledgling Covenant splinter group. The UNSC operation to reinforce the stranded UNSC forces on Onyx was codenamed Operation: CIRRUS.[3]

When Alpha Halo was almost activated,[4] it emitted a signal that placed all other Forerunner installations in standby mode, including the Sentinels guarding the shield world located within the artificial world of Onyx. The Sentinels themselves first appeared on the morning of September 21, 2552.[5] On October 31, 2552, the first of these Sentinels to awaken suddenly began attacking UNSC forces on and near Onyx. Coincidentally, Gamma Company was participating in the top honors exercise at the time.[6]

Almost immediately, Team Gladius and the orbiting UNSC Agincourt were destroyed and Team Katana lost after passing to Zone 67. The SPARTAN-III trainers, save for SCPO Mendez and Kurt Ambrose were all killed as well. In accordance with emergency protocols, Zone 67's AI Endless Summer assumed complete command of all UNSC forces on Onyx.[7] Shortly afterward, Team Saber regrouped with Kurt-051, Tom-B292, Lucy-B091 and SCPO Mendez, although they had no means of summoning reinforcements from the rest of the UNSC. Mendez declared Bloody Arrow via UNSC E-Band.[8]

On November 3, Dr. Halsey, Kelly-087 and AI Jerrod arrived at Onyx aboard Beatrice. Attacking Sentinels forced the ship to crash land on the planet, although all three passengers survived to link up with Kurt-051's group. Halsey proceeded to convince the resident ONI AI, Endless Summer, to send a distress message to Earth using the Slipspace COM launcher. In the signal Halsey requested the deployment of SPARTAN-IIs to Onyx.[9] The launcher was destroyed shortly after firing.[10]

Using Cortana's distress signal from Installation 05 as a "carrier wave",[9] the message succeeded in reaching a besieged Earth in mere hours and diverting Blue Team to Onyx.[11] However, en route the message had been intercepted by the Covenant. The newly promoted Sangheili Fleet Master Voro Nar 'Mantakree of the Second Fleet of Homogeneous Clarity was deployed to Onyx under orders to destroy all UNSC forces and recover any Forerunner artifacts, as the Sangheili had not yet made a formal alliance with the UNSC.[12]

Blue Team and the Covenant arrive[edit]

Blue Team, composed of William-043, Linda-058, and Frederic-104, arrived at Onyx aboard the commandeered Bloodied Spirit, but were forced to make their way down to the surface in a Spirit when their ship was attacked by Sentinels. Linking up with Kurt-051's group they planned to attack Zone 67. Using the Spirit, they flew into a crater and discovered a Forerunner city.[13]

At the same time, 'Mantakree's forces formed around the flagship Incorruptible and began nearing Onyx. The destroyer Far Sight Lost was sent ahead to scout the environs but was quickly engaged and destroyed by Sentinels. Another scout, Absolution, was ordered to perform a precision Slipspace jump to the northern polar areas of Onyx, but the Sentinels followed it through Slipspace and the Absolution was destroyed upon exiting Slipspace.[14] However, sufficient information had been gathered and 'Mantakree ordered his ground troops, including Sangheili from the E’Toro, R’Lan and N’Nono warrior crèches, to converge on Zone 67.[15]

Shortly after 'Mantakree had engaged the Sentinels, the UNSC Dusk arrived by Slipspace from Earth, having utilized the Bloodied Spirit's slipspace wake. The prowler provided advanced intelligence for a battlegroup under the command of Admiral Carl Patterson that arrived shortly thereafter. Intending to catch the enemy off guard, the UNSC force homed in on a group of Covenant destroyers and destroyed all but one destroyer. The UNSC Glasgow Kiss was sacrificed to preserve the UNSC Stalingrad from plasma fire from the lone destroyer. The Glasgow Kiss intercepted three of the four lances of fire and launched 12 escape pods before it was destroyed.[16]

Despite taking multiple hits, the Covenant destroyer fled to the other side of Onyx, leading the UNSC force into a trap of twenty additional Covenant warships. Several more Covenant destroyers were eliminated, but the launch of a massive plasma volley forced the UNSC ships to accelerate into the attack and close the distance to forestall a second volley. Only five UNSC ships survived the charge, of which one, the UNSC Iwo Jima, was destroyed when she detonated a nuclear weapon and her engine, destroying a further two Covenant warships and damaging six more in the ensuing explosion.[17]

Defeated once more, the remaining Covenant ships withdrew again to the opposite side of the planet but were there attacked by Sentinels who used plasma capture to destroy yet another three destroyers. Realizing their peril, the Covenant ships began to withdraw from Onyx's gravity well. Two ships were used as a rearguard and one was destroyed. 16 ships escaped in all.[18]

The intervention of the Sentinels allowed the UNSC ships time to regroup around Onyx's moon. There Dusk laid a minefield of 14 HORNETs, each rating at thirty-megatons with vacuum-enhanced loads. The UNSC warships then opened fire from behind the moon, hitting some of the enemy but causing negligible damage, but drawing the Covenant's attention. As the Covenant closed to engage and entered the field the HORNETs were detonated, destroying all but four of the remaining Covenant warships. Two of these were immediately set upon by the UNSC and destroyed. The remaining two whipped around the moon and as battle was about to be joined again, a Covenant fleet of 32 ships arrived from slipspace. Patterson's battle group was completely destroyed, except for Dusk, in the one-sided engagement that followed. The UNSC battle group amazingly destroyed a total of 20 Covenant ships throughout the battle before being totally annihilated by the arrival of the new Covenant fleet.[19]

Retreat to the shield world[edit]

While the UNSC and Covenant fleets traded space-borne crossfire whilst in orbit, in the Forerunner city Kurt-051's group of survivors was engaged by Covenant troops led personally by Voro Nar 'Mantakree. The SPARTAN-IIs and IIIs held off the enemy advance while Halsey, aided by Kelly-087 and Mendez, configured Onyx's teleportation grid, their means of escape. Dante-G188 was killed rescuing Frederic-104 from plasma and Needler fire. Once the teleportation grid was functioning, the humans moved to the Sentinel manufacturing facility near the north pole in the aim of destroying it. At the advice of AI Endless Summer, this would save Admiral Patterson's battle group. Halsey identified three key structures in the facility and they were destroyed by tricking Sentinels into firing on them.[20] Moving on, Kurt-051's group came upon Team Katana trapped in slipspace field pods. Unable to free the prisoners, the humans were forced to bring the sarcophagi with them as they traveled to the core room antechamber where they prepared a stand against pursuing Covenant troops.[21]

While two legions of Unggoy attacked Lieutenant Commander Kurt-051 and his forces atop the stepped structure, the remainder of the attackers set up stationary shield generators and placed three groups of thirty Sangheili and one Mgalekgolo pair behind each shield. From this jump-off point, the Sangheili formed a wall using Kig-Yar point defense gauntlets and began to advance through grenade and sniper fire. When the Covenant reached the first step, redeployed Lotus mines killed several Sangheili and dazed Mgalekgolo. One Mgalekgolo was dispatched by Kurt-051 before they could recover. Kelly-087 engaged and killed three energy sword-wielding Sangheili and was then flanked by two more Mgalekgolo but was saved by Holly-G003, who was killed in the effort.[22]

The Spartans piled onto the two Mgalekgolo. Kurt-051 was wounded. Will-043 killed one Mgalekgolo, that had been shot by Linda-058, in hand-to-hand combat but was in turn shot and killed by the second. The last Mgalekgolo was killed by Fred-104 with a Jackhammer missile mainly for efficiency reasons, as it could take down a Mgalekgolo with one hit.[22] 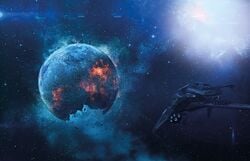 Onyx disintegrating into trillions of sentinels.

However, the main Covenant assault with hundreds of Sangheili, Banshees and Unggoy, was yet to come. Realizing it was futile for his diminished force to resist further, Kurt-051 ordered the survivors into the shield world while opting to remain behind to prevent the Covenant from reopening the portal. 'Mantakree ordered his troops to not fire upon the center of the chamber, while sending in Huragok with slipspace field shunts to reopen the portal. With 'Mantakree approaching to finish off the wounded Spartan personally, Kurt-051 detonated two FENRIS warheads, killing himself and the entire enemy force in the antechamber as well as triggering the Sentinels of Onyx to "erupt" through the surface of the planet. With the portal closed, his comrades who had escaped into shield world were trapped, but unharmed.[23]

With the shield world closed and gated, Onyx disintegrated into its trillions of component Forerunner Sentinels. The Covenant fleet, so recently victorious against the humans, were finally obliterated by the swarm of vigilant constructs. Only the UNSC Dusk managed to escape alive and intact.[24]

Kelly, Fred, Ash, and the other remaining Spartans (including Dr. Halsey and Mendez) were transported from the portal to a Dyson sphere.