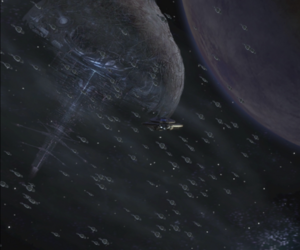 The Covenant fleet is a general term for the vast space-borne naval components of the Covenant's military forces.[1][2] Their roles included ship-to-ship combat, orbital bombardment, the deployment of fighters and bombers and the method of delivery for the Covenant's occupational ground forces. At its height, the Covenant fielded thousands of warships, most being able to carry fighters, dropships, ground troops and vehicles. Each Covenant fleet unit is essentially a fully-rounded armada, and is given a unique name with religious connotations similar to how Covenant vessels and colony worlds are named by their beliefs.

Although the Covenant's collective naval forces are referenced in some contexts as the Covenant Navy,[3][4] the Covenant did not maintain distinct service branches in the same manner as the United Nations Space Command and traditional human militaries; instead, the Covenant fleets fell under the authority of various ministerial organisations.[5]

After the Covenant's defeat at the end of the Human-Covenant War, most of these scattered assets fell under the control of the various Covenant remnants.

Despite the seemingly monolithic nature of its armed forces, the Covenant does not maintain a single standing navy. Instead, its fleets are partitioned between several martial and ministerial organisations, expanding and contracting as their parent ministry's influence waxes and wanes in prestige and influence.Template:Ref/Reise Fleets could be broadly split into two major groupings:

Fleets under the Ministry of Resolution were originally tasked with patrolling Covenant space, protecting shipping and eradicating pirates, but was vastly expanded during the early stages of the Human-Covenant War to serve as deep-space exploration units beyond the fringe, protection for Ministry of Tranquility missionary ships, and front-line units in the conquest and destruction of humanity.[8] As the war with humanity wore on, the Covenant were forced to transfer patrol units to front-line fleets to replace combat losses, hoping to hide the damage humanity was managing to inflict from Sangheili leaders. Being posted to a fleet under the Ministry of Resolution was considered honorable, due to being removed from normal society for extended periods.[7]

Fleets under the Ministry of Fervent Intercession were tasked with locating and securing Forerunner worlds and artifacts, and possessed enough zealots that it was considered a semi-monastic order. Fervent Intercession fleets tended to be smaller, but acted largely independently of any external chain of command except where it served their purposes, but were able to call upon the resources of other fleets, and even directly from the colonies, due to ancient writs that dated back to the formation of the Covenant. Fleets under the Ministry of Fervent Intercession had a formidable reputation even among the Covenant, and were largely used to seize and defend Forerunner sites on human colonies during the war.[7]

Fleets under the Ministry of Tranquility were, ostensibly, tasked with finding Forerunner artifacts and bringing new species into the Covenant fold. In practice, however, they functioned as little more than pirates, frequently picking off relics held by other Covenant fleets, and their so-called missionary ships were often merely slavers and raiders crewed largely by Kig-Yar. Not beholden even to the High Prophets, of whom the Prophet of Regret himself was the former Vice-Minister of Tranquility, these units rarely served as combat units during the Covenant conquest of human colonies, but would arrive to steal whatever relics had been secured from human defenders or their Covenant "allies" in the chaotic aftermath.[7] 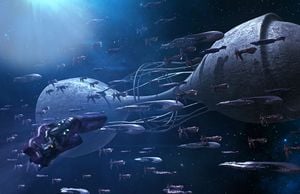 A fleet surrounding Unyielding Hierophant, one of the largest fleets next to the High Charity defense fleet.

Other Covenant ministries are known to have their own forces, though not in such great numbers. In 850 BCE the Ministry of Anticipatory Security sent forces to secure Forerunner relics on Janjur Qom, and escort female San'Shyuum volunteers to High Charity. The disastrous mission led to the ministry's total dissolution, and the punishment of the Minister involved.[9] In 2525, The Ministry of Conversion was technically the only body authorized to send ships to make contact with possible convertees, though this was routinely ignored by the Ministry of Tranquility. The Ministry of Preservation was specifically mandated with putting down local uprisings and secession attempts by the client races, and its forces were led by future Arbiter Ripa 'Moramee before 2531.[10] In 2552, Thon 'Talamee, shipmaster of the Clarity of Faith, escorted Covenant supply convoys under the Ministry of Fortitude, a ministry ostensibly tasked with ensuring the proper distribution of Forerunner relics across the Covenant.[11] The Ministry of Abnegation held authority over the Sangheili Ascetic orders,[12] and the Ministers of Inquisition and Etiology both served in Covenant fleets with some considerable authority.[13][14]

The largest known fleets have been known to consist of around one hundred starships of all types and variations,[15] and are led by a prominent flagship, which is often an assault carrier or in rare cases a supercarrier. Capital ships, such as the iconic Ket-pattern battlecruisers, as well as numerous frigates and destroyers, usually serve as escorts to the flagship. Fleets are sustained by numerous logistics vessels, such as agricultural support ships, which are organizationally attached to warship fleets, providing food and supplies.[16] Covenant fleets were divided into tactical battle group formations that were used in specialized roles.[17]

A number of combat legions are often attached to a given Covenant fleet, stationed aboard the various warships available.[18]

The title of a Covenant fleet's commander varies depending on the size and extension of the fleet itself. While smaller fleets or temporary task forces are led by Fleet Masters, larger fleets are commanded by Supreme Commanders. There are also cases where an individual with the title of Shipmaster has had command of a fleet.[19][20] A fleet's highest-ranking individuals convene in a group known as Council of Masters.[21] In some cases, a Minor Prophet or a San'Shyuum High Councilor is attached to a fleet as a representative of the High Council.[22]

A combined fleet, as its name implies, is comprised of multiple smaller fleets and is led by a Supreme Commander. Though typically well beneath the command of an Imperial Admiral, they can be relegated to commanding a Combined Fleet as demonstrated by Xytan 'Jar Wattinree during his exile to the borders of Covenant space under the direct orders of the High Prophets.[23] Combined fleets have larger duties, such as safeguarding and policing entire regions of Covenant-controlled space on their own. These fleets can have several hundred ships. High Charity was guarded by a combined fleet at all times. Some combined fleets are formed on a strictly temporary, task-oriented basis, such as a major invasion of a key enemy system.

By the time of the Fall of Reach, the Office of Naval Intelligence knew of at least four Covenant fleets of similar size to the Fleet of Particular Justice prowling the human sphere, though the specific names and organisation of these elements is unknown.[24] 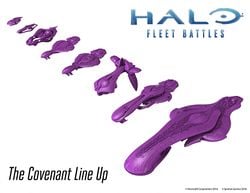