The Mjern-pattern agricultural support ship[3] (UNSC three-letter classification: DSC-class support ship),[1] is a type of support vessel that was used by the Covenant attached to their wandering fleets.[4]

Unlike most Covenant vessels, the Mjern-pattern agricultural support ship was not designed solely for combat, but also to provide fresh food, water, recreational opportunities, replacement parts, and more for their attached fleet.[4][7][3] These support ships generally contain large hunting preserves holding many types of animals to be hunted, killed, and fed to the personnel of the fleet.[4][1] During the time of the Covenant, vessels of the class were primarily crewed by Huragok and Unggoy, with little to no Sangheili on board, and were commanded by a single Minor Prophet.[4] The "S" (for Salvation) in the UNSC's "DSC" hull classification code for the Mjern-pattern indicates that the ship is a dedicated warship,[8] likely due to the fact that the Covenant had no conception of a "noncombatant" starship and fitted the class with sufficient weaponry to carry out military tasks, if required.[3]

Fleets which do not have a Mjern-pattern ship attached are forced to rely upon logistics space stations, such as the Station of Constant Sustenance, during long journeys.[9] 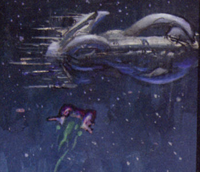 A side view of the Infinite Succor.

Featuring a vaguely-triangular silhouette with a curved aft and holes cut into its superstructure, the Mjern-pattern agricultural support ship is immediately distinguished from any other class of Covenant warship. The rear and fore sections are connected with four massive arches that are angled slightly outwards, with a wide but thin platform connecting the port and starboard sides. It is here that the support ship's Tertiary Assembly Forges are located, made up of factories and workshops that manufacture food packs, maintenance kits, clothing and even small arms for its tenant fleet. Were Covenant Mjern-pattern vessels to produce more material then needed, they would ship off their products to High Charity for redistribution. Carefully protected by the ship's superstructures are two massive hunting domes, which serve as training areas, recreational zones, cloisters of worship, and animal paddocks. They are divided between multiple unique biomes, although these are usually comprised of environments comfortable to the San'Shyuum and the Sangheili. However, these can be adapted to service the particular needs of other species, such as vermiaries that sustain Lekgolo colonies transplanted from their homeworld of Te. On the very back of the vessel is a tall semi-circular structure that extends both from the top and bottom. The outer surface is pockmarked with numerous relays and mediator consoles for the ship's proselytization network, which would allow the Prophets to reach out to faithful hearts and coordinate the military and administrative activities across the Covenant's many worlds.[2]

A variant of the Mjern-pattern agricultural support ship that was built and maintained by the Ministry of Preparation has the larger aft hunting dome removed. Instead, it is filled with arcane instrumentation and a staff of chirurgeons to create Prelates.[2]

Being designed as a support ship first, the Mjern-pattern agricultural support ship had an unusually-large crew and small complement, carrying over ten thousand personnel. Of these, only seven Obedientaries and 150 Warriors stood ready to defend the ship from boarders. 9,800 Menials manned most of the ship's systems, and twenty Huragoks were stationed on these ships to maintain much of the Covenant's technology. Other crewmembers included the sole Minor Prophet, forty Hieromonks and ten Celebrants.[2] In a standard fleet, the Minor Prophet reported directly to the High Council and was expected to serve the Supreme Commander as a religious authority, logistics coordinator, and mediator.[2][3]

Although classified as a support ship, the Mjern-pattern is equipped with enough weapons to adequately fend off most threats. Its primary ship-to-ship weapons are its six Jaet-pattern plasma torpedo silos. These fire guided comets of superheated plasma that are difficult for warships to outmaneuver in combat, and are capable of causing severe damage to human ships. Backing this up are twelve Melusean-pattern plasma cannons, which are similar but fire unguided munitions. For point-defense purposes are twenty Pallio-pattern pulse laser turrets.[2]

The Mjern-pattern agricultural support ship was introduced during the Third Age of Reclamation.[3] Before first contact with humanity, procurators like Mjern-pattern vessels supported the Covenant fleets that ventured far from established supply lines in search of Forerunner relics to plunder and species to convert to the path of the Great Journey. While bulk transports and barges based on High Charity supplied their need for food, water and power cells, Mjern-pattern ships would improve the endurance of their fleets with additional food from hydroponic pods, hunting grounds and recreation, and using their great maintenance forges and Huragok savant-technicians to repair their weapons, armor and Forerunner mechanisms. Surprisingly, these support ships could not be directly commanded by the militant orders or system governors, although their missions are so closely aligned that disagreements are unheard of. Nevertheless, despite their abundance during the height of the Covenant's power, there were only a handful of ways to acquire the dedicated services of Mjern-pattern agricultural support ships without direct intervention from the Hierarchs. This was done to not only reinforce the dependency colonies and fleets had on the Prophets, but also to restrict the power of the Sangheili and Covenant's militant factions. As a result, each Supreme Commander was responsible for ensuring this approval was gained and maintained, while also conducting the political machinations needed to ensure that that warriors, vehicles and ammunition are delivered regularly.[2]

Massacre of the Outer Colonies[edit]

By March 2526, the Fleet of Inexorable Obedience had several Mjern-pattern agricultural support ships serving as part of its logistics support fleet. As the main force travelled to the human Outer Colony of Biko, the DSC-class support ships were left behind at their previous target of Etalan along with the rest of the fifteen-vessel logistics fleet. When a small UNSC force arrived at Etalan to target the logistics fleet, the Spartans leading the operation ignored the support ships in favor of destroying its accompanying equipment freighters and bladder ships.[10]

Later in 2531, Mjern-pattern support ships were present as part of the Covenant occupation of the exterior of the Forerunner shield installation, Trove. At least one such ship was shot down over Trove and impacted on its surface—ultimately succumbing to the world's large-scale widespread infestation of the Flood.[11]

At least one Mjern-pattern agricultural support ship, the Infinite Succor, was attached to the Fleet of Particular Justice and participated in the Battle of Installation 04. The Infinite Succor became infested by the Flood who attempted to use the ship to escape the Halo ring and spread into the galaxy. Unable to contain the Flood infestation, Special Operations Commander Rtas 'Vadumee sent the ship on a slipspace jump into the Soell system's star, destroying it and the Flood onboard. Only Rtas himself survived the engagement.[7]

Prior to the Great Schism, the Prophet of Truth lured many Minor Prophets in command of these vessels into his service, using the promises of wealth and privilege to guarantee the shipmasters would support his Jiralhanae fleets. After the Fall of High Charity and the death of Truth, these ships would abandon the Covenant, fleeing to join the surviving San'Shyuum in exile.[2]