"There were not many San'Shyuum who could match your skills or your devotion - and now perhaps there are none."
— The Minister of Preparation, regarding Tem'Bhetek

The Prelates were an order of San'Shyuum organized by the Covenant Ministry of Preparation. Prelates were genetically enhanced San'Shyuum trained to serve as supersoldiers for the Covenant. Prelates have the ability to briefly amplify their strength and agility with the use of chemicals at the risk of inebriation. Most Prelates were killed during the Battle of Installation 05, with the exception of Tem'Bhetek[1] and Dhas Bhasvod.[2]

Prelates were select San'Shyuum individuals selected to enter the Sacred Promissory, under the Minister of Preparation's discretion, where they were subject to the use of the Promissory's Forerunner technology to alter their minds and bodies. Prelates were able to apply for removal from the Roll of Celibates following this procedure, though some fears around whether these procedures may ruin potential chances for healthy offspring remained.[1] Senior Prelates in the San'Shyuum hierarchy often retreated to the purpose-built Garden of Reverent Contemplation for thought and meditation.[3] Prelates trained within the Sacred Promissory, with the Minister of Preparation hoping they would prove to be a suitable match for humanity's Spartan supersoldiers.[1]

When the Jiralhanae were first introduced into service in the Covenant military, they were typically given command of smaller and older warships such as the Zanar-pattern light cruiser, which themselves were often stripped of technologies deemed too risky by the Sangheili as no self-respecting Sangheili warrior would give up frontline combat duty to train up Jiralhanae crews. Following the ascension of the Prophet of Truth to the hierarchy in 2525, the Prelates were assigned to Jiralhanae vessels officially as technical advisors, but secretly to retrofit these ships for combat and train up the brutes for combat against the Sangheili. Following the disastrous destruction of Installation 04, the Sangheili were quick to fall out of the Prophets' favour, and thus the Prelates redoubled their efforts to equip the Jiralhanae for the upcoming conflict.[1]

Some Mjern-pattern agricultural support ships operated by the Ministry of Preparation saw some of their hunting preserve facilities removed and/or refit with genecrafter vaults, fitted with arcane instrumentation and a staff of chirurgeons for the purposes of creating Prelates.[4]

By the time of the eruption of civil war around Installation 05, the Prelates and their crews were quick to take initiative, taking the Sangheili fleets stationed around High Charity off-guard, eliminating the CAS-class assault carrier Eternal Reward quickly and intending to focus efforts on Shadow of Intent, though the outbreak of the Flood soon switched the tables in the Sangheili's favour. The Sangheili fleet actions and blockade ultimately eliminated many Prelates, and - like the San'Shyuum species as a whole - they became a rare sight following the Battle of Installation 05 and the later fall of the Covenant. By 2553, Tem'Bhetek thought he was the last of the surviving Prelates.[1]

Another surviving Prelate was Dhas Bhasvod who helped to secretly organize the launch of the San'Shyuum flotilla during the Fall of High Charity, using the launch of the Anodyne Spirit as a distraction. Bhasvod and his forces were left behind on the Forerunner keyship during the Battle of Installation 00 and survived the firing of Installation 08 thanks to the keyship's protection. Bhasvod and his troops would remain undetected for nearly seven years by the various factions that would occupy and fight over the Ark.[2]

"And I promise: we will make the Sangheili pay for everything they have done."
— Boru'a'Neem telling Tem'Bhetek his plans for revenge against the Sangheili.[5]

Tem'Bhetek was able to survive the Fall of High Charity, having met the Minister of Preparation in the station's docking spires and subsequently escorted the Minister to safety. Over the subsequent months, Tem'Bhetek's faction of allied Jiralhanae hatched a plot to capture Shadow of Intent and use it to transport a Prototype Halo installation to Sanghelios, with the intention of wiping out the Sangheili species permanently. Ultimately, Tem was captured by Rtas 'Vadum during the Ambush at Duraan, where he eventually came to realize that the Minister had deceived him and joined Rtas' forces for the Battle of the Prototype Halo installation, ultimately sacrificing himself.[1]

In October 2559, Prelate Dhas Bhasvod and his faction of surviving Covenant loyalists on the Ark allied themselves with the Keepers of the One Freedom and the Forerunner archeon-class ancilla Intrepid Eye in an effort to fire the Halo Array, but they were opposed by both forces from the Banished and the UNSC Spirit of Fire. The mission ended in a failure with the alliance between the two Covenant remnants dissolving before the Spirit of Fire destroyed the Epsilon Clarion installation and Intrepid Eye with an orbital bombardment of EMP MAC rounds. Undaunted by his defeat, Bhasvod killed Mark-G313 and departed to link up with his remaining forces.[2] 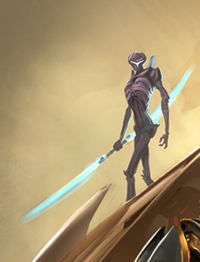 The augmentations provided to Prelates were developed in the Sacred Promissory of High Charity and included genetic, physical, and chemical changes, as well as suits of highly advanced powered armor and intensive combat training. Prelates were capable of releasing chemicals into their bodies to enhance their combat abilities, or to attempt to control their consciousness, as Tem had done before to attempt to stay asleep and continue exploring the traumatic dream brought about by the Flood's assault on High Charity.

Prelate fighting skins included an anti-gravity belt that could be used to quickly propel themselves in various directions, or allow them to engage in limited flight. The armor also included a gauntlet made of hard light, which when activated produced a crescent blade on the forearm, as well as a shield of hard light to deflect shots that managed to connect with the highly mobile Prelate. Prelates were considered formidable foes, powerful enough to give even veteran Sangheili pause.

The augmentations given to the Prelates were not without risks, however. Prelate abilities were expected to be used in short bursts; pushing their bodies too far could cause sudden exhaustion, seizures, and—in rare cases—death.

While Prelates first appeared in the character of Tem'Bhetek in the 2015 novella Halo: Shadow of Intent, they were first mentioned in the 2005 release of the Halo 2 Multiplayer Map Pack. The map pack released with a manual, in which the description for the map Gemini provided the first Halo universe mention of the Prelates.