2553 was a year in the 2550s in the 26th century. It was the first year that saw relative peace for humanity as the Covenant ceased to exist following its collapse during the Great Schism and its defeat at the end of the Human-Covenant War.[1] The end of the war was formalized with a ceremony in March 2553 with a prior treaty agreed upon between the Unified Earth Government and the Swords of Sanghelios in February 2553. Despite the end of large-scale hostilities and the absence of humanity being threatened with extinction, new factions sprung up in the power vacuum left behind by the ancient empire and new battles followed. 2553 was a year that saw the United Nations Space Command make major advances in terms of its technological prowess and military capability, despite a lesser reach over the galaxy incurred by the loss of so many colonies and assets during the decades of war. Ex-Covenant societies were faced with the challenge of redefining their purpose in a galaxy that no longer provided them with the rigid structure the hegemony had. Some sought revenge on humans and some on others from the Covenant. Some sought to be left alone and others made grabs for power. And some, such as Thel 'Vadam's Swords of Sanghelios, made in-roads with their former enemies for the mutual benefit of all parties.

January 1 After days of no indications that they were soon to be rescued following the destruction of Glyke and the UNSC Vacuna, Gray Team enters cryostasis.[2] 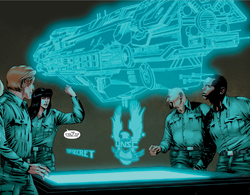 January 2553: Ilsa Zane announces her intention to steal the Infinity. 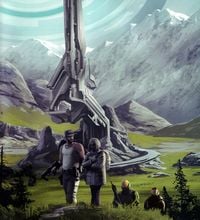 February 2553: The survivors of the Onyx Conflict within the shield world 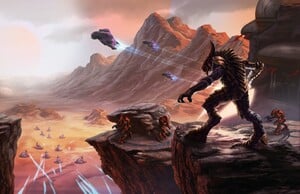 March 2553: The Servants of the Abiding Truth launch an attack on Kolaar Mountain. 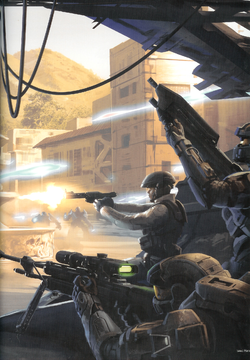 September 2553: Tem'Bhetek engages Rtas 'Vadum and Tul 'Juran aboard the Shadow of Intent.