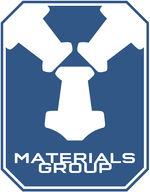 The emblem of the Materials Group.

Materials Group is a division of Section Three of the Office of Naval Intelligence[1] posing as a government-contracted technology firm,[2][3] that is responsible for researching, developing, and manufacturing technologically advanced matériel. The Materials Group's most important development has been the design of the MJOLNIR Powered Assault Armor and the powered exoskeletons which preceded it,[4][5][6] as well as several specialized variant models.[7][8][9][10][11][12]

During the early years of the Insurrection in the late 25th century, Materials Group developed the X23 Non-Nuclear Electromagnetic Pulse Cannon, which was designed to disable weapons of mass destruction before detonation. Though this technology had existed since the 20th century, the X23 was the first truly precise application of the technology. Once Materials Group deemed that the X23 was a viable tool, it was mounted on a transport chassis; this resulted in the creation of the XRP12 Combat Support Vehicle, commonly known as the Gremlin.[13] 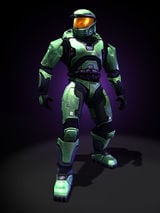 Unimpressed with previous attempts at producing powered exoskeletons but requiring a battle suit to complement her Spartan-IIs, Catherine Halsey sought to develop an entirely new battle suit from the ground up. Working with Materials Group, she founded Project: MJOLNIR to achieve this aim, which Halsey felt was the realization of the goals of previous failed power armour and exoskeleton projects.[4][14][15] However, MJOLNIR, rather than being a bulky powered exoskeleton, would be a self-contained, nearly form-fitting body suit; it would augment the wearer's physical abilities to superhuman levels, though it would require dangerous genetic modification to function safely. The first production model of MJOLNIR was developed at Materials Group's Damascus Materials Testing Facility on Chi Ceti IV, and was introduced to the recently graduated Spartans on November 27, 2525.

Halsey intended for MJOLNIR to remain a single, continuous system that would be incrementally updated as upgrades became available. However, in 2535, Materials Group required that a generational categorisation system be introduced for the MJOLNIR armour, for the purposes of serialisation and prioritisation, and as a means of fiscal oversight. While Halsey was displeased with the mandate, she chose to comply in order to "keep the accountants out of [her] hair and her work", though she noted that she still intended to treat MJOLNIR as an evolving platform, with the categorisation system existing to make it seem neater on paper.[16]

Consequently, the history and future of MJOLNIR was divided into discrete numbered classes. First, Marks I, II and III referred to three prototype iterations before the first production model. Next, all production models of MJOLNIR were grouped under the Mark IV banner, given their similar specifications. Finally, Halsey laid out a prospective roadmap of specifications for three future iterations, Mark V, Mark VI and Mark VII, though she expected these specifications to be mutable depending on time, budget and other limitations that could crop up.[16] Materials Group continued to develop the main MJOLNIR series, resulting in several superficially distinct versions which, despite their drastically different appearances, were all classified as Mark IV due to their internal architecture.[17]

On November 24, 2551, the Mark V generation was introduced.[5][18] This version featured energy shielding technology, which was previously thought to be impossible to reverse-engineer from Covenant technology. It also introduced the ability to accommodate a starship-grade smart artificial intelligence. In late 2552, the Mark VI was introduced. Though it offered few groundbreaking improvements over the Mark V, aside from an automated biofoam injection system, numerous components were refined, making the Mark VI among the most powerful pieces of technology ever created by humanity.

Following the end of the Human-Covenant War the Mark VI was quickly replaced by MJOLNIR GEN2.[19] While the MJOLNIR Mark VII was produced it was not as cost effective or versatile as the GEN2 platform.[20]

In addition to the main MJOLNIR series, Materials Group developed several purpose-specific variants. Though several other variants have been produced, they were designed by private defense contractors, not by Materials Group. 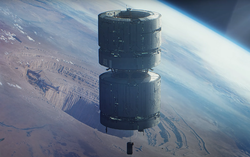