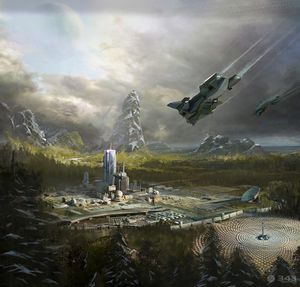 "This place will become your home, your fellow trainees will be your family now. The training will be difficult. There will be a great deal of hardship on the road ahead, but I know you will all make it."
— Dr. Catherine Halsey to the SPARTAN-II recruits

The Reach FLEETCOM Military Complex[1][note 1] was a UNSC military compound located on the surface of the planet Reach. It was part of the UNSC military nexus in the Highland Mountains, also home to CASTLE Base, Camp Hathcock, Military Reservation 01478-B and Reach HIGHCOM. The complex housed Reach's Naval Officers Academy, and served as one of the primary housing and training facilities for the Spartan-IIs upon their initial indoctrination up until their graduation.[2][3]

The FLEETCOM Military Complex was a major base, being home to numerous barracks constructed mainly of cinderblock, parade grounds, firing ranges, obstacle courses, and an airfield. The Naval Academy was located some distance away from the SPARTAN-IIs' dedicated compound and served as the Spartans' primary theoretical education facility.[4] Underneath the surface were extensive underground facilities housing an amphitheater which served as a highly secure briefing chamber. Between the surface and the amphitheater were 300 meters of steel and concrete; the facility was said to be well fortified that it could withstand the force equivalent to an 80-megaton nuclear blast.[5]

On September 23, 2517, John and 74 other recruits where brought to the secure amphitheater of the complex where they were conscripted into the Spartan-II program by Dr. Catherine Halsey in accordance with UNSC protocol. The children were then escorted by their handlers to the facility's barracks where they had a meal and went to bed. The following day, the Spartans were awoken by CPO Franklin Mendez who took them out for morning calisthenics and then led them to Reach's Naval Officer's Academy to be taught by Déjà. They kept a similar daily routine at the complex for many years.[6]

In 2525, following their recovery from the augmentation procedures, the Spartans could no longer be trained at the complex due to complications that arose. On their first day back at the base, three trainers were accidentally killed during hand-to-hand combat exercises. The Spartans were relocated to the abandoned titanium mine shafts in the nearby mountains where their trainers donned Mark I exoskeletons in order to protect themselves from the Spartans' newly enhanced strength.

On November 2, the Spartans gathered once more inside the secure briefing room of the UNSC military complex. There they were briefed by Vice Admiral Stanforth and his AI attaché Beowulf on a new threat. Communication with the outer colony world Harvest had been lost and scout ships sent to investigate found the planet reduced to ash by an alien hegemony that called itself the Covenant. The Covenant proclaimed humanity's annihilation by broadcasting the transmission "Your destruction is the will of the gods...and we are their instrument" in the English language. With the UNSC's mobilization to retake Harvest underway, the Spartans were to begin the next phase in their training. Before exiting the chamber, John spoke one last time with Chief Mendez who was being reassigned to train the next class of Spartans. Before parting ways, Mendez returned a quarter which had been confiscated from John when he was first inducted into the program.[7]

On August 27, 2552, all available SPARTAN-II's gathered inside the amphitheater of the compound for a third and final time. There they were briefed on their next mission: to acquire a Covenant vessel, infiltrate the Covenant homeworld, and return with a captured Covenant Hierarch in an attempt to broker a truce and bring an end to the war.[8]

The complex was likely destroyed by the Covenant during the Fall of Reach, as it was reported under attack on the last day of the battle.