"Nothing can kill the Chief."
— A young John-117 refers to Mendez

Senior Chief Petty Officer Franklin Mendez (service number 22926-11908-FM)[1] is a retired UNSC Navy non-commissioned officer who was involved in the training of every supersoldier of both the SPARTAN-II and SPARTAN-III programs. His career is extensive and he has earned numerous medals and commendations fighting in the Insurrection and the Human-Covenant War.

Franklin Mendez was born on the human colony of Sigma Octanus IV on March 21, 2492. At the age of sixteen, he enlisted in the United Nations Space Command with the approval of his parents and he left for Reach to begin his training. In 2514, he transferred to Naval Special Weapons, where he participated in some of the most challenging engagements of the Insurrection occurring within the Eridanus system—though the specifics of his activities during these operations remain highly classified. Upon being promoted to Chief Petty Officer, Mendez became heavily involved in the NAVSPECWAR training cadre, where his skills became quickly recognized by the UNSC Navy's Office of Naval Intelligence.[1] By 2517, then-CPO Mendez was regarded as the Navy's best hand-to-hand combat and physical training drill instructor, in addition to having substantial combat experience.[4] 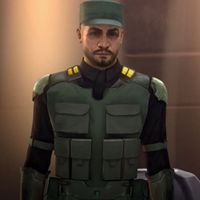 Mendez during the SPARTAN-II training.

Due to his skills, he was recruited to lead the training of the SPARTAN-II supersoldiers in 2516.[1] He was the Spartan-IIs' training leader during their first years on Reach from 2517 until 2525. He trained them in the aspects of combat as hard as any Marine when they were only at the age of six.[5] His military training was punctuated with in-class strategy sessions with AI Déjà.[6]

At the beginning of their training, CPO Mendez and his training instructors used electric batons to discipline trainees.[7] However, his trainers would occasionally use rifles with tranquilizer rounds to incapacitate the trainees (those who would eventually make up Gray Team) who attempted to escape. Eventually the Spartans, John-117 in particular, came to revere Mendez as a solid, unmovable force in their lives.[8] They had great respect for him, perhaps even to the extent of seeing him as a father figure, much as they regarded Dr. Catherine Halsey as a mother figure.

After the Spartan-IIs' training was completed, Mendez was reassigned to train the next class of Spartans.[9] John-117 never saw him again, though Mendez returned the quarter that Dr. Halsey had given John during their first meeting. He recalled that John broke a few of the trainers' fingers when they tried to take the coin from him.[10]

As the next class of the SPARTAN-II program was delayed by Dr. Halsey due to issues with viable candidates, ONI eventually diverted her funding to other projects and Mendez requested reassignment to active duty. Over the next six years, he fought the Covenant on five worlds, won two more Purple Hearts, and was promoted to Senior Chief Petty Officer. Mendez was then recruited by Colonel James Ackerson to assist Lieutenant Commander Kurt Ambrose, formerly Spartan Kurt-051, in administrating the SPARTAN-III program. He trained three SPARTAN-III companies at Camp Currahee on Onyx from 2531 until 2552. He was originally skeptical of the job, comparing the behavior of the trainees to that of the schoolchildren in the novel Lord of The Flies.[2]

While training the final batches of Gamma Company on October 31, 2552, Mendez and the other UNSC forces on Onyx came under attack by Forerunner Sentinels. He, along with SPARTAN-III Team Saber, Tom-B292, Lucy-B091, and Ambrose were virtually alone on the planet, and were forced to hide from Sentinels for several days. Eventually, Spartan-II Kelly-087 and Dr. Halsey arrived, followed shortly by Spartan-II Blue Team: Frederic-104, William-043, and Linda-058. Mendez assisted them in fighting their way to the core of Onyx, where he eventually evacuated to Shield World 006, held in a slipspace bubble in Onyx's core, along with the other survivors. Onyx, actually an artificial planetary shell covering the shield world, was then disintegrated by the Sentinels.[11] Mendez and Halsey inside Shield World 006.

At the funeral for the Spartans who had died on Onyx, Mendez read an excerpt from his favorite book: an account of the Rain Forest Wars called A Soldier's Tale: Rainforest Wars.[12] While inside the shield world, Mendez began to reflect upon his role in training the Spartans.[13] He also took note of Halsey's apparent discomfort with the Spartan-IIIs he had helped train, confronting the doctor about this on several occasions.[14]

After Mendez and the other survivors had reconnoitered the sphere for some time and established a base camp in a Forerunner city, Lucy-B091 discovered several Huragok which helped the human survivors contact the Office of Naval Intelligence ships outside the slipspace bubble and eventually bring the sphere into normal space.[15] Mendez and the others were then taken to a debriefing in HIGHCOM Facility Bravo-6 aboard the UNSC Port Stanley.[16] Mendez, along with the surviving Spartan-IIs, was present at the Voi Memorial unveiling ceremony on March 3, 2553.[17] Shortly after this, Mendez retired from UNSC service, a result of personal introspection of about his role in training child soldiers as well as pressure from the UNSC.[1]

Mendez was ultimately not comfortable with his retirement and by early 2554, he had been appointed as head of security for the Onyx United Research Project within Shield World 006, with the Sangheili Kasha 'Hilot as his second-in-command. While still nominally a civilian, Mendez had authority over the UNSC forces within the facility. Around April 2554, he welcomed Lucy-B091 and Tom-B292 to the shield world, the two Beta Company Spartans having been assigned under him as part of the project's security staff. Following an incident in which a UNSC soldier assaulted Kasha 'Hilot, Mendez dismissed the offender and his comrades, intending to talk with the facility's director Hugo Barton regarding the vetting standards for the facility's personnel.[18]

In 2558, ONI had a man claimed to be Mendez provide an interview regarding the Master Chief for journalist Benjamin Giraud in ONI's Boston headquarters. Like the other sources ONI had provided for Giraud, "Mendez" adhered to the sanitized public version of the Spartan-IIs' background, centered on glorifying John's heroism and omitting any mention of his age or life before his training. When Giraud attempted to approach the topic from a more critical angle, his interviewee rather unambiguously advised him not to press the issue so as to avoid turning the conversation "decidedly unpleasant".[19][Note 1]

Mendez is a strict, by-the-book military man and thus has a solid sense of duty and honor. He also rarely allows himself to display his emotions (for example, John-117 very rarely had seen him smile). When he heard of the destruction of the Alpha Company of Spartan-IIIs, he kept his face stony, holding his feelings to himself. His total need for discipline and order off-sets many of his new acquaintances, however those who know him well (namely the Spartan-IIs, particularly John-117 and Kurt Ambrose) have a respect and relationship with him that can be compared to that of the connection between father and child.

Mendez's stringent sense of military discipline extends to himself, and he is known to devote considerable attention to his physical fitness even with age. When he arrived to train Alpha Company, Lieutenant Commander Ambrose noted that Mendez had aged very well, that he had a trim chiseled body from "ironwood", with hair that was now silver, deep creases around his eyes and that a set of ragged scars that ran from brow to chin.[2] By 2552, Kurt still found Mendez to be surprisingly fit and agile, noting he moved like a soldier thirty years younger and wondered what kind of Spartan he would have made.[20]

He is known to enjoy Sweet William cigars.[21]

Mendez is a battle-hardened veteran who has won numerous decorations, including multiple Gold Stars, Silver Stars, Bronze Stars, three Purple Hearts,[22] and the Legion of Honor.

Mendez is portrayed by American actor Stacy Keach in Hunt the Truth.[23]