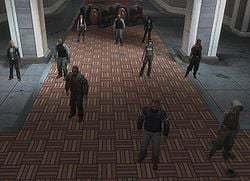 A group of civilians in New Alexandria.

A civilian, according to international humanitarian law, is a person who is not a member of their country's armed forces. The term is also often used colloquially to refer to people who are not members of a particular profession or occupation, especially by law enforcement agencies, which often use rank structures similar to those of military units. Often, the military's main purpose and occupation is to defend the civilians from invaders. However, many civilians, such as Dr. Catherine Halsey are involved with the military.

Several civilians are known to possess civilian identification numbers which functions similar to a UNSC Service Number. It is unknown whether all civilians are supplied such a number, or just those affiliated with certain industries or groups.

Civilians only play a side role in most of the Halo games, apart from a couple levels. Examples include the Voi factory workers in Halo 3,[3] the civilians on Arcadia in Halo Wars, and the civilians in New Alexandria, Reach in Halo: Reach. Another example is the meta-game Sadie's Story in Halo 3: ODST.[4]

Both civilians and civilian vehicles have an increased role and appearance in Halo: Reach. For example, in the level Exodus, the player can save civilians that are being slaughtered by Jiralhanae. Killing a civilian in Halo: Reach results in the immediate death of the player with the message, "You killed a civilian!" Alternatively on co-op, if the player kills two civilians after respawning, Noble Team will turn on the player and kill them instantly with one shot like the Arbiter and Sgt. Johnson from Halo 3. And, on the level Winter Contingency, the farmers encountered are re-skinned civilians.

Civilians appear in one level of Halo Wars, on the level Arcadia City. They are supposed to be escorted to the transport vehicles.

Civilians in Halo: Spartan Assault appear in a level where you have to evacuate the civilians through Spirits, while also having a limit of 10 civilian deaths.

In Halo 4, civilian scientists are encountered during the Raid on Ivanoff Station.

Civilians have a more prominent role in Halo 5: Guardians, during the Meridian story arc. The player can interact with them, gather intel in their camp, fight on their side, and discover more information on their lives.[5]