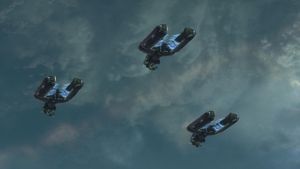 A trio squadron of Spirits deployed during the invasion of Reach.

Spirit is a name applied to a series of troop transports and logistical dropships employed by the Covenant and its remnants.

Spirits are uniquely identified by their distinctive tuning fork shape. Each "arm" is a troop deployment pod capable of hosting a number of soldiers, while the main cockpit is located at the rear of the ship, and a heavy plasma cannon is mounted below. The space between the two troop bays can be use to carry vehicles and other equipment. Some Spirits are equipped with gravity lifts to deploy troops without risking opening their troop bays.[1]

Spirit dropships are used by the Covenant against humanity.[5]