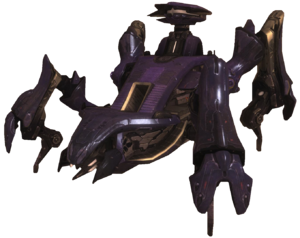 The Deutoros-pattern Scarab, one of the most common models.

"Scarab" is the name applied to a series of Covenant and Banished quadrupedal mining platforms.[1]

Scarabs are quadrupedal mining platforms that are part of a larger class of constructs known as Excavators. Out of nine tiers of Excavators they are classed tier-four on its scale. Scarabs are all fitted with a focus cannon for destroying targets or mining operations.[1] Scarabs are driven by hundreds of Rhulolekgolo, which function as a gestalt intelligence. For this reason, the Scarab was not formally considered a vehicle by the Covenant, but was employed as an ultra-heavy infantry unit directed by a single colony of Lekgolo. Nevertheless, Scarabs are generally deemed too valuable to operate without support, and are almost always accompanied by a robust escort.[2]

Two models of the Type-47, the default and most common, Scarab exist: the Deutoros and the Protos. Both models are extremely powerful, possessing potent armament and armor.[1]

During the Fall of Reach after discovering the Forerunner ruins under Menachite Mountain on Reach, the Covenant attempted to use several Scarabs to dig deep into the mountain's caverns. However, the walkers were destroyed by Zurdo-pattern Wraiths manned by Spartan-IIs.[5]

Battle of Havana and the Onyx Conflict[edit]

During the Battle of Havana on Earth, Spartan-II Blue Team destroyed a Scarab.[6] Another Scarab that had an onboard reactor was deployed during the Onyx Conflict by the Joyous Exultation Covenant.[7]

In September 2558, a Jiralhanae chieftain named Hekabe had access to Scarabs during his attack on Carrow.[8]

Like all known Excavators, the Scarab is named after an insect rather than a supernatural entity like most Covenant vehicles. However, scarabs do have significant supernatural relevance in Egyptian mythology.