This article is about the in-universe slipstream space transportation device. For the graphics engine, see Slipspace Engine.

A slipspace drive is a spacecraft propulsion system capable of making transitions to and from slipstream space and by extension allowing faster-than-light interstellar travel. The device functions by creating ruptures between normal space and slipspace. The nonstandard physics of slipspace allow it to be used as a shortcut realm, facilitating interstellar travel between distant regions in reasonable time.[2] 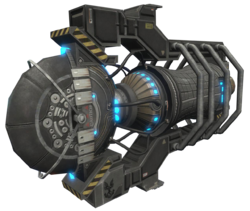 Humans created the Shaw-Fujikawa Translight Engine. The Shaw-Fujikawa Translight Engine functions by creating ruptures, referred to in some sources as wormholes, between normal space and an alternate plane known as slipspace (also known as slipstream space and Shaw-Fujikawa space).[3] The engine creates ruptures by using high-power cyclic particle accelerators to generate microscopic black holes. Because of their low mass, Hawking radiation gives them a lifetime of around a nanosecond (or potentially a little longer than a whole second)[4] before they evaporate into useless thermal energy. In that nanosecond, the engine manipulates them into forming a coherent rupture between normal space and the slipstream.[5] A major component of the drive is a set of "slipspace capacitors" which have to be charged before a jump.[6][7]

The Shaw-Fujikawa Translight Engine generates a quantum field, which prevents the ship and its occupants from being directly exposed to the eleven-dimensional space-time of slipspace, instead translating the ship's presence to the foreign physics of the Slipstream and "squeezing" it through the higher dimensions.[8] Maintaining the quantum field requires an enormous amount of constant calculations, with larger vessels requiring significantly more such calculations than smaller ones. For example, the slipspace translations for a Phoenix-class colony ship require 4.3 quadrillion calculations of the quantum field per second.[9]

A human slipspace drive does not actually "accelerate" a spacecraft through slipstream space; this is performed by the ship's conventional reaction thrusters. Thus, ships with more powerful conventional engines are also faster within the slipstream.[10] When active, a Shaw-Fujikawa engine emits alpha (helium nuclei) and beta particles (fast electrons).[11] The coordination and plotting of slipspace jumps, referred to as astrogation, requires an enormous amount of calculations which require a navigation computer or an AI to successfully conduct.[12] However, the basic jump parameters can be calculated by a human.[13]

The elements Selenium and Technetium are used to manufacture Shaw-Fujikawa Translight Engines.[14] Despite being considered inferior to Covenant slipspace drives, their simplistic and straightforward technical architecture and substantial room for improvements are considered useful properties to both the UNSC and Kig-Yar pirate clans.[15] 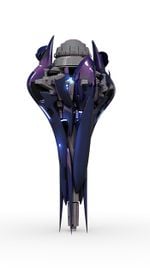 The Covenant and its remnants created Borers. Being more technologically advanced than humanity, the Covenant have numerous advantages in slipspace propulsion systems. Whilst the human Shaw-Fujikawa engine is said to “punch” a hole between realms using brute force, Covenant engines instead take a small rupture and delicately enlarge it with surgical precision. This allows the latter to execute far more accurate slips.[16] Covenant slipspace drives are often referred to as "jump drives".[17] In addition to their more powerful thruster engines, it has been theorized by the UNSC that Covenant drives generate several "microjumps" within a single slipspace transition to measure the dilation involved in a jump, allowing them to reach their destinations faster.[18]

Covenant drives are generally more flexible and powerful than those of humans. They have thrice been seen to execute in-atmosphere slipspace transitions[19][20] (although the first time the drive in question was controlled by a human AI). In addition, Covenant drives can execute successful slips even if underpowered.

Covenant slipspace drives can also be refitted to human ships, as seen during OPERATION: FIRST STRIKE, where the UNSC fitted Ascendant Justice's slipspace drive to the UNSC Gettysburg to escape Unyielding Hierophant and reach Earth faster. 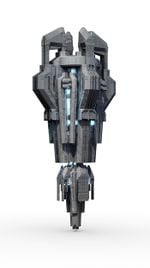 Forerunner understanding of the mechanics of slipspace far exceeded that of the UNSC or the Covenant. They used small crystals embedded in their slipspace drives to manipulate slipspace,[21] allowing smoother transitions.[22] They had a superior grasp of reconciliation, the ability to correct or otherwise manipulate the causal effects of slipspace travel.[23] This was useful when carrying out large-scale coordinated military campaigns or simply moving across enormous distances.

Forerunner ships are also extremely fast, as seen when the Mantle's Approach was able to travel from the vicinity Installation 03 to Earth in a matter of minutes. Forerunner ships rely on their energy shields to keep them safe during the journey, unlike UNSC ships, which rely on just their armor.[24]