The UNSC Army is a branch of the UNSC Armed Forces, and is primarily responsible for land-based military operations under the direction of the Unified Ground Command alongside the UNSC Marine Corps and other land-based forces. Unlike the Marine Corps, which is typically deployed in expeditionary operations across the galaxy in conjunction with the UNSC Navy, the Army is primarily implemented in ground combat operations and garrison duties, serving as a major part of the UNSC Defense Force alongside the UNSC Air Force.[1]

The UNSC Army was formed by at least the latter years of the Domus Diaspora.[2]

The UNSC Army operated Insurrection, at least until the early years of Operation: TREBUCHET.[2]

Army forces mounted an unsuccessful defense of the planet Alluvion during the Covenant's invasion in late 2542, ending when the Covenant glassed the planet.[3] In May 2545, the Army's 53rd Armored Division, commanded by Colonel Akono Menteith, defended the human colony of Actium during the Covenant's invasion of the planet. At the end of the campaign, 12,000 soldiers of the 53rd took part in a massive assault on a trio of Covenant staging grounds. Though these attacks succeeded, the 53rd was ultimately annihilated and Actium was subsequently glassed.[4]

Between July 23 and August 30, 2552, thousands of Army personnel defended the fortess world Reach during the Covenant's invasion of the planet.[6] Trooper fireteams dispatched by Colonel Urban Holland initiated first contact with the Covenant at the UNSC communications relay at Visegrád on the night of July 23.[7][8][9] On July 26, Army troopers stationed near the Office of Naval Intelligence's Sword Base, with crucial assistance from SPARTAN Noble Team, defended against Covenant attackers.[10] Following these early engagements, Army personnel continued to combat the Covenant's advance invasion force for several weeks. On August 12, three Army brigades served as part of a large joint UNSC force during the battle for the Viery Territory. Part of this force was used to eliminate a series of Covenant deployment spires during the Battle at Szurdok Ridge.[11] Two days later, UNSC Army pilots joined Noble Six in Operation: UPPER CUT, flying FSS-1000 Sabre fighters to help disable and board the Ardent Prayer.[12] Shortly after, a much larger Covenant fleet arrived at Reach.[13] By August 23, Army forces had attempted to break the Covenant's siege of New Alexandria for some time. With the assistance of SPARTAN-B312, they were able to evacuate most of the civilians and military personnel from the city, though some stragglers remained.[14][15] On August 29 and 30, the few Army personnel remaining on the Eposz continent attempted to rally at the area's ship-breaking facilities, which served as the only evacuation area left on the continent. There, they engaged in a large-scale battle against the Covenant, who had arrived on Reach in force and had begun glassing the area. Most of the convoys on the way to the evacuation zone were destroyed by the Covenant.[16]

During the Battle of Earth on October 20, 2552, an Army convoy was sent to New Mombasa to aid the Marines and civilians stationed there; the unit was destroyed in the attempt.[18] Later, during the Battle of Mare Erythraeum on Mars, Colonel James Ackerson led Army personnel against Covenant forces led by the Jiralhanae commander Lepidus.[19]

Curiously, the Army was the only military branch in the UNSC not invited to the Hillside memorial ceremony at the end of the Human-Covenant War.[20]

The UNSC Army has continued to expand its role in the defense of humanity's interests in the postwar era, and served with distinction against the resurgent Covenant remnants in the 2550s. On an undetermined date, the UNSC Army aided the Marine Corps in combating Covenant forces occupying the colony world of Draetheus V, playing a part in the UNSC's eventual victory but sustaining huge losses in the process.

In 2557, Army personnel were deployed to Installation 03 to secure a Composer's excavation and extraction by UNSC Infinity.[21]

In February 2558, Army personnel attached to the UNSC Infinity were deployed to the Forerunner shield world known as Requiem. Along with Navy, Marine Corps, and Spartan assets, they were to secure beachheads and to prevent the Covenant from establishing bases near the UNSC's forward line.[22]

Like the UNSC Marine Corps, the UNSC Army is organized under the Unified Ground Command. The branch maintains a UNSC Army Corps of Engineers.[23]

The majority of the UNSC Army's infantry force is made up of riflemen, who are often supported by heavy weapon infantry. Army Fire Support Teams are specialized units which assist standard infantry and are allocated as part of their battalion's offensive or defensive plans, providing overwatch and combating heavy enemy forces.[24]

The Army's special operations fall under the authority of UNICOM's Special Warfare Command (SPECWARCOM). While most Spartans have been historically operated by Naval Special Weapons, some Spartan units are known to have served within UNICOM's special forces. The most notable of these units is NOBLE Team, which served under Special Warfare Group Three.[6][25][26] The UNSC Army also operates Ranger units who serve as advance scouts on occupied human worlds, conducting counterinsurgency missions and organizing resistance groups.[27] Army Pathfinder units are also known to exist, and are known to utilise the Torchbearer VISR and the FC-I configuration of Air Assault helmet.[28][29]

The UNSC Army maintains an unknown number of airborne infantry units[30][31] such as the 6th Airborne Division.[32]

The Army has combat divers between their ranks. By 2558, these divers began to adopt MAKO-class Mjolnir's helmet.[33] 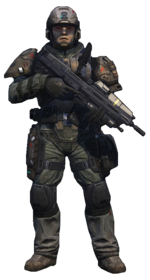 The personnel of the UNSC Army are described as well-trained, disciplined, and motivated men and women.[24] Service people hold ranks, which are divided between officers and enlisted. The rank structure of the UNSC Army is based around that of the United States Army. For a list of ranks within the Army, see UNSC rank structure.

UNSC Army ground forces are led by their commanding officers. Often seasoned and battle-hardened veterans, UNSC officers are trained to maintain a calm demeanor, inspire their men, and deliver a sound tactical perspective while on the battlefield. They also ensure that combined-arms operations are carried out efficiently and safely by controlling the unit's shard of the UNSC battle network.[24]

The core fighting units of the Army consist of riflemen, who are equipped with a wide variety of small arms. When available, they can also be reinforced with heavy weapon units.[24]

Army Fire Support Teams are allocated as part of their battalions offensive or defensive strategies. In defensive operations, they provide overwatching support-by-fire, while on the offense they engage enemy vehicles and heavy infantry, as such, their loadout is usually tailored to their mission, terrain, and expected enemy composition.[24]

Along with their Marine counterparts, UNSC Army infantry played a pivotal role in humanity's fight against the Covenant hegemony,[24] engaging the enemy in small arms combat, and often in close proximity.[14] Their tenacity during combat was one of the major factors that decided humanity's continued survival against the overwhelming technological and numerical advantage of the Covenant.[24]

Several armor variants and weapons used by the UNSC Army.

The Army and Marine Corps share many matériel assets, though some of their weapons differ. The Army fields the MA37 Individual Combat Weapon System instead of the MA5B and MA5C assault rifles as the standard assault weapon. By 2557, this would be ultimately replaced by the MA5D assault rifle when it was made the UNSC's standard-issue assault rifle. UNSC Army MA5Ds are typically fitted with recon sights.[36] The Army prefers to use the M392 Designated Marksman Rifle for medium-range suppression, which has been replaced in all other branches of service by the BR55 battle rifle. DMRs were commonly used by Army scouts and squad marksmen since 2512, and still remain in service with the branch's sharpshooters due to the weapon's reliability and use of standard 7.62×51mm M118 FMJ-AP.[37] However, by 2558, the BR85 battle rifle equipped with the COG sight was undergoing final Army SPECWARCOM trials.[38]

In addition, the M6G pistol is the standard sidearm before being superceded by the M6H magnum by 2555,[39] while the M45 Tactical Shotgun is used for close-quarters combat. The Army is the only branch of the UNSC to make use of the M6J carbine variant of the M6 series.[40][41][42] The M247H Heavy Machine Gun serves as a heavy suppression weapon.[6]

Snipers operate the SRS99-AM sniper rifle for long-range suppression and anti-matériel operations. The M319 grenade launcher is used for medium-range suppression and anti-fortification duties. The Army also operates the M9 High-Explosive Dual-Purpose Grenade. Anti-armor fire is provided by the M41 rocket launcher and the Model 6 Grindell/Galilean Nonlinear Rifle directed energy weapon.[6] Around October 2558, the M41 SPNKR was phased out in favour of the cheaper, lighter M57 Pilum.[43]

The Army's standard vehicle is the M12 Force Application Vehicle, which is used for armored patrols and personnel mobility. The M12 FAV is produced in several variants. The most common of these variants is the M12 Light Reconnaissance Vehicle, which is armed with an M41 Light Anti-Aircraft Gun. Light anti-vehicle support is provided by the M12R Light Anti-Armor Vehicle, which features an M79 Multiple Launch Rocket System. The M247R and Urban M290 Mongooses,[44] which are commonly used for scouting and light target interdiction. Army scouts also employ the M290-M Gungoose, in the Urban and Woodland variants.[45][46] The M650 Mastodon was an armored personnel carrier used by the Army.[47][48]

For heavy engagements, the Army operates the M808 Main Battle Tank, which is armed with an M512 Smooth Bore High Velocity Cannon and an M247T Medium Machine Gun, though by 2558 the Army was utilising the M820 Scorpion, with units expected to fight insurrection forces in urban environments provided the "Urban" tactical upgrade for their tanks.[49] The Army retained M850 Grizzly units for planetary defense, following the Human-Covenant War.[50] From between the latter years of the Domus Diaspora and the early years of Operation: TREBUCHET, the Army operated the M700 Viper.[2]

The UH-144 Falcon is the iconic aerial vehicle of the Army, and is used to transport both regular infantry as well as Spartans across the battlefield. It can hold up to six occupants total, and is armed with various weapons, including machine gun turrets, grenade launcher turrets, and a chin mounted turret for the pilot's use. There are also variants that have no armaments and are completely dedicated as troop transports.[51] The AV-19 SkyHawk was also used by the Army.[52] Following the dissolution of the CMA, the JOV-99 Kestrel was originally earmarked for UNSC Army service, but lobbying by Misriah Armory caused those to be replaced by the AV-49 Wasp.[2] As well, some MV-29 Wyverns were given to some Army units.[53]

The Army also makes use of the Mantis, with the Army and Marine Corps upgrading their Mantis units by themselves.[54]