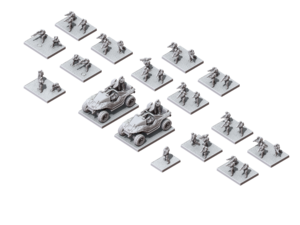 A Platoon is a military unit used by the UNSC Army, the UNSC Marine Corps and the Colonial Militia to organize their combat forces.

A platoon is typically composed of three 13 man squads, for a total of thirty-nine men not including the platoon commander. [1] Platoons are usually led by a Second Lieutenant, with a "platoon sergeant" acting as the assistant leader of the unit, typically a role fulfilled by a Sergeant or Staff Sergeant.[1][2] ODST platoons may be composed of 40 men instead.[3]

Four platoons compose a Company. Companies typically employ three infantry platoons,[1] bearing small arms such as rifles, shotguns and grenade launchers, though can be reinforced with heavy machine guns and rocket launchers.[4] The fourth platoon in the company is typically a heavy weapons platoon, though these numbers may change depending on the unit type and mission. "T Companies", for example, eschew this model and mix heavy weapons personnel into each platoon so all platoons instead have one weapons squad alongside their other infantry.[1]

The starter box set of Halo: Ground Command came with one full platoon of UNSC Army infantry, alongside a combat Lance of Covenant troops.[5]