To be clear, Divisions, Regiments, Battalions, and corresponding air and logistics units are not permanently assigned to marine expeditionary forces, brigades, and units, but rather formed for specific task forces for a mission. For example, say the UNSC wanted to establish a base on a moon or asteroid but a force or brigade was too large for the job. It would detach an infantry battalion, tank platoon, etc. from its mother infantry division and assign these units to the MEU HQ. After the mission was over they could possibly remain with the MEU or it could be disbanded. Another possibility would be to rotate units out of the MEU back to their parent unit after some time and replace it with a fresh unit. The flexibility and adaptability of the system clearly shown here helps to explain why it has survived for centuries.

Current Halo canon focuses heavily on small unit interactions, with units at any strength higher than a battalion being only occasionally mentioned and never elaborated upon. This has caused a lack of information regarding the specifics of larger UNSC Marine commands. Small units structure is often referenced indirectly. The below chart shows unit strength and specifics that can be applied to all (as of yet ) known units. 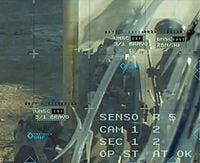 An ambiguous set of IFF tags identifying Marines from 3/1 Bravo and an ODST from 2BN/3U.

The above system seems to fit most stated units of the UNSC armed forces, but not all unit designations are clear. Specifically, the use of unit abbreviation codes make it particularly difficult to properly identify units. An example of this is the unit 3/1 Bravo, which could possibly stand for "Bravo Company, 1st Battalion, 3rd Marine Regiment", however, "Fireteam Bravo, First Squad, Third Platoon" is just as reasonable a translation of the code. More complicated codes arose in Halo 3, such as S4/BAG/2/5 and E2-BAG/1/7, which have even more variables.

The only time a unit abbreviation code is translated is page 111 of Halo: Contact Harvest, where M-EDF 9/21/1 is translated as 9th Marine Expeditionary Force, 21st Marine Division, 1st Battalion. This adds further mystery to the scheme, as it apparently skips over the Regimental command and implies that the Battalion is directly subordinate to the Division level headquarters, a fact that no other source has ever stated and does not make sense according to standard military organization.

Unit designations are also deeply convoluted, due to the great use of acronyms which are not used in modern militaries and have not yet been directly spelled out. References have been made to "BAG" units (as seen above) where no modern military designates any type of combat unit with the acronym "BAG", and the many possible meanings of the acronym make it unclear what a "BAG" unit is. Other anomalies include 2BN/3U, where "2BN" is short for 2nd Battalion, but what "3U" stands for is unclear, and only assumed to be "Third Unit." The mentioned 22nd Tactical, (having received no further designation, and could be of virtually any size) and the 105th Drop Jet Platoon (going against the established scheme of not providing permanent designations for Platoons) are even further examples of the confusion caused by clashing sources of information.

The UNSC Navy command structure has received even less attention than the UNSC Marine Corps. Halo: Official Spartan Field Manual provided more information, in addition Halo: Warfleet – An Illustrated Guide to the Spacecraft of Halo provided crew numbers for certain ships. There have also been visual depictions of the number of ships within fleets and the rank of fleet leaders in comics, games, and films; and written depictions in books.