Sandtrap is a multiplayer map featured in Halo 3 and Halo Online. The map is set in a vast desert with rolling sand dunes and some enigmatic half-buried structures.

At some point, likely during the Battle of Installation 00, the area came under the occupation of the Jiralhanae, who fortified the site with landmines and at least one Ru'swum-pattern Phantom. However, the brutes were later driven from the region and UNSC forces deployed from UNSC Aegis Fate took control of the area, utilizing D96-TCE Albatross 03 and two M313 Elephants, named "Behemoth" and "Leviathan". An analysis of Sandtrap's atmosphere by the UNSC showed its atmospheric compositon to be the following:[2]

and surface composition to be Carbon, Silicon, Sodium, Titanium, Nitrogen, Zinc, Calcium, and other trace elements.[2][Note 2] In addition, the composition of the structures is presently unknown, and life signs in the region are minimal.[2]

The structures on Sandtrap are symmetrical along the map's long axis, with two different bases at either end - one by the UNSC encampment by the Albatross and another by the Phantom. Each base has access to an Elephant, a Chopper, a Mongoose and two Warthogs. However, one side of the map's symmetry is fully unearthed by the excavations while the other largely still buried in the sand, adding some slight asymmetry to the map's layout. The central "spine" of the map is a two-floor triangular structure running through the middle of the map, acting as a ramp for vehicles on top and having a small infantry corridor running through the structure. One side of the spine has two small buildings with gravity lifts connected by bridges, and a vehicle-access underpass beneath the bridges.

The base near the Albatross is fairly open, while the base on the other side of the map is a multi-level structure with the bottom floor comparable to a crypt, while the top floor resembles the top of the aforementioned central spine. The downed Phantom off to the side of the map has a Banshee next to it. Sandtrap features odd Forerunner constructs (called Shrine Defenders in the Halo 3 files) and is encircled with a "minefield" that features vertically launching mines to prevent players from venturing beyond its boundaries. The outer skybox of the map features a full model of a Charon-class light frigate, the UNSC Aegis Fate.

The map has a heavy emphasis on vehicular combat. All the Forgeable vehicles available at the time in the game are on this map - for example, the "bases" are a pair of Elephants at opposite ends of the recently unearthed Forerunner ruins. There are also some very interesting sniper spots. For example, if you are inside the crashed Phantom, it will be hard for other players to see you and the location gives you a very interesting view to take down some unsuspecting players. Also, a large hill gives you a good view over the field from overhead.

The rocket launcher spawn on the map. 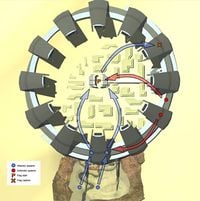 Sandtrap, known in development as "Shrine", started development in 2005. Developer Justin Hayward's goals for the map initially were to make "the ultimate warthog map" and to make the map friendly for both infantry and vehicles. The initial concept was extremely large, but scaled down during development, with the initial idea intending to be an a sequential objective map (similar to the Warfare mode previously-cut from Halo: Combat Evolved and Halo 2 and the Invasion and Warzone Assault modes later featured in Halo: Reach and Halo 5: Guardians, respectively), where the attacking team would assault a section of the map that would lead into the "bowl" that would later become the setting of Sandtrap. This initial opening section was also massive, and was "a second Sandtrap right next to the one you know.”.[1]

At the time of the map's conception, the only solid detail of the map's setting was to be set in miscellaneous Forerunner structures, with the official design documentation later adding "Deep within the boundless dune-fields of Waypoint, the high tech Forerunner structure encases the remnants of even older Forerunner stonework.". Hayward chose sandstone as the map's primary structural element as it provided a more "human scale" element, with the intent of being more mysterious. There was internal debate at Bungie with some developers opposing the idea of using sandstone Forerunner structures, while Hayward wanted to use the external metal guardian towers to feel like they were containing something on the map.[1] Originally, there would have been a dozen or so towers around the map.

Two notes on Sandtrap's concept sheet in early development were “Crater at center accessible by tunnels that radiate out from the pit” and “Drivable beach area extends all the way around the island.” - although these concepts would make their way onto the map, it was decided that the map was too large for capture and hold-style progression, as at the time the team was still trying to figure out what Halo 3s multiplayer would be. Hayworth began 3D blockouts to ascertain a sense of scale, and realised the map fit a good spot currently absent in the sandbox; a large map with an asymmetric objective and layout.[1]

At this time, the game's sandbox of weapons and vehicles (including the Hornet, Spartan Laser and missile pod) was beginning to take shape, which fit well with the need to make the vehicle offerings on the map a bit less dominant. The addition of larger vehicle routes, however, was done to allow light vehicles to escape grenades and regular gunfire. Hayworth then left to work on Snowbound while designer Chris Carney jumped on Sandtrap and began architecting and layout sketches.[1]

The landmines littering the perimeter originated as laser beams fired from the guardian towers similar to the ones later implemented on Sandbox. During development, the team implemented the landmines as a test of a separate system and did intend on reversing the change back to the lasers, but were unable to do so before the game shipped.[1]

During the later development of Halo 4, Sandtrap was reused by 343 Industries to test out the game's vehicle sandbox.[3] 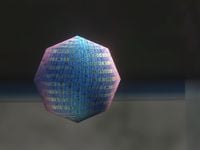