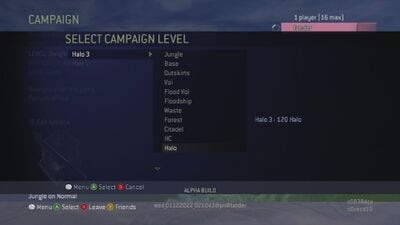 A look at the campaign level selection in the Halo 3 Alpha, showcasing the original selection of intended missions with their in-development names.

During the development of Halo 3, a number of levels were cut or changed dramatically.

A level named "Tsavo Township" was referenced by Vic DeLeon briefly on Twitter, as a map he still had some images of.[1] This may be the map DeLeon referred to as an "Old Mombasa" test in another tweet.[2] It is unclear whether this map is an internal codename for a final shipped level such as The Storm, or an internal prototype that never made ship.

Flood Ship, also known as 060_floodship was a cut level set after Floodgate and taking place in the crashed Flood ship in Voi. The original objective of the level was to detonate the ship's reactor and escape. However, due to time constraints and other development issues, much of this was cut and reworked into the final version of Cortana.[3][4][5][6] Though it was present as a selectable level in the Halo 3 Alpha. More detailed information about the level can be found here and here.

In the end, in the idea of the playable Floodship space was conjoined onto Floodgate; Objects used in that section of the level can still be found in the 060_floodship folder in the Halo 3 Mod Tools. The original objective of the level is still mentioned in the final version of Floodgate despite there being a different one: "Find the crashed Flood ship; overload its engine core." as stated by Miranda Keyes.

Guardian Forest, also known as 080_forest was a cut level[7] set either between The Ark and The Covenant[8] or after The Covenant but before Cortana. The level was set in a large forest on Installation 00 and was to feature a new enemy, the Guardian.[9][10]

alpine, known as 090_alpine in the game files, is a cut campaign mission viewable in the Halo 3 game files due to the release of the Halo 3 Mod Tools. The folder itself contains no files of particular note, but the name itself reveals several details. The name alpine describes the kind of terrain the mission was intended to have - perfectly matching the landscapes found in the final game level of The Covenant - itself known as 100_citadel. The 100 designation clashes with another cut level, 100_forecity, due to the fact that 090_alpine and 100_forecity were combined to become 100_citadel.[11] This process was done fairly early on in development.[12]

When the aforementioned Guardian Forest level was cut, the planned Hornet sections were transplanted into The Covenant[9][10], indicating that this major restructuring likely occurred around the same time as - or because - of the dropping of Guardian Forest.

The level in the Mod Tools files referred to as 100_forecity likely corresponds with The Lost City, a map developed by Paul Russel for the purposes of experimenting with Forerunner architectural design. Although described by Russell and Vic DeLeon as a map primarily used to demonstrate new technologies for the Xbox 360 and new engine, designer Dan Miller is also on record as mentioning that he was assigned as a designer on this level - indicating it was at one point intended to be a playable level space.[13]

High Charity, also known as 110_hc_old, comprises the original layout of the mission Cortana, prior to the level being cut-down and replaced with portions of the map designed for Flood Ship.[3][4]

A number of multiplayer maps were considered for inclusion in Halo 3, including several that did not make the final cut. Notably, the maps "Wall of Cotton" and "Shaft" do not match any known development names for released multiplayer maps, nor fit the theme of any released in the final game. The document also shows remakes of the maps Hang 'Em High, Blood Gulch and Lockout as considered for inclusion - the latter of which eventually making its way into the game as Blackout.[14]

In the Halo 3 component of Halo: The Master Chief Collection, a number of seemingly-leftover .mapinfo files were removed from the game at some point during the flighting process. These maps contain the aforementioned "shaft", alongside some presently-unknown maps referenced as "volcano", "pump_haus", "landslide", "damn" and "beachhead". The files also reference a map named "warthog_inc", discussed in-detail further down this page.

Little is known of "Gauntlet" - the map was used in development to test a variety of objective-based gamemodes that ultimately never appeared in the final release of Halo 3. Interestingly, concept sketches for the map layout suggest the idea of Halo 3 including several classes including "Assault", "Rifleman" and "Warthog Dude".[15]

The map internally named "Monkey Mountain" was built for the Capture the Flag gametype, and consisted of the attacking team assaulting up a hill (similarly to High Ground) to capture the flag. However, the map had a unique twist in that the attackers could then drop the flag off a cliff next to the base into a river below, at which point a boat could drive the flag back home, similarly to the design of Halo 2's map Relic. The map was ultimately scrapped due to the river mechanic not working well enough to justify including the map. Monkey Mountain was also to include a rideable elevator of some kind.[15]

Design documentation shared by Max Hoberman shows Monkey Mountain as intended for 8-12+ players, and was in development by the time Halo 3 ended pre-production.[14]

The map internally codenamed "Warthog Inc" was focused on the Territories gametype, and one of the last maps cut from Halo 3. The map was to be set in a location where the titular Warthog was built and tested, and was reported by Chris Carney as "playing really well"; consisting of a collection of five 1-2 storey buildings each containing a territory zone. The map also contained a Warthog "test track" which allowed the player to use vehicles in a medium-sized map, but made movement predictable as to keep them balanced versus infantry. The map was ultimately scrapped as it never hit an "amazing" level of gameplay.[15]

Interestingly, Warthog Inc was also included (albeit unplayable) in the files of the Halo 3 beta. Additionally, it seems that Warthog Inc's early blockout geometry can be seen being playtested by Bungie staff in the ViDoc Is Quisnam Protero Damno!. In one shot, the level is seen selected in the custom game lobby, and the geometry shown matches the level icon found in the Halo 3 Delta build.[16] Design documentation shared by Hoberman shows Warthog Inc as intended for 4-8+ players, and was in development by the time Halo 3 ended pre-production.[14]

The Lost City was a visual look-development level.[17] The level was based around the idea of a Forerunner city, composed of a single building.[18] The space had grown immense in size.[17] An art pass was done on the level in 2005 before it was cut.[19]