Lockout is an asymmetrical Halo 2 multiplayer map. It was remade as Blackout in Halo 3, Shutout using Forge in Halo 4, and as Lockdown in Halo 2: Anniversary.

Although the UNSC In Amber Clad was destroyed during Delta Halo’s Flood outbreak, the frigate's data nodes had already transmitted extensive details of various sites on the ring's surface to the Master Chief. One of these – a derelict structure fixed to the ledge of a distant mountain - was the source of considerable scientific debate after his return. Subsequent analysis indicates it may have been a Forerunner research site used to research the parasite, but the findings remain inconclusive.[1]

Lockout consists of three levels. The focus of the map is a central square platform, with four buildings surrounding the platform. Through the use of connecting ramps and bridges, two buildings on each end of the platform connect together to form a rough figure eight shape. Each building, including the central platform, contains three levels, interconnected through gravity lifts and ramps.

Most of the fighting occurs around the center of the map, either the upper or lower level. A small room exists on the bottom floor with small, damaged, green-glowing chambers and at the end there is a gravity lift back to the upper deck near the center. The towers abutting the center arena are used to get a better view of the upper level, as well as surprise attacks for people beneath them.

Lockout is, overall, a very straightforward map hence its popularity among MLG players, and the map default weapons are generally close-quarters minded with longer range weapons acting as power selections, if used correctly. 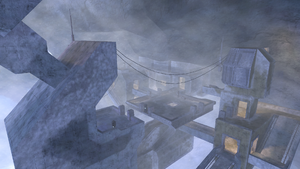 An overview of Lockout. 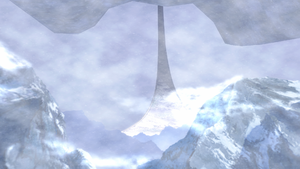 The view of Installation 05 from Lockout.