This article is about the Halo 2 campaign level. For other uses of "Regret", see Regret.

Regret is the ninth campaign level of Halo 2. Starting from the end of the previous level Delta Halo, the player travels on floating gondolas, in underwater elevators, and through various temple corridors to reach the temple holding the Prophet of Regret.

Master Chief starts to walk past a hologram of Prophet of Regret chanting a sermon.

Master Chief puts Cortana in the holo-projector, her avatar appears.

Cortana snaps her fingers, and the hologram starts speaking in English.

Cortana snaps her fingers again, and the hologram freezes.

The view changes into In Amber Clad's bridge, where Keyes studies a hologram of the Index.

Commander Keyes changes the hologram to the Library.

The view changes back to the Chief and Cortana.

Master Chief puts Cortana back in his armor.

A swarm of Yanme'e descend upon the Chief, shortly followed by a pair of Sangheili. After defeating them, he and two Marines proceed outside, where the ruins are infested with Covenant forces.

The Chief and his team engage the Covenant forces, which include a significant number of Kig-Yar Snipers.

If the player lingers:

Eventually they are able to proceed to a large platform, just in time to see an anti-gravity gondola being activated and speeds away.

A Pelican dropship swoops down and releases several Ordnance pods for the team, as well as replacement Marines if the Chief happened to lose any.

The gondola docks with the platform, and its Covenant passengers, led by a pair of Sangheili attack the team. After all hostiles are eliminated by the Chief:

If either Private Chips Dubbo and/or Sergeant Stacker are with the Chief.

If the player waits around the Gondola.

The Chief activates the Gondola.

The Chief and the two Marines are attacked by a swarm of Yanme'e as they cross the lake. The trio eliminates them.

Another gondola stops beside the UNSC teams one, sent from the far structure. A pair of Sangheili open fire on the humans while a small group of Yanme'e attempt to board. The Chief kills all Covenant present and the gondola moves on. The UNSC gondola reaches the far structure and the team are forced to deal with several Kig-Yar Snipers and Shade turrets. Moving inside, the team eliminate a large group of Kig-Yar and Yanme'e surrounding an elevator shaft.

The underwater elevator comes up, ferrying a trio of Kig-Yar. The UNSC take advantage of the closed-in nature of the elevator and kill the Covenant troops.

If the player waits around for too long:

As the Chief and the Marines journey underwater in the elevator, and peer around the murky depths.

The team enter another structure, clearing out a group of Unggoy in a submerged corridor before entering a large chamber. A protracted battle ensues, in which the team face Sangheili Honor Guardsmen, Kig-Yar Snipers, Yanme'e and a Mgalekgolo pair. Upon successfully clearing the chamber, the Chief and any surviving Marines gaze upon a massive hologram of the Prophet of Regret.

If the player stares at Regret's hologram for long enough:

The team leave the chamber and pass through another submerged corridor, eliminating several cloaked Sangheili and Unggoy. The Chief and surviving Marines reach another elevator and go underwater again.

After emerging from the elevator and killing a pair of Sangheili Honor Guardsmen and several dozing Unggoy, the team find another hologram of the Prophet of Regret spouting religious rhetoric.

The Chief and his team exit the structure, engaging a mixed array of Sangheili, Kig-Yar and Yanme'e. Eventually the UNSC forces clear the area and secure a landing zone.

The Pelican drops off more weapon pods and some Marines.

The Chief and the Marines clear the next nearby outdoor structure area of Covenant, along with another Phantom's troop complement. Eventually they encounter another gondola which is lightly guarded.

Note: Only this dialogue will occur if Chips Dubbo and a male Marine that is not Stacker/Banks are present.

The Chief starts the gondola. Two Banshees emerge from the mountain behind them.

The Chief fights off the Banshees, as well as another gondola containing several Sangheili Rangers and high-ranking Unggoy wielding fuel rod guns (only on higher difficulties). As the gondola nears Regret's temple, a mass of Unggoy and Kig-Yar rush to defensive positions, manning several nearby Shade turrets. The team manages to eliminate all Covenant forces as the gondola docks with the temple.

The Master Chief walks off the gondola and looks around, then up. There are an uncountable number of Slipspace ruptures, and hundreds of Covenant ships come out of Slipspace, followed by High Charity.

Sorry, Were You in the Middle of Something?[edit]

The Chief enters the main room. The Prophet of Regret sits on his Gravity throne at the far end of the room.

After sighting the Chief, the Prophet talks to him.

If Regret kills the player:

If the player waits around:

Despite Regret and his Honor Guards' best efforts to stop the Chief, the Spartan manages to defeat the Prophet by jumping onto his throne and repeatedly punching him in the head, killing him. The Prophet loses control of his throne which crashes, overloads and explodes. Any remaining Covenant in the area start to flee. 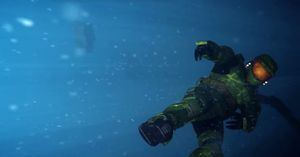 The Gravemind drags the unconscious Master Chief into the watery depths of Halo.

The Master Chief is standing outside the temple (running outside in the Anniversary version at a distant rumbling sound). A Covenant ship is directly overhead. An energy projector from a nearby Covenant ship hits the temple and begins destroying it The Chief turns, runs around a corner, and jumps a ledge, landing about several feet below where he was. He runs the entire length of the temple, as the temple starts exploding. He barely makes it off, and is flung into the water, where he slowly begins to sink with other bits of stone from the temple.

As the Chief continues to sink, a pair of tentacles (in the Anniversary version just one tentacle) come/comes up from the bottom. A deep, disembodied voice speaks out.

The tentacle(s) wrap(s) around the Master Chief, dragging him down.

The HI BEN easter egg found on this level.