Having retaken Alpha Base, Sergeant John Forge observes the Covenant activity outside of the Relic. In particular, Forge observes Arbiter Ripa 'Moramee who commands his troops to open the structure despite the dangers of the Flood being inside. On the UNSC Spirit of Fire, Professor Ellen Anders insists that she must see the structure for herself to determine its purpose and Captain James Cutter agrees to send her on the condition that Anders will be evacuated at the first sign of danger. At the same time, the Arbiter reports to the Prophet of Regret on the success of their mission. Though pleased by what the Relic has revealed, the Prophet of Regret, to the Arbiter's shock, orders that the Covenant must destroy the holy Relic to keep it out of human hands to protect what the Covenant has learned there. The Arbiter concedes to the Prophet's wishes and begins having his troops plant charges.

Before assaulting the Covenant position, Forge has to rebuild Alpha Base which, while retaken, still remains destroyed. With the base rebuilt, Forge amasses a large assault force and launches an attack on the Covenant position outside of the base which includes a Covenant citadel and an anti-vehicle barrier blocking progress forward. Forge's assault force is able to eliminate the Covenant forces and take down the shield wall. Discovering the detonator for the charges in the opening to the Relic, Forge's troops destroy it, ending the Covenant attempt to blow up the Relic. With that danger eliminated, Forge secures the area for Anders to come down and join him.

Scene opens with John Forge crawling to the edge of a cliff over looking a Covenant encampment.

Forge takes out a pair of binoculars and observes a Sangheili, identified as an Arbiter, overseeing the Covenant activity. The Sangheili is approached by a Sangheili Zealot.

Forge, looking through the binoculars, watches Unggoy opening the doors to the Relic.

The Arbiter looks behind him at Forge's location. The Sergeant is no longer there, and the Arbiter walks towards the Relic.

Cuts to the UNSC Spirit of Fire, then to the ship's Observation Deck, turned into Anders' makeshift lab.

Cutter enters attempting to avoid the scattered equipment. Anders is on her computer.

Anders stands up, but Cutter stops her by placing one of his hands on her shoulder.

Anders leaves with a slight grin, a view screen in lab shows the Relic entrance. Cuts to actual Relic, the Arbiter is in mid-conversation with the Prophet of Regret.

Cuts to the interior of the Relic. The Arbiter is talking with the Prophet of Regret via hologram.

Sangheili and Unggoy are seen leaving the Relic, while the Unggoy are carrying explosives.

The Arbiter turns away. 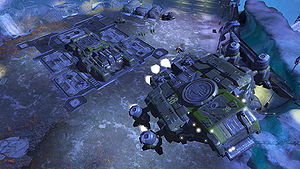 Alpha Base is reconstructed by Herons.

A Heron arrives and sets down a Firebase.

A supply pad was built.

A barracks was built, and one Marine squad leaves the firebase when trained.

A total of five Marine squads are trained.

There are two ways to exit Alpha Base. If the player chooses the way closer to the base and straight towards the structure:

After engaging a few lances of Covenant, the UNSC forces find a few deployable lookout towers in front of two Pelican wreckages.

The Marines take cover in the wreckage, and fought back the Covenant stationed on the towers.

If the UNSC forces exit from the gate further from the base and away from the structure, they find numerous Covenant machines working in front of a cliff.

Nearby, a UNSC landing pad is being guarded by the Covenant.

The UNSC forces come upon Warthogs trapped by an anti-vehicle barrier.

The UNSC forces continue on, discovering a Covenant base.

If the player loses all the units in attacking the base:

Eventually, UNSC forces breach the barrier blocking the entrance to the relic. Intense fighting occurs as the UNSC slowly makes their way toward the entrance. When they reach the entrance, they see the Covenant have set up a large detonator.

The UNSC forces successfully destroy the detonator, saving the relic.