Were you looking for the Methane recharge station? 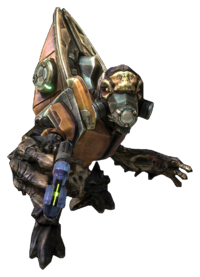 An Unggoy Minor with its conical methane tank.

Methane tanks are containers used by Covenant Unggoy, fixed onto their combat harness.[1]

Methane tanks are back mounted, moderately large, and resemble small fuel tanks of modern trucks. When they are of the large variety, they provide a place for the creatures to breathe their methane atmosphere outside of their suits. Thus, Unggoy remove their suits when entering the huge methane filled tank, as they are not needed.[1] On the battlefield, Unggoy use portable methane recharge stations to refill their methane supplies.[2]

The tanks of Heretic Unggoy look quite different from their Loyalist counterparts. Instead of being pyramid, or curved pyramid-shaped, they are two tube-shaped ones, with visible smaller tubes that connect it to their mouthpiece in which they breath the methane from.

The Covenant allow Unggoy to use various types of methane chambers when they are not in battle. There is a main chamber for the Unggoy to reside in and a smaller chamber in front where the Unggoy can change into and out of their suits.[1] These structures often have posted guards to prevent the creatures inside from being caught off guard, and airlocks on their entrances.[3] A number of different types of methane chamber exist, the atmosphere pit, which is a more temporary, ground-based version, and the methane suite, a ship-board variant.