For other uses, see Ellen.

"Nothing ventured, nothing gained."
— Anders before interacting with Forerunner technology for the first time.

Professor Ellen Anders (SN: CC-500493[2]) is a human civilian researcher. She was recruited by the Naval Intelligence Section Three as a consultant in early 2531, and was part of the crew of the UNSC Spirit of Fire at the time of the ship's disappearance in that year. 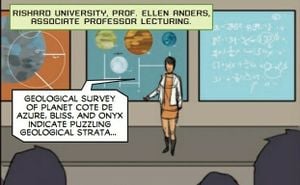 Ellen Anders was born on the colony of Arcadia. She apparently studied under Dr. Catherine Halsey (though their relationship was tense) with neither holding the other in a fond regard.[3] At some point prior to 2531 she became engaged to an unknown person. In 2531, she was lecturing on Theoretical Xenobiology at Rishard University. When stopped on the street by a nondescript stranger, she was told that Dr. Halsey had recommended her as a "consultant". Anders told the man that there was some mistake, as she was not on speaking terms with "that woman". Despite her refusal, a car pulled up and the man dragged her in before speeding off. The man and his accomplices - ONI agents - brought her to an undisclosed location. Anders was furious and demanded to know why she was kidnapped. They showed her classified images of the Covenant on Harvest and snippets of intercepted communications, which referred to the planet as a "Treasure World". This piqued Anders' interest, and she agreed to assist ONI in deciphering the Covenant's motives and nature. She was given "unrestricted" (presumably broad, but limited to her field of study) access to ONI equipment and resources. She then traveled to the Epsilon Indi system aboard an ONI vessel UNSC Last Gleaming, where she reviewed the data on the Covenant. While on board, she determined that, while the Covenant was looking for something, they were also trying to hide something as well. Later, she was relocated to the UNSC Spirit of Fire.[4]

Before arriving on the Spirit of Fire, she put in a request for better quarters once aboard and an audience with the captain.

Cutter: "What made you choose my observation deck as your lab, Professor?"
Anders: "I like the view. It adds... perspective to my work."
— Cpt. Cutter and Anders aboard Spirit of Fire

Anders and Sgt. Forge inside the Forerunner Relic.

Aboard the Spirit of Fire, Anders was loaned the Observation Deck for a workspace, claiming the view of surrounding space "added perspective to her work". Her assigned minder, Sergeant John Forge, was somewhat less agreeable with her, as the two were basically polar opposites and bickered constantly.[5]

After getting some unexpected readings on an EM band in Harvest's north pole, Anders requested that a Hornet squadron en route to Rally Point Baker be diverted to investigate. A large Covenant ground force was subsequently discovered, and Sgt. Forge was dispatched to observe further.[6] A structure of unknown origin on the surface, the target of Covenant excavation, drew her attention, and Anders resolved to investigate further in person, despite protests from Forge.[7] Captain Cutter supported Anders, but ordered that she be extracted should there be any sign of danger. Upon entering the Relic, she uncovered only a holographic map of the Galaxy, not quite "what [she] expected". A Covenant ambush interrupted her examination of the structure, but was successfully repelled by Forge and Anders' Marine personal security detail.[8] After examining the artifact, she realized that the map had led the Covenant to Arcadia, and upon her recommendation, the Spirit of Fire set course to the planet with all due speed.[9]

On February 6, Anders sent her father an analysis of Homer's Odyssey, actually a coded report of her discoveries, that slipped past ONI censors, leaving the analysis unchanged to her father.[10]

Anders being captured by Ripa 'Moramee.

"There's something there, Captain, and I think it's important we get to it before the Covenant do."
— Anders persuading Cpt. Cutter to go to Arcadia

Over the course of the Spirit of Fire's travels, Anders softened towards Forge, especially after noticing how much he cared for those around him.[5] During the Battle for Arcadia, Anders used modified Rhino tanks to blow through a shield dome, revealing a half-built Scarab, and a complex of ruins underneath. The UNSC Marine force on the surface destroyed the Scarab,[11][12] but during an investigation of the site, Anders and Forge were attacked by the Arbiter Ripa 'Moramee. When Forge was about to be killed, Anders gave herself up as a hostage to save the Sergeant's life. Forge persuaded Cutter to mount a rescue mission.[13]

"I know it's been a tough call, Captain, but it's the right one."
— Anders about Cutter's decision

The Spirit of Fire followed Anders' signal to a previously unknown shield world. Meanwhile, she was imprisoned on top of the Apex Site, where the High Prophet of Regret intended to use her status as a potential Reclaimer to activate the Sojourner-class dreadnoughts.[14] Anders used a teleportation pad to escape to the surface while the Arbiter and the Sangheili Honor Guardsmen were distracted by the majesty of the ships which had been activated by Anders' touch to the control console as a Reclaimer. Shortly after she teleported, she was threatened by a number of Flood infection forms, and only narrowly rescued by Forge. The latter's Pelican was shot down immediately after, but both were successfully evacuated by Pelican after a brief overland trek.[15]

Anders devised a plan to use the Spirit of Fire's Shaw-Fujikawa Translight Engine to cause the artificial sun inside the Shield World to go supernova, thus destroying the ships (and any other Forerunner technology) before the Covenant could make use of them.[16] Forge and Red Team encountered complications, in the form of Sangheili intervention, and Forge stayed behind to manually overload the reactor. After narrowly escaping the exploding Shield World, the Spirit of Fire set a course for the nearest UNSC forces under conventional power. Two weeks later, Cutter forced Anders into cryo-stasis, stating that she got them all out of there alive. As the pod closed, Anders reminded the Captain that not all of them had survived.[17]

On January 1, 2537, six years after the events on the Etran Harborage, one of the ship's technicians, who had been awakened by Serina in order to conduct routine maintenance aboard the ship, was attacked and infected by a Pod infector, which had been nesting out of sight aboard the ship since the escape from the shield world. In response, Serina imposed a quarantine on the ship's cryo bays, inadvertently allowing the Flood to mature further and breed new infection forms that proceeded to attack other crewmen still in cryo-sleep. As the Flood threatened to breach quarantine, Serina awoke Anders and Jerome-092, who, with her aid, was forced to exterminate all infected crew members, ensuring the survival of the Spirit and its remaining crew. After all traces of the Flood parasite aboard the Spirit of Fire were erased, Anders returned to cryo-sleep.[18]

In 2559, after 28 years of being in cryo sleep, Ellen Anders and the rest of the crew of the UNSC Spirit of Fire were awakened in orbit above the Forerunner Installation 00. There Anders and the crew encountered the Banished, led by the Jiralhanae Atriox.[19]

Anders learns how the Human-Covenant War ended and the Sangheili alliance from Isabel.

Anders participated in the battle by studying the Ark's teleportation network. She was able to gain access to the elevator that led her to the Cartographer, enable her to find more information about Ark itself. When UNSC Spirit of Fire was attacked by the Enduring Conviction, Anders formulated a plan with Captain Cutter and Isabel to use Installation 09, which was stored inside the Foundry of the Ark, as a distress beacon. They planned to send it to the original site of Installation 04, which is in range of Reach comms. Due to their current situation, however, Cutter couldn't approve the plan until they found a way to defeat the Enduring Conviction. Isabel, at that moment, formulated a plan to do just that.

Once the plan had been set, Anders went to one of Forerunner Particle Cannon to disable the Banished's carrier, while Douglas-042 and UNSC protected her from the Banished's attack. After a short period, she managed to immobilize Enduring Conviction and disable its shields once the cannon gathered enough power to fire. When the job was done, Anders did not return to Spirit of Fire; instead, she went to the Foundry to take control of Installation 09. En route to Installation 09's control room on, the UNSC spotted Retriever Sentinel. Anders managed to temporarily seize control of Retriever Sentinel, allowing her to disable the shields around control room, giving her, Red Team, and UNSC enough time to set up defensive perimeter. While UNSC fended off the assault from the Banished, Anders disarmed the firing system and began to set up the beacon. While setting the beacon up, Anders found the controls for the installation's gravity anchors. Utilizing this newfound advantage, the UNSC began to go on offensive and managed to surround the remaining Banished on Installation 09, trapping them. Once the Banished were trapped, Anders activated a shield barrier around the section they were on, and ejected it into space, disintegrating the section and presumably destroying all Banished forces on it. As UNSC were exfiltrating to theSpirit of Fire, Anders realized that the installation had already begun to enter slipspace, making it impossible for her to evacuate in time. The installation then entered slipspace, taking Anders with it.

En route to the original site of Installation 04, the ring prematurely and unexpectedly dropped out of slipspace, piquing Anders' concern. Heading back to the surface to see what had happened, she was quickly confronted by a Guardian construct.

Anders is highly intelligent, with a recorded IQ of 180.[3] She somewhat personifies the 'absentminded professor' stereotype, with a characteristic disregard for personal safety, in particular during potentially dangerous scientific endeavors. She appears to hold a particular grudge against the Covenant, and like many involved in the war effort considers her work to be for the good of humanity as a whole.[20]

According to Personnel_profile #21_873_B1_, Anders buries herself so deeply in her work that she forgets the people around her. Despite this, she was one of the few humans with any information that something larger was happening.[21]

Anders showed herself to be brave, offering herself up to Arbiter Ripa 'Moramee to save the life of Sergeant John Forge. Anders' appeared to believe in the motto "nothing ventured, nothing gained" as she said it before she activated the relic on Harvest[8] and on a gambit, activated a teleporter pad on the Apex Site of Trove to escape 'Moramee's clutches.[15]

Anders started off having a rocky relationship with Sergeant John Forge, the man assigned to protect her. Anders appeared to take some amusement from Forge's forced assignment, giving him a smirk when he complained about "babysitting duty again."[11] However, she was willing to sacrifice herself to Ripa 'Moramee to save Forge's life.[13] When Forge rescued Anders from three Flood infection forms, while she didn't react to Forge's sarcastic comments and request for a thanks, Anders called Forge by his first name for the first time.[15] After Forge sacrificed himself to destroy Etran Harborage, Anders expressed grief to Captain James Cutter before entering cryo-stasis.[17]