Avitus,[1] also known as "Thrallslayer",[4] is a Jiralhanae chieftain and formerly a high-ranking commander within the Covenant's military.[2]

Avitus was born on the Jiralhanae homeworld of Doisac on April 17, 2493. Early on in his military career within the Covenant, he was put in charge of quelling heretic factions on Covenant worlds that were slow to meet High Charity's demands for new tithes. These exploits earned him the title of "Thrallslayer" and drew the eye of the Prophet of Regret. Avitus secretly had no real loyalty to the Covenant and only served because of his immeasurable bloodlust and the praise of his brothers-in-arms.[1]

Avitus was deployed with the Fleet of Glorious Interdiction by the Hierarchs to serve alongside Arbiter Ripa 'Moramee under the Prophet of Regret during the Harvest campaign, despite his strong dislike of the Sangheili in general and 'Moramee in particular.[5][6] During the campaign on Harvest, he grew to respect humans for their different nature and unfailing courage in the worst of situations,[2] far more than he respected any species within the Covenant.[1] He enjoys eating thorn beast, which he prefers to be cooked rare, as well as hearing aggerated tales of his adventures, told by an overweight Unggoy who serves as his official scribe. His love for thorn beast pushed him to violence in 2528, when he tore apart two Unggoy because his thorn beast had been overcooked. The Unggoy were subsequently discovered as five organic chunks strewn about his quarters.[5]

At some point, the UNSC created Target_profile #43_867_37_, reporting that Avitus was looking to regain some political clout within the Covenant.[2]

In 2531, after the Fleet of Glorious Interdiction discovered Trove, 'Moramee ordered Avitus to accompany Regret when the Hierarch evacuated the shield world aboard the Sinaris-pattern heavy destroyer Proclamation's Tithe. 'Moramee's intent was to prevent Thrallslayer from earning any glory in the ensuing battle against the UNSC Spirit of Fire, but his actions would only ensure the Chieftain's survival while the Arbiter himself perished at the hands of human forces. Avitus would survive the battle and continue to serve the Prophet of Regret until the end of the war.[1]

After the Covenant fell, Avitus returned to Warial, one of the natural satellites of Doisac, and began restoring his clan's position. Years later, promises from Escharum brought Avitus back to the battlefield not as a worshipper of the Covenant, but as a bloodthirsty Chieftain within the Banished.[1]

Possessing uncanny intelligence that complimented his violent nature, he is a dangerous foe despite his relatively small stature.[7][8] 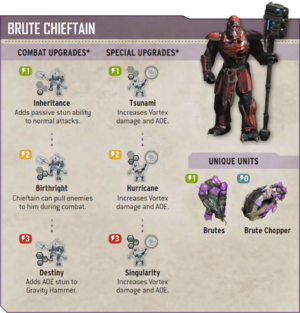 Thrallslayer will be automatically deployed as soon as the player finishes their first Temple. If that Chieftain is killed the player can purchase another for 400 resources, but can only have one Chieftain at a time. Thrallslayer uses a gravity hammer in combat and cannot hit aircraft unless using vortex.

When activated, a spiraling vortex appears, tearing everything apart in range and explodes when canceled, causing additional damage.