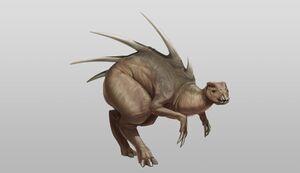 The thorn beast, known to the Forerunners as Saaliban,[1] is a docile herd herbivore used for food and other resources by the Covenant and the Jiralhanae in particular. Following the empire's collapse, Jiralhanae still use them.[1]

Thorn beasts were fostered on numerous worlds by Forerunner Lifeworkers following the activation of the Halo Array as part of an effort to rebalance struggling ecosystems. One such planet was Doisac, the homeworld of the Jiralhanae. Thorn beasts became particularly important to the Jiralhanae following the First Immolation when they were one of the few herbivores to survive the effects of nuclear warfare.[1]

The thorn beast has both totemic and practical significance in Jiralhanae culture, with every element of its body being used for food, tools, or chemistry.[1] Chieftain Maccabeus enjoyed eating the ball of muscle under the smallest of the beasts' thorns when it was properly prepared, and the commander known as Avitus enjoyed it immensely, saying that it was "both an appetizer and a dessert." Thorn beast is served with the spines pointing upwards and legs splayed outward. The head and neck are removed prior to consumption in order to avoid ingesting their neurotoxins. Entrails are often used to make dipping sauces.[2]

When the Jiralhanae vessel Valorous Salvation landed on Beta Gabriel and the Jiralhanae began hunting the humans there, it was remarked that one Brute named Brother Golubus came close to making the fatter humans taste like thorn beast.[3] In addition to being used as food, Jiralhanae have been known to use thorn beasts as a source of leather. Chieftain Hekabe used cloth and thorn beast leather to wrap a Forerunner artifact in his possession.[4] The ease in which thorn beasts adapt to new environments led the Covenant to seed the species on multiple worlds, unintentionally mirroring the efforts of their gods.[1]

Thorn beasts are named for the five "thorns" that ridge their spines, protruding from the tan-colored hide that covers their bodies. Their heads have four dark eyes with two on each side of a set of nostrils. Thorn beast mouths are framed by tooth-like protrusions that form a kind of beak. Their arms each end in a trio of long claws and their digitigrade legs end in three-toed feet.[1] A thorn beast's head and neck contain high concentrations of neurotoxins; likely a defensive adaptation against predators.[2]

Known to be fairly docile herd animals, thorn beasts are herbivores than can easily self-adapt to the conditions of new worlds. A population of thorn beasts can become completely accustomed to a new environment in as few as three generations if properly attended.[1]

Thorn beasts were originally meant to appear in Halo: Combat Evolved, but were one of creatures cut from the game. The thorn beasts were going to be rideable creatures for Marines before they were cut for AI issues.[5] Thorn beasts were eventually brought into Halo canon with the release of the 2007 novel Halo: Contact Harvest.

They were later intended to appear in Halo Wars, appearing in the E3 2008 build of the game. The developers stated that they would have reacted to units and battles around them. In the videos, however, they merely ran away from units, not battles; if there was a bombing next to it, it wouldn't have flinched. However, since the videos were made as the game was still in development, this lack of a reaction may have been changed for a more realistic gaming experience if the creature would have made the final cut. The creature was ultimately cut from the development of Halo Wars.[6]

Thorn beasts were also re-considered for inclusion in Halo Infinite as a part of the extensive ambient life intended for the game, and received a concept pass by artist Sergey Snegirev but were cut.[7]

In Halo Mash-Up: Minecraft Evolved, some horse mobs are retextured to look like the Thorn Beast.