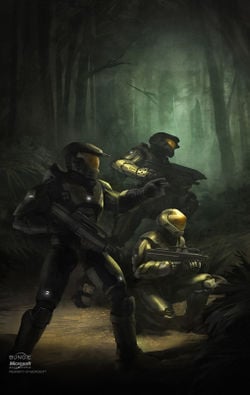 A powered exoskeleton is a mobile machine consisting primarily of a skeleton-like framework worn by a person and a power supply that supplies at least part of the activation energy for limb movement.

Powered exoskeletons are designed to physically assist and, in many cases, protect the wearer. They may be designed to assist and protect soldiers and construction workers, or to allow people to survive in other dangerous environments. A wide medical market exists for powered exoskeletons to provide mobility assistance for aged and infirm people. Other possibilities include rescue work, such as in collapsed buildings, in which the device might allow a rescue worker to lift heavy debris, while simultaneously protecting him from falling rubble.

The MJOLNIR Powered Assault Armor designed by Dr. Catherine Halsey is the most sophisticated UNSC powered armor project so far. As one of its main strengths, the MJOLNIR system eschews traditional mechanized joints in favor of a strength-enhancing layer of electroactive liquid crystal and provides a cybernetic link which boosts the wearer's reactions by a factor of five.[1] While it is the most successful UNSC powered armor project, MJOLNIR is by no means the only effort to physically augment soldiers in combat. The HRUNTING Mark III [B] Cyclops and the HRUNTING/YGGDRASIL Mark I were exoskeleton systems derived from earlier prototypes developed by exoskeleton programs which predated MJOLNIR.[2] Large-scale powered exoskeletons became more common in the years following the Human-Covenant War, with at least one model, the Mantis, seeing battlefield use.

The Semi-Powered Infiltration armor predominantly used by the Spartan-III supersoldiers provides modest physical enhancement[3] as well as a rudimentary active camouflage by means of photoreactive panels, allowing covert operations in enemy territory.[4] RKD, an Earth think-tank, created Project HAYABUSA concurrently with MJOLNIR and while the two were developed separately, they share many characteristics, and are interchangeable to a degree.[5]

In 2558, Michael Crespo wore an older suit of ODST armor from the early Human-Covenant war, which apparently had an exoskeleton installed in it. It was noted to be significantly less capable than MJOLNIR Powered Assault Armor.[6]

The Forerunners' personal armor offered powered support to some extent. For combat use, they also developed armor suits known as combat skins, using a class system based on numbers, on which the MJOLNIR Mark V[7] and Mark VI[8] would be rated Class 2.