"Think of it as the Warthog’s more spacious and robust cousin — perfect for crashing Banished house parties with and taking on scenic drives."
— Jeff Easterling[1]

The M15 "Razorback" Light Tactical Vehicle is a vehicle in service with the UNSC Marine Corps.[1][2]

The M15 Razorback was initially designed as a specialized offshoot of the ubiquitous Warthog, and was eventually modified over the years to incorporate data from testing programs on a number of virtually uncharted worlds. The Razorback's increased armour and payload capacity ensure the vehicle is a viable option on the battlefield even when not mounted with weapon systems.[2] The Razorback employs a visually similar chassis to the Warthog, albeit with a fortified windshield and a bumper reinforcement. Like the M831 Troop Transport Warthog, the roll cage also extends from the middle of the vehicle to its rear section.[1] 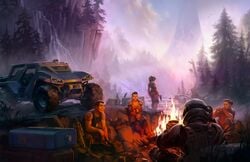 A group of Marines on Installation 07 setting up camp alongside their M15 Razorback.

In 2552, Janissary James stole a Razorback near New York City on Earth to joyride with some friends, and "turtled" it. She was arrested after being caught trying to return the gate pass they had used to steal it. The vehicle would be found after Janissary's arrest, and a police officer asked her if she was aware of the event as part of a PQI test.[3]

The M15 Razorback most notably saw use during the Installation 07 conflict in 2560.[1]

The Razorback was debuted in the installment Halo Infinite. 343 Industries writer Jeff Easterling has described the vehicle as "more spacious and robust" than the Warthog.[1] The Razorback has the capacity to store items such as detached turrets, power weapons, fusion coils, and objectives in a storage compartment on the back of the vehicle.[4] In Halo Infinite's campaign, the Razorback can hold up to five passengers, while in multiplayer it can only hold up to three. In the campaign, the Razorback can become one of the most lethal vehicles in the game by loading it up with Marines equipped with power weapons such as Flaktura Workshop Skewers or M41 SPNKRs.

Reflecting its close relation to the similarly-named M12 Warthog, the Razorback is named after domestic pigs that have gone feral in Australia and the Americas.