New York City, abbreviated as NYC,[3] is a major city on Earth. By about 2542, it is the most populous city in all of the United Republic of North America.[1][2] 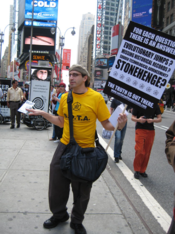 A member of the Society of the Ancients in Times Square in 2007.

On July 15, 2007, members of the Society of the Ancients attempted to spread their ideas regarding past alien visitors to pedestrians in Times Square.

The city, as with the rest of the United States, was eventually a part of the United Republic of North America prior to 2542.[1] The association of the city with the United Nations has resulted in numerous UNSC facilities across the URNA.[4]

Gangs (and Spartans) of New York[edit]

By 2552 New York City was home to the Morelli family: Jason, his wife, Bonita, and their son, Jersey. The three of them lived together in a four-level. One other family who lived in the tenement was the James family, comprised up of Jim, and his daughter, Janissary, or Jan. That year, Jersey's personal computer was invaded by a confused fragment of Melissa, an artificial intelligence construct from the UNSC Apocalypso, an Office of Naval Intelligence prowler. Jersey named the fragment Durga. The only thing Durga could remember was that she liked to investigate things, so Jersey asked her to get information on his neighbor, Jan.[5] The AI compiled an extensive amount of audio files from the chatters of people around Jan in order to build a picture of her life, and eventually began spying on others as well via the wider ChatterNet, including individuals as far as Boston.

After learning that she possessed unique physical abilities that superseded those of baseline humans, Janissary visited a moons parlor, Sharfie's to try her hand at the game. There she ended up saving a man about to be murdered by a gang by beating its leader, Thin Kinkle, in moons. Later, she was approached by a man who had a friend, Gene Lindsey, interested in joining Kinkle's gang. The man told her that his friend was supposed to prove himself by doing something they could hold over him forever, namely a rape. The man asked if Jan could offer any help to his friend, and Jan agreed to intervene in the situation.She rescued the would-be rape victim and gravely injured everyone involved. After this, Thin Kinkle somehow managed to kidknap her in retaliation and bring her to his base of operations. The gangster proceeded to torture his captive with a device called a Cupid's Knife. Her father attempted to rescue her, but was captured as well. Kinkle shot and killed him in front of Janissary. As soon as Jan's situation came to the attention of Durga and Jersey, Durga remotely shut down all the security apparatus at the location. This allowed Gilly, Jan's mother, and a former Spartan-I, to infiltrate the building and rescue her daughter, killing everyone else inside in the process. Only Thin Kinkle himself managed to escape. At the funeral for Jim, Jersey approached Jan and told her everything Durga had unearthed about Kinkle and who he worked for: the mob boss, Monster Ann. With this knowledge, Gladys Wilson, Gilly, and her daughter went to the Crystal Security building and Gilly personally killed both individuals.

When the Covenant arrived at Earth on October 20, New York City was filled with the sounds of sirens alerting the populace to the threat.[6][7]

The UN General Assembly Hall of the United Nations Headquarters.[8]

Coney Island was another island in the city.[9] The United Nations headquarters were located in New York City.[4]

By 2552, there are at least two United Nations Space Command military bases located within the New York area. One of these bases is designated Paris 23 and is found in Bergen County, formerly of the state of New Jersey.

The Waterfront Hotel has a restaurant which serves many foods, notably tuna.[5] Hot 'n' Cold is a café with a beverage dispenser and coffee machine.[10] Sharfie's is a parlor dedicated to playing the game moons, in the bad part of New York City that is known as a place police officers don't patrol. There is at least one casino in the city.

New York City has the reputation of being a "big media-advertising town". Only Beijing in China rivals it in this respect. Most people on Earth working in media and advertising, especially journalists and photographers, live in one of these two cities.[11]

One of the companies that could be found in NYC in 2552 was Crystal Security. Crystal Security, however, was actually a front for a crime syndicate led by an individual that went by the name of Monster Ann. 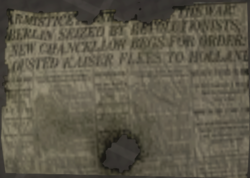