"Don't be spoiled, don't start a fight. Always be careful, here at night. Because the Spartans might come, in suits that weigh half a ton. And they'll steal from you all you gots, just like they did from Colonel Watts."
— Insurrectionist children's rhyme[4]

Colonel Robert Watts was a human insurrectionist leader of the United Rebel Front.[2] Formerly an officer of the UNSC Marine Corps, Watts defected from the UNSC after growing sympathetic to the insurgents he once fought against. Watts led numerous campaigns against the Unified Earth Government, particularly from the Eridanus system, and was responsible for establishing the URF.[1] He was eventually captured by Spartan-IIs of Blue Team in 2525.[5]

Robert Watts was born on the human Inner Colony of Mars on August 16, 2455.[1] Raised in the Epsilon Eridani system, Watts eventually enlisted in the UNSC Marine Corps.[6] Watts led forces on the frontlines combating militaristic independence movements throughout the Outer Colonies prior to the outbreak of the Insurrection, where he became a decorated and highly regarded commander of the Marine Corps. In the late 2480s, Colonel Watts became disillusioned with the policies of the Unified Earth Government after first-hand experiences with these separatist movements. He defected from active military service within the UNSC and joined the insurrectionist factions growing in the Outer Colonies.[1]

Leader of the United Rebel Front[edit]

With the beginning of the Insurrection, Watts soon re-emerged in June 2494 as the commander of the Secessionist Union's chapter on Eridanus II in the Eridanus system.[1][7] The Secessionist Union began preying on shipping freighters in the Eridanus system, leading to the Eridanus Government requesting aid from the United Nations Space Command.[8] However, by January 2495, Watts successfully orchestrated a takeover attempt on the government and effectively gained control of Eridanus II.[1] Additionally, Watts' forces were able to amass a small fleet of spaceships through their contacts within the Colonial Military Authority. In January 2496, the UNSC finally responded to the Eridanus Government's requests with a major offensive dubbed Operation: CHARLEMAGNE. A battle group of warships arrived at Eridanus II and engaged Watts' forces in the system, eventually breaking his hold on the planet.[7] Other insurgent factions allied with the Secessionist Union on Eridanus II were also splintered as the UNSC eliminated their leaderships.[1]

Watts eventually realigned the surviving insurgent factions in the Outer Colonies and took command of them. Branded by the UNSC as a "united rebel front", Watts came to adopt the pejorative as a badge of honor and titled his unified faction the United Rebel Front. As the Insurrection continued, Watts led insurgent forces against the Colonial Military Administration on a number of worlds,[1][7] and essentially commanded a majority of rebel activity in the Outer Colonies.[9] Eventually, Watts and the URF re-accumulated enough strength to attempt to overthrow the Eridanus Government once again; Watts hoped to use Eridanus II as a base of operations for the URF and drag the CMA into a costly guerrilla war.[1] In 2513, Watts led an armed uprising on Eridanus II. Having anticipated the attack, the UNSC engaged United Rebel Front forces as part of Operation: TREBUCHET. A UNSC fleet of carriers, cruisers, and destroyers attacked Watts' own fleet of roughly one hundred smaller spaceships,[2] while some URF forces attempted to engage UNSC forces in a ground campaign on Eridanus II. During the conflict, several assassination attempts were made on Watts' life, including one made by Avery Johnson of the Marine Corps, though none were successful. An operation to capture Watts' second-in-command was also attempted, but failed.[6] Ultimately, much of the United Rebel Front's forces in the system were decimated by the UNSC before they could properly establish a presence on Eridanus II.[1] Ordering the mass exodus of insurrectionist forces on the planet, knowing their survival in battle to be impossible, Watts was taken by Pelican to Iliad, a captured Charon-class light frigate which he used as a flagship as he coordinated both the resistance and evacuation. When Gateway, another URF warship, experienced difficulties with its slipspace drive, Watts utilized towing cables on Iliad to rip apart a UNSC cruiser that threatened Gateway and sent its debris into a collision course with another cruiser, destroying both ships. Afterwards, Gateway's issues were resolved and both ships fled the battle through slipstream space along with the surviving remnants of their fleet.[10]

The remaining URF forces regrouped under Watts' command and eventually constructed a stronghold within Eridanus Secundus, a hollowed-out asteroid located in the Eridanus system's largest asteroid belt.[1] While the UNSC Navy's Office of Naval Intelligence was aware that the rebels hid in the asteroid belt, they did not know Eridanus Secundus' location and knew very little about their strength; ONI initially believed that rebels were disorganized and lacked a leader, though they eventually realized that the insurgents were organized under the United Rebel Front and commanded by Watts. UNSC attempts to search for the asteroid were met with either a lack of results or with an ambush by superior URF forces.[2] Initially, the United Rebel Front experienced supply shortages. In 2517, Watts led a desperate act of piracy on the UNSC-registered cargo ship UNSC Dartmouth in order to acquire much-needed supplies. Despite the frigate UNSC Journeyman being less than four minutes away, he gave his men the order to board and commandeer the ship, allowing supplies to be looted in the safety of the asteroid field.[11]

During Operation: SILENT STORM in 2526, research into the background of suspected Insurrectionist Hector Nyeto revealed that he had spent a lot of time on missions with Watts. It was theorized that either Watts or Nyeto radicalized the other for the Insurrection.[12]

Watts at gunpoint by Samuel-034.

"Stop! My men are coming. You think I'm alone? You're all dead. Drop your weapons."
— Robert Watts to Blue Team, seconds before his capture[13]

Eventually, in 2525, rough coordinates of Eridanus Secundus were leaked to the Office of Naval Intelligence. ONI quickly organized Operation: TALON,[1] a mission to use the newly commissioned supersoldiers of the SPARTAN-II program to travel to the asteroid to capture Watts alive to allow ONI to interrogate him with the hopes of learning about URF movements and the identity of rebel spies with UNSC Fleet Command. Comparing the asteroid's approximate coordinates with the movements of the insurgent-captained Parabola-class freighter Laden, the Spartans were tasked with infiltrating the freighter to potentially reach Eridanus Secundus.[2]

Spartan-II John-117 was given leadership of the operation and he chose command over Blue Team—consisting of Samuel-034, Linda-058, Kelly-087, and Frederic-104—for the mission.[2] On September 14, 2525, Blue Team was deployed at the Eridanus II space docks, where they boarded Laden while the freighter was undergoing repairs. While Laden was en route to Eridanus Secundus, the Spartans soon discovered a crate filled with luxury items, to which they correctly deduced that the items were to be delivered to Watts. Blue Team tagged the crate and, upon arriving inside a docking bay in the asteroid, followed the crate to Watts' apartment while disguised as workers on the freighter. The Spartans entered Watts' apartment and made short work of his three guards. Watts was tackled by John and choked to unconsciousness, and then promptly sedated with polypseudomorphine by Kelly. Watts was locked in a crate and carried by the Spartans to a URF Pelican in the docking bay, which Blue Team used to escape the asteroid and reach UNSC Pioneer.[5]

After returning to the UNSC, Watts was imprisoned by the Office of Naval Intelligence.[14] Watts' capture essentially severed the head of the United Rebel Front, at least temporarily.[1] After Watts' capture, the United Rebel Front's entire network scrambled to find a new leader.[4] Eventually, insurgent Jacob Jiles ascended to a leadership position and replaced Watts as governor of Eridanus Secundus.[14] Rumors of Watts' captors spread throughout human space, with some believing the UNSC Marines' Orbital Drop Shock Troopers were responsible.[15] However, as Spartans became more known to the public during the Human-Covenant War, some insurgents correctly concluded that the supersoldiers were responsible for the colonel's capture.[4] During his imprisonment, Watts was interrogated by ONI operatives, though his fate following the interrogations was classified as top-secret.[7] As of 2552, Watts' fate and current location remains unknown to most.[14] 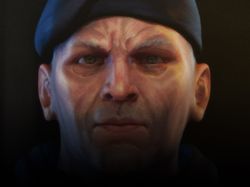 A close-up of Robert Watts.

Robert Watts was a resourceful[14] and charismatic leader who was highly esteemed by his peers. As a colonel of the UNSC Marine Corps, Watts was a highly regarded and decorated commander. Watts once was a true believer in the ideals of the Unified Earth Government, though he grew disillusioned with the government and its United Nations Space Command and its policies after years of first-hand experience with the independence movements of the Outer Colonies during his service in the Marine Corps. His experience in engagements, charisma, and success allowed him to eventually gain influence among insurrectionists and led to him creating the United Rebel Front, a unified and somewhat organized composite of insurgent cells that Watts led against the UNSC and the Colonial Military Authority throughout human-occupied space.[1] As the leader of the United Rebel Front, Watts was willing to fight alongside his forces in combat. When one of his ships was threatened by UNSC forces, Watts led his frigate against two UNSC cruisers alone to defend the vulnerable ship.[10] Watts was skilled at evasion[14] and successfully avoided many assassination attempts during his time as a rebel.[6] Throughout his campaigns against the UEG and UNSC at the Eridanus system, Watts often preferred to operate within the system's asteroid belts.[9] By doing so, he was able to avoid UNSC forces as the size of asteroid belts made it nearly impossible to search every asteroid for rebel outposts.[2]

As Watts was once a respected commander of the UNSC, his defection to the insurrectionists was devastating to the UNSC. Watts was known as "that bastard" by most UNSC personnel.[6] CMA personnel, whom by 2525 often had their loyalty called into question, commonly pointed out that Watts was a former UNSC Marine, which resulted in many bar fights between CMA and UNSC Marines.[9] Watts enjoyed luxury items, such as Sweet William cigars, high-quality New York steaks, Procyon vintage champagne, and Swiss chocolates.[16] Ultimately, this vanity allowed the Spartan-II Blue Team to track his location and capture him.[5]

In the Halo: Fall of Reach comic adaptation and Halo: The Fall of Reach - The Animated Series, Halsey erroneously states that Colonel Watts defected to the rebels in 2512. This is impossible due to his well-known insurrectionist activity as early as the late 2480s, especially as reiterated by Halo Waypoint.[1]